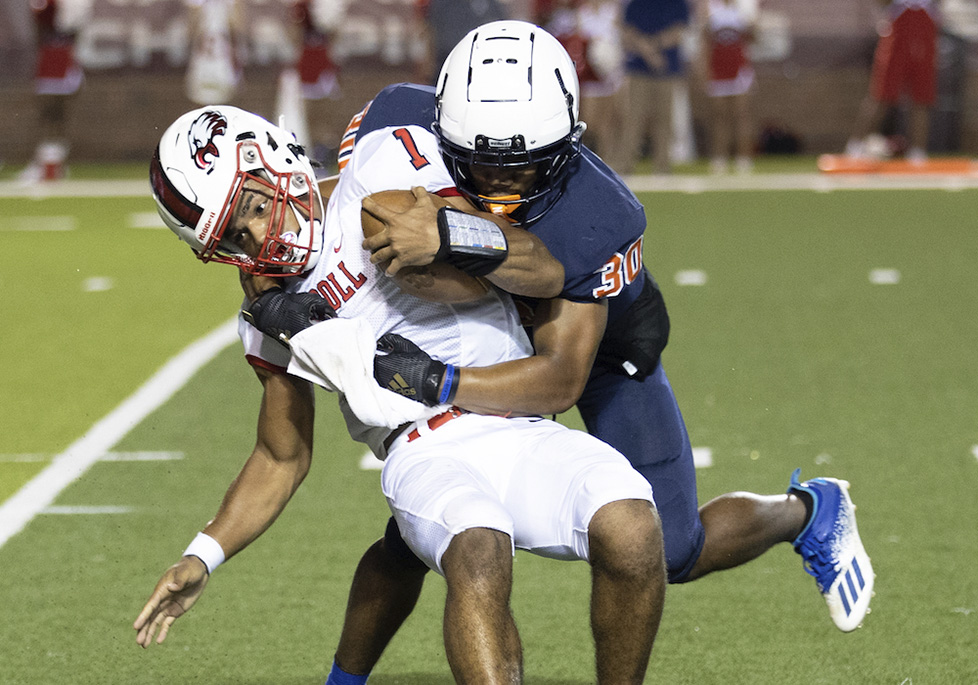 CHHS wasted no time jumping out to a lead after holding Carroll’s offense to a quick three-and-out to start the game. On Carroll’s ensuing punt attempt, a bad snap gave the Trojans the ball at the Eagle 7-yard line. On the next play, running back Zach Coleman raced to the end-zone for a 7-yard touchdown to put the Trojans up 6-0 with 9:44 left in the opening period. A two-point conversion attempt failed.

Charles Henderson added to the lead when quarterback Parker Adams found athlete Jy’won Boyd for a 40-yard touchdown pass with 4:25 left in the first quarter. Boyd converted a two-point try and extended the Trojan lead to 14-0. Trojan defensive back Mario Davenport ended the first period by intercepting a pass in the end-zone to stifle an early Carroll scoring attempt.

In the second quarter, Carroll managed to drive inside the Charles Henderson 2-yard line but Trojan defensive end Zion Grady forced a fumble and defensive tackle Philip Scott scooped it up and raced 30 yards. On the very next play, Parker heaved a 69-yard touchdown pass to Boyd to extend the lead to 21-0 with 9:21 left in the first half.

Charles Henderson drove into Carroll territory on its final drive of the half when the Trojan offense bogged down, facing a fourth-and-short. The Trojans then trotted the punt team onto the field only for kicker Nik Peerson to take a fake punt for 10 yards and a first down. A few plays later, Peerson booted a 38-yard field goal as time expired in the half to extend Charles Henderson’s lead to 24-14 at halftime.

In the second half, Charles Henderson extended the lead on a 57-yard touchdown pass from Adams to Boyd with 6:05 left in the period to go up 31-4. As the fourth quarter began, Carroll managed to drive into Carroll territory again until the Trojans forced another Eagle fumble, recovered by Trojan Quay Grimes.
Adams once again found Boyd for a 12-yard touchdown pass with 7:20 left in the game to extend the lead to 38-14. Carroll’s final scoring attempt was snuffed out when Charles Henderson defensive back Jamal Downey intercepted a Cole pass to seal the Trojan win.

“The first half was bad, we were still in the lead but it was bad football on our end,” CHHS coach Quinn Hambrite said. “We were making crazy penalties and their quarterback was elusive.

“I really can’t blame the kids for those facemask (penalties) because he’s ducking under them and they were low, where they were supposed to be, but he’s so elusive that when we grabbed cloth we were also grabbing facemask. We ended the game well and they didn’t score in the second half. We also came out on fire and that’s really all that matters.”

Charles Henderson rolled up 496 yards of a balanced offensive attack with 211 yards on the ground and 285 yards through the air, while the Trojan defense allowed 385 total yards but forced four turnovers.

Adams completed 12-of-22 pass attempts for 285 yards and four touchdowns along with rushing for 32 yards on five carries. Coleman carried the ball nine times for 57 yards and a touchdown and Antonio Frazier added 47 yards on six carries. Will Templin caught two passes for 46 yards.

Despite Carroll bracketing double coverage over him for the entirety of the game, Charles Henderson’s “human highlight reel” Jy’won Boyd was on fire, catching four passes for a staggering 178 yards and four touchdowns to go along with 57 yards on two rushing attempts. He also earned a pass breakup on defense.

“He’s magic,” Hambrite simply said. “His name is ‘Magic Boyd.’ He’s one of the best athletes I’ve ever coached and one of – if not the – best athletes in Class 5A.

“I’ve been quoted as saying that for a minute. There is no one we’ve played, no matter where we put him, that has been able to stop him thus far. That’s not me bragging or boasting, it’s just telling the truth. He’s a great athlete, a great kid and a great leader. I can’t say enough about him.”

The biggest negative for Charles Henderson was the penalties. The Trojans were flagged 13 times for a loss of 98 yards in the win.

“We just have to be good students. If we do that alone, we’ll eliminate those penalties. We have a great group of kids but we have to be disciplined in all phases of our lives. If we do that then we’ll be a successful team. I’m extremely proud of the way they competed tonight, though.”

Charles Henderson will get a few extra days of rest before hosting Opelika’s Beauregard in a non-region game on Sept. 16.