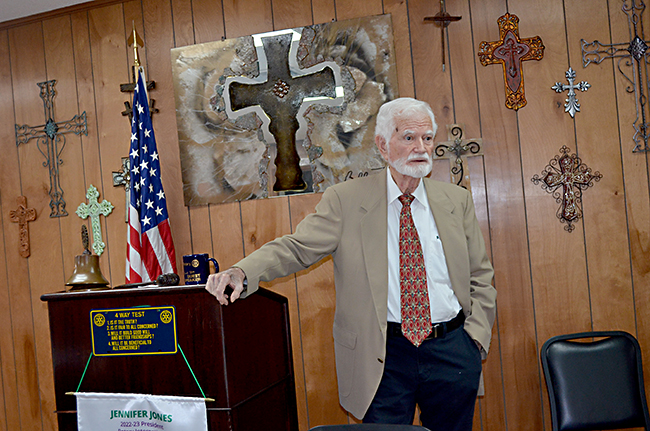 The Brundidge Rotary Club welcomed Lawrence Bowden to its Wednesday meeting. Bowden is a longtime Brundidge resident and one who is dedicated to the community in which he lives.

Bowden was the program guest of Rotarian Don Dickert.

Dickert said Bowden served his country during the Korean Conflict and, following his military service, he organized the first National Guard Unit in Brundidge and was its commanding officer.

“Lawrence was employed with the Alabama Department of Civil Defense and retired from the department after 33 years as deputy director of the agency,” Dickert said.

“Lawrence has served our community as a Brundidge City Council member and on the East Central Mental Health Board. He is a charter member of the Brundidge Historical Society and a 60-year member of Brundidge United Methodist Church.

Bowden, laughingly, told the Rotarians that Dickert didn’t suggest a topic for his presentation.

“He just told me to talk,” Bowden said and took the opportunity to look back at his hometown and those who have made decisions that continue to benefit Brundidge citizens today.

“I have been around Rotary longer than most of you have been around,” Bowden said. “My brother had a café around the corner from what was then City Hall. The Rotary Club met upstairs and I had to ‘tote’ food up to the weekly meetings. Then, I had to stay around to clean up after the meetings. I am very familiar with Rotary and all the good it does.”

Bowden, laughingly, said “back then” Rotarians could sing.

“Mr. Kyle Ramage was the song leader and, with his big, booming voice, he would get the singing started in a hurry.”

Bowden said that “back then, Brundidge was a farming town.”

“People from all around would come into town on Saturday to do their shopping,” he said. “There would hardly be walking room on the sidewalks on either side of the street.”

Times changed and, although farming continued to be way of life, off-the-farm jobs became available at, first, at “the glove factory, “then the shirt factory, and later, men’s underwear.

“Around 1940, the city took advantage of the opportunity to the buy into the area power company and became a distributor,” Bowden said. Later there was incentive for Walmart DC to locate in Brundidge. The city constructed a sewage system that provides for food manufacturing growth in the city.

Bowden thanked Dickert for the opportunity to, once again, be with the Rotarians and thanked them for their dedication to community and for their annual scholarship program for graduating seniors in local high schools.