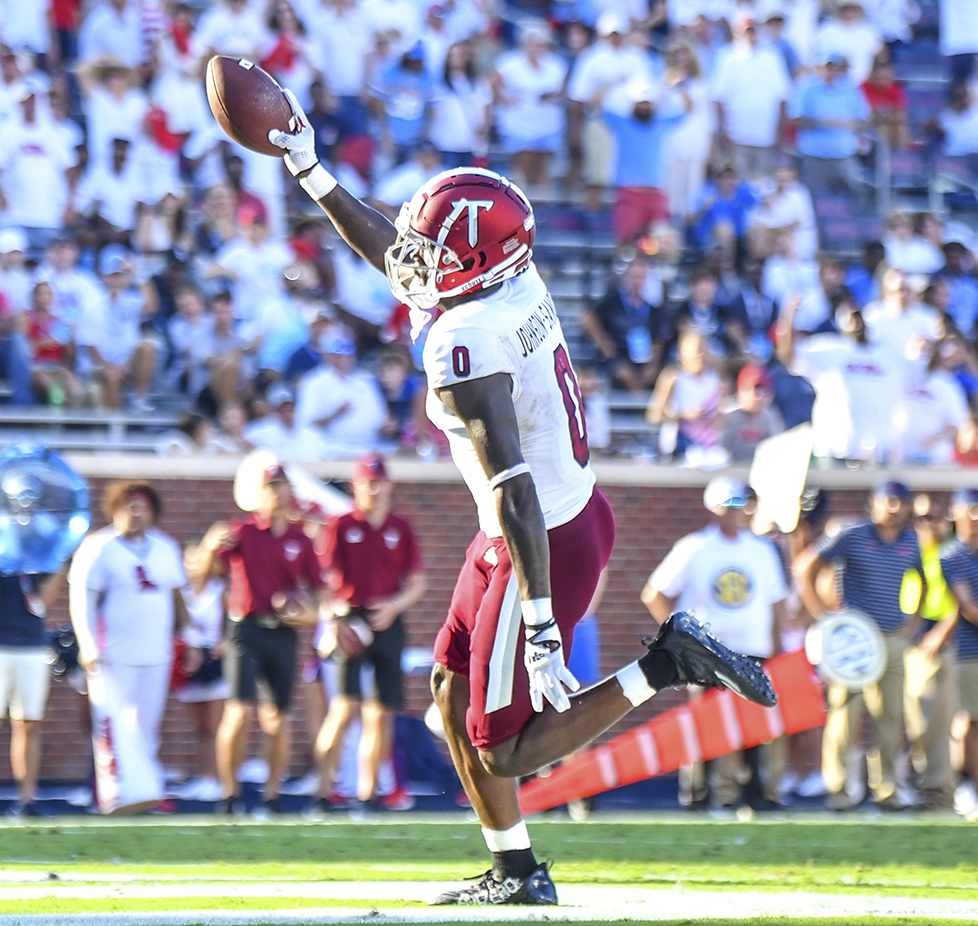 After a week one loss to the Ole Miss Rebels, the Troy Trojans (0-1) now set their sights on their 2022 home opener this Saturday against the Alabama A&M Bulldogs (0-1).

Troy is coming off a frustrating but, at times, productive 28-10 loss to Ole Miss in week one. Head coach Jon Sumrall emphasized that the Trojans were able to do some things that they had planned to give themselves a chance to win against Ole Miss.

“The plan was to control the pace of the game to lower the number of possessions (for Ole Miss),” Sumrall said. “There was 12 possessions in the game and the 12th came with one minute on the clock. That was our plan to win. We didn’t execute some things as a clean as we wanted to obviously.”

Sumrall pointed to inconsistency in the running game and alignment and procedural issues on offense that cost the Trojans, while pre-snap communication and leveraging in the running game being the main problems on defense. Sumrall said those would be focuses in practice this week.

This week, Troy welcomes FCS school Alabama A&M to The Vet, who are coming off a 59-0 loss to UAB last week. Despite the lopsided loss, Sumrall had plenty of praise for Troy’s week two opponent.

“We’re excited to play in front of our fans in our stadium playing a good football team,” he said. “They were 7-3 last year and won their last four games (of the 2021 season) and probably have more FBS transfers than any team in the country. Their roster is scattered with guys that have been at the FBS and Power-5 level.”

“I think you have to know yourself better than you know anybody. We have to create our identity, become more confident in what we’re doing and how we’re doing it and worry about our own growth and development every day this week and every rep this week.”

One of the moments during the Ole Miss game last week that was passed around social media the most was of a video of Sumrall losing his cool on an official after a Troy defender was flagged for a face mask penalty, despite the Ole Miss runner being the one that grasped the face mask. While Sumrall was penalized for a personal foul himself, the face mask penalty was waved off, but more importantly the Troy roster knew they had a coach that had their backs.

“I think our guys knew that I was going to fight for them by how I acted on that one penalty,” Sumrall said with a smile. “I wasn’t going to back down and not have energy but I was really calm (for most of the game) and just trying to learn how to do a great job of operating our team.”

Troy receiver RaJae’ Johnson explained what that moment did for he and his teammates.

“As a player you want to have that interaction with referees and communicate and talk to them but you can’t,” Johnson said. “When you have your head coach going out like that and putting it on the line it shows what he brings to the team.

“If our coach can (put it on the line for the team) why can’t the players? Coach Sumrall is able to go at the referee like that when we can’t and he’s saying what we want to say to the referees. He’s getting it out for us and when he does that it gets us going.”

The Trojans also know they have a quarterback that won’t stop fighting, too. Gunnar Watson took a number of vicious hits against Ole Miss but kept getting up and playing, and in the fourth quarter put the Trojans in the end-zone for the first time this season, as well.

“I thought he played tough,” Sumrall flatly said of Watson. “I thought he could have been a little more decisive at times with the ball seeing some things clearer. I think offensively we have to operate cleaner from a formation and getting lined up standpoint.

“Not all of that is on the quarterback but the quarterback sets the pace and tone of things. I thought he played tough and battled his tail off. He made some good throws and made some big time throws. I’m proud of him, he’s a fighter.”

Sumrall said that Watson’s toughness is the makeup of the Troy football team.

“I’ll tell you this, our locker room and our team is going to fight,” Sumrall said. “Gunnar is one of those guys that’s going to fight. We’re not going to feel sorry for us and mope around. We’ll have a positive outlook and Gunnar is going to keep fighting just like the rest of our team will.”

Troy goes into week two relative healthy with just one player considered “doubtful” for the game. Athlete Kyle Coale suffered a broken bone in his hand against Ole Miss, but Sumrall said the injury would not require surgery.

Sumrall has a unique start to his head-coaching career with connections to both of Troy’s first two opponents. Sumrall was an assistant coach at Ole Miss for a number of years, but his connection to the week two opponent is even more deep. Sumrall grew up in Huntsville, home of Alabama A&M University. His mother also received her master’s degree at Alabama A&M.

“I grew up running the stadium steps at their stadium as a high school kid,” Sumrall recalled. “I have a lot of respect for that program. I’m a football junkie and John Stallworth played at A&M. Robert Mathis also played there and I watched him play there.

“I idolized some of the guys that played at Alabama A&M. It’s a really great historic program and for me to be able to in back-to-back weeks coach against a school I coached at in week one and week two play a game against my hometown team where I grew up is a fun opportunity and a fun experience.”