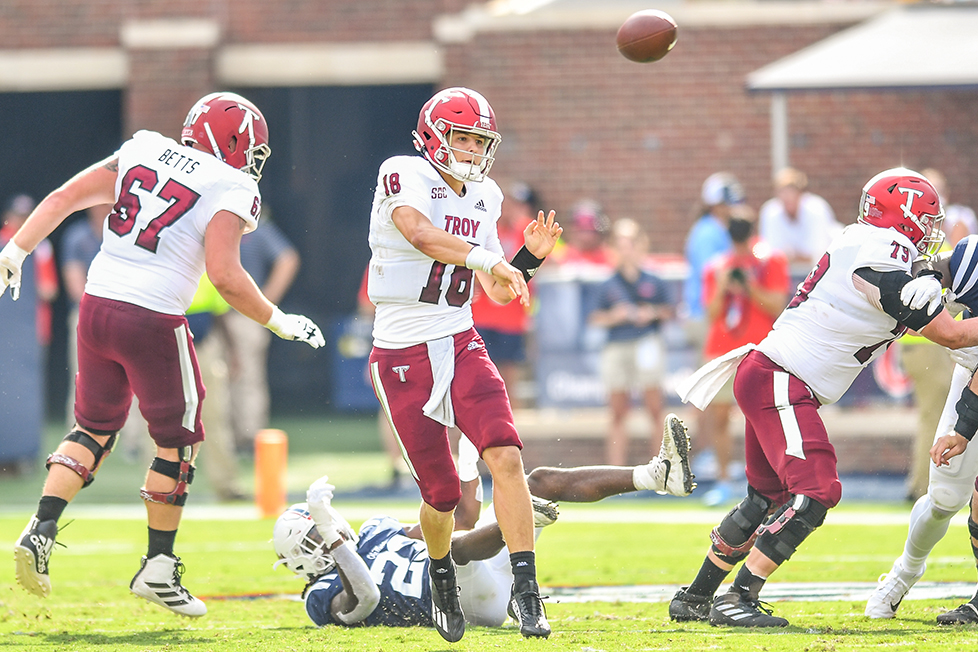 Troy started the first half doing exactly what the Trojans wanted to do, forcing stops on defense and moving the ball on offense but it didn’t take long for the Rebels to gain control. After Ole Miss running back Zach Evans broke off a 46-yard run late in the first quarter, the Rebels turned things up. Ulysses Bentley IV broke a Troy tackle in the backfield and scored on a 2-yard run to give Ole Miss a 7-0 lead with 2:25 left in the first quarter.

Ole Miss extended the lead to 14-0 with 11:51 left in the half on a 2-yard run from Jonathon Mingo and then Pike Road native Quinshon Judkins scored on a 2-yard run with 6:38 left. Finally, Troy’s defense got a stop and Gunnar Watson led the Trojans on a scoring drive that was capped off with a 30-yard field goal by Brooks Buce as time expired in the half. Still, the Rebels led 21-3 at halftime.

The story of the half was three consecutive three-and-outs for the Troy offense and the Rebels rolling up 201 yards rushing, averaging 7.2 yards per carry. Troy wanted to establish the run – as much to keep Ole Miss’ offense on the sideline as anything else – but could muster just 36 yards rushing in the half and a total of 111 yards.

Ole Miss picked right up in the third quarter where it left off in the first half as Jaxson Dart threw a 12-yard touchdown pass to Malik Heath with 10:42 left in the third quarter to extend the Rebel lead to 28-3. Troy went for it on fourth down near midfield but Watson’s fourth down pass sailed out of bounds. Ole Miss quickly got back into scoring position but Troy defensive tackle TJ Jackson forced an Evans fumble, which Craig Slocum Jr. recovered for the first turnover of the game.

On the ensuing drive, Watson’s pass bounced off a receivers hands into Ole Miss cornerback Miles Battle’s and a Troy personal foul put the ball inside the red-zone. The Troy defense answered with another turnover, however, as Markeis Colvin picked off Dart’s pass in the end-zone on the very next play. Troy drove into Ole Miss’ red-zone but facing a fourth down, the ball slipped out of Watson’s hands giving Ole Miss the ball back again.

Troy had another drive snuff out with a turnover when Jarret Doege entered the game at quarterback for the first time. Watson had to leave the game due to his helmet coming off during a sack. Doege threw a screen to Kimani Vidal, who then fumbled giving Ole Miss the ball back only for Ole Miss to cough the ball right back up with Dothan native AJ Pierce covering the bad snap up.

Watson finally got Troy in the end-zone when he threw a 3-yard touchdown pass to RaJae’ Johnson with 7:17 left in the game. Watson threw the score on fourth down despite taking a vicious hit in the process. Troy still trailed 28-10 and Ole Miss spent much of the remainder of the game running clock.

Troy’s offense totaled 346 yards with Watson completing 34-of-47 pass attempts for 275 yards, one touchdown and one interception. Vidal rushed for 48 yards on 12 carries and Barber caught five passes for 60 yards. Johnson caught three passes for 32 yards.

The Troy defense gave up 433 yards of offense and Dart completed 18-of-27 passes for 154 yards and one touchdown. Evans rushed for 130 yards on 20 carries. Troy’s defense was led by Carlton Martial with 11 tackles. Craig Slocum Jr. earned 10 tackles and TJ Harris totaled six tackles.

Troy opens up the home schedule next Saturday against Alabama A&M.