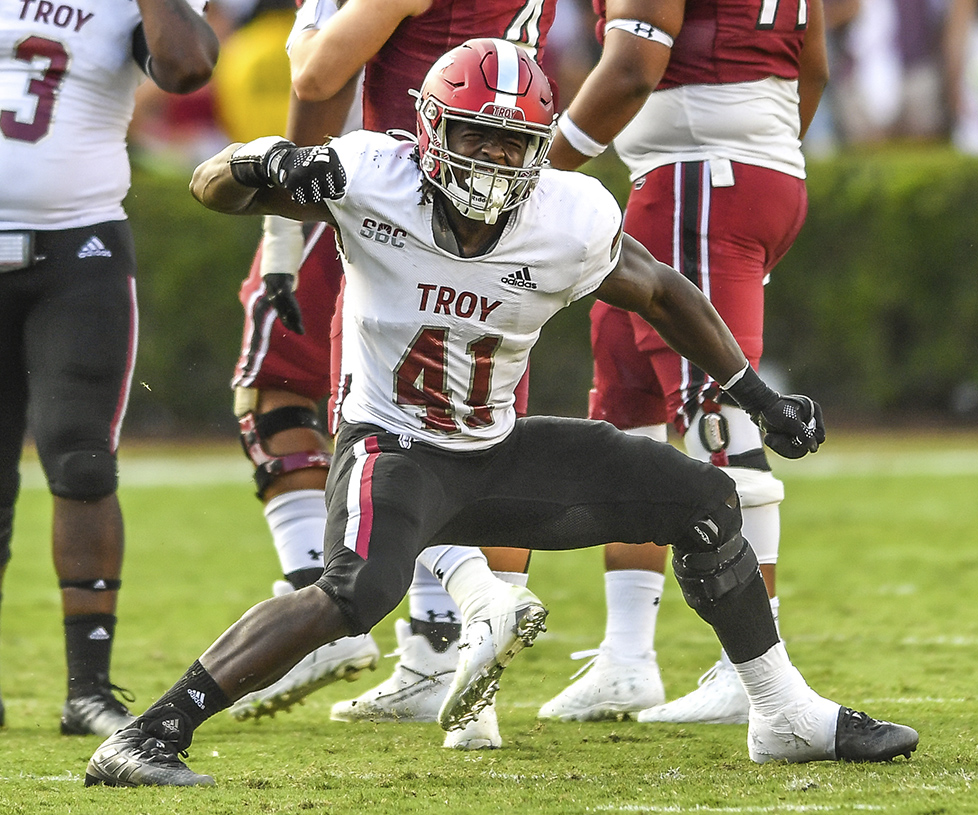 Javon Solomon (41) and the Troy Trojans are looking for an upset this Saturday at Ole Miss. (Photo courtesy of Troy University Athletics)

On Saturday, Sept. 3, the Jon Sumrall era of Troy Trojans football officially gets underway as the Trojans travel to Oxford, Miss. to face the No. 21-ranked Ole Miss Rebels of the SEC.

Troy is coming off a second straight frustrating season in 2021, while Ole Miss enjoyed some of its most success in the past decade with a 10-3 season in 2021. The Rebels ended the year as the No. 11 team in the country.

“We’re really excited about the opportunity we have in week one playing a really talented team in Ole Miss,” Sumrall said. “There is no easing into the 2022 season. We get a Top 25 opponent, which is exciting, and a team that finished 10-3 last year and ranked 11th in the country.

“It’s a great opportunity and a big challenge; it’s not going to be easy for us to go in there and get a win. We’ve got our work cut out for us, and we don’t shy away from it. It’s why we play the game.”

Troy returns a load of talent and starters on both sides of the ball in 2022 and this week announced returning starting quarterback Gunnar Watson would get the nod as the starter against Ole Miss. Troy also returns leading rusher Kimani Vidal and receivers Jabre Barber and Tez Johnson. The Trojans also boast an offensive line with four returning starters, including All-Sun Belt performers Austin Stidham and Jake Andrews.

The Trojans also boast one of the top defenses of any Group of 5 program, which includes All-Conference players like linebacker Carlton Martial, bandit Richard Jibunor, bandit Javon Solomon and safety TJ Harris. Martial comes into 2022 on the watch list for virtually every national defensive award in the country and on the verge of breaking a number of Troy, Sun Belt and NCAA records.

While Troy has revealed who will start at quarterback in week one, Ole Miss head coach Lane Kiffin is keeping his quarterback decision under wraps. Both USC transfer Jaxson Dart and Luke Altmyer were listed as starters on the Rebels’ first depth chart released this week and Kiffin has continued to hold his cards close to the vest throughout the week.

“They’re both even,” Kiffin said when asked about the quarterback battle.

Quarterback isn’t the only position Ole Miss is replacing, however, with the majority of 2021’s offensive production no longer with the Rebels. Kiffin added receiver Malik Heath, Dayton Wade and Jordan Watkins along with running back Ulysses Bentley IV, tight end Michael Trigg and wide receiver Jaylon Robinson, who played with Dart at USC, from the transfer portal.

Despite all the new faces, Sumrall believes this year’s Rebel offense may be even better than 2021.

“They have a really talented offense and Lane does a great job of calling plays and they have some really great playmakers,” Sumrall said. “They’re as explosive of an offense as you’ll see in college football. They have some new faces on (the offense) and lost a lot of production from last year but they may be improved in terms of talent.

“It starts with their tempo, they stress (your defense) with how fast they play the game. They do a really good job of play design and Lane is a really good play caller. I think he’s been a really good player caller for a long time and he’s adapted and puts you in some situations that are challenging and puts you in a bind schematically. They have really great players and even though they lost a lot they may be even more talented in terms of ability.”

Ole Miss lost one of its returning receivers on Friday, however, as senior receiver Dannis Jackson entered the transfer portal. Jackson caught 12 passes for 244 yards and two touchdowns in six games at Ole Miss in 2021.

Troy and Ole Miss will kickoff at 3 p.m. on the SEC Network on Saturday.