Journey of Hope, memories for a lifetime 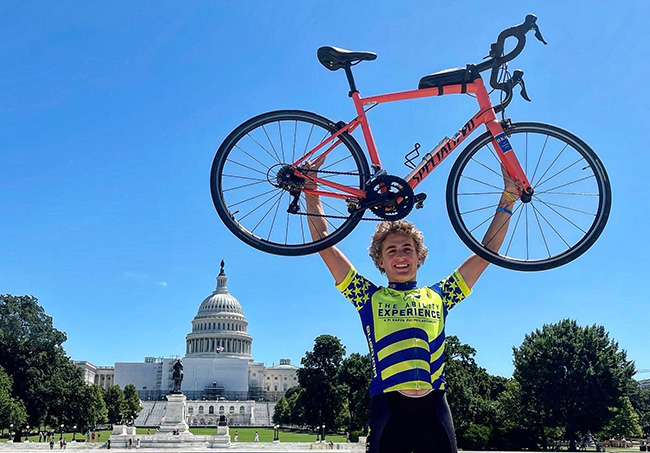 He was somewhat disappointed.

Near the end of the Journey of Hope 2022, a flat bike tire caused Russ to have to ride out the last seven miles of that day’s journey in the support vehicle.

Russ Oliver, a Pi Kappa Phi at Troy University, rode in support of the national Pi Kappa Phi’s non-profit organization, The Ability Experience. Along the long journey, the bikers stopped at different disability organizations where they had opportunities to interact and build friendships with people with disabilities.

For Russ, those stops were the joy of the ride.

The Troy University music industry major sat quietly for a moment, reflecting on what he said was the most incredible journey he could imagine.

“The journey was about experiencing so much of our country and how beautiful it is–the mountains, the corn fields of Nebraska, Highway 50 in Nevada -which ‘the loneliest road in America ‘-the ski towns of Steamboat Springs and Park City, the cities of Milwaukee, Chicago and Cleveland and, then being deep in the Appalachian Mountains was an experience I can’t describe and it’s one I’ll never forget.

For Russ, seeing northern America from the seat of a bicycle was seeing it, experiencing it, with all one’s senses – sight, sound, smell, taste, touch.

“You can’t see America like that any other way.  What an incredible journey.”

As meaningful and memorable as the ride from San Francisco to Washington DC was and will continue to be, the most meaningful part of the journey, Russ said, was the people he met along the way.

“The friendship visits are what I will remember most and always,” he said. “Hanging out with people with disabilities and seeing the joy in their lives makes you appreciate your life and opportunities even more.”

Russ talked about playing guitar with a man named John who loved Johnny Cash, and of dancing with members of a YMCA in Nevada.

He spoke of a young teen in Salt Lake who has a condition that causes tumors to form on the brain, spinal cord and nerves.

“At the age of 12, Travis, made the decision to amputate his leg because it kept breaking,” Russ sad. “He was an inspiration to me.” to all of us.”

In Denver, the bikers attended Pedal for Pennies, an event for Special Olympic athletes, bike racers.

Russ had the “privilege” to ride along with Hanna, who has Down Syndrome.

“She was a great cyclist and we won the charity event,” Russ said. “Hanna has been in Lady Gaga’s book ‘Channel Kindness’ multiple times.”

Russ said as beautiful and amazing as the ride across America’s 13 “northern” states and 44 cities was, the best and most meaningful part was the friendship visits in cities along the way.

“I’ll always remember the strength and character of those we met and how they continue to find joy and happiness in their lives,” he said.  “I would not take anything for my Journey of Hope.”

On Saturday, August 13, 2022, Russ Oliver’s Journey of Hope concluded with a 10-mile ride into the nation’s capital.

The ride brought to a close “both the longest and shortest summer” of his life and mission accomplished.

“When I saw the capitol, when I heard all of the people cheering for us. I was happy and I was excited. Then, when I saw the finish line, I realized that this experience of a lifetime was coming to a close…. I almost cried,” Russ said, and added with a smile, “or maybe I did.”