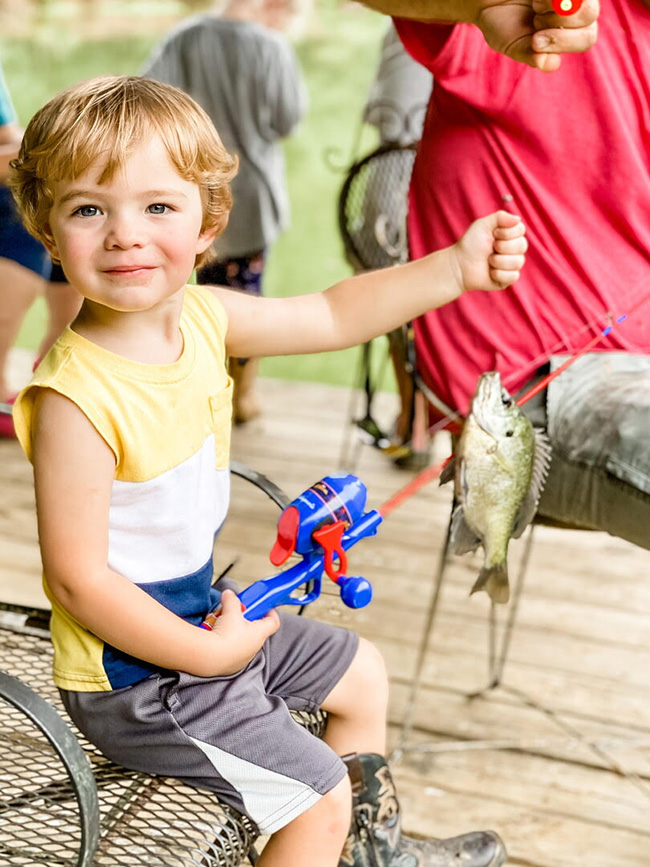 As fish tales go, this one is about as normal as it gets.

Ryker Ingram, a 3-year-old angler who lives in Troy, often fishes at a private pond owned by his grandfather, Buddy Hendrix, who said his grandchildren love to “splash around in the water” and maybe grab a rod-and-reel.

“It was just a way to have a good time,” said Hendrix, known as “Poppa” to his grandchildren.

Ingram definitely had a good time when he caught a bluegill with his Spider-Man rod-and-reel. Someone snapped a photo of the catch, and it was entered into the Alabama Black Belt Adventures Association’s 2022 Best Fish Photo Contest. The photo garnered more than 1,300 votes in online voting, winning the contest by less than 100 votes.

As the contest winner, Ryker’s family receives a prize package that includes a guided fishing trip for a day on Lake Eufaula sponsored by Tony Adams of Gone Fishing with Tony and a two-night stay at Lakepoint State Park.

“He’s really an outgoing and outdoorsy young man,” Hendrix said of Ryker. “Even at 3-years-old, he has his own side-by-side and he rides around the property. He’s definitely going to love to fish and hunt.”

Hendrix said he often fishes for crappie on Lake Eufaula and saw a social media post from Tony Adams about the 2022 Best Fish Photo Contest, which led to the submission of Ryker’s photo.

“There’s nothing quite like seeing the smile on someone’s face that showcases the thrill of reeling in a fish, and you can definitely see the sense of satisfaction on Ryker’s face in this year’s winning photo,” said Pam Swanner, Executive Director of the Alabama Black Belt Adventures Association. “We appreciate everyone who submitted photos in this year’s contest. It’s always heartwarming to see people enjoying the many amazing fishing spots throughout the Black Belt.”

The ALBBAA’s 2022 Best Fish Photo Contest is designed to allow anglers of all ages to showcase how they enjoy the bountiful fishing in the Black Belt. The winner was selected exclusively through online voting, as nearly 50 photos were submitted in this year’s contest.