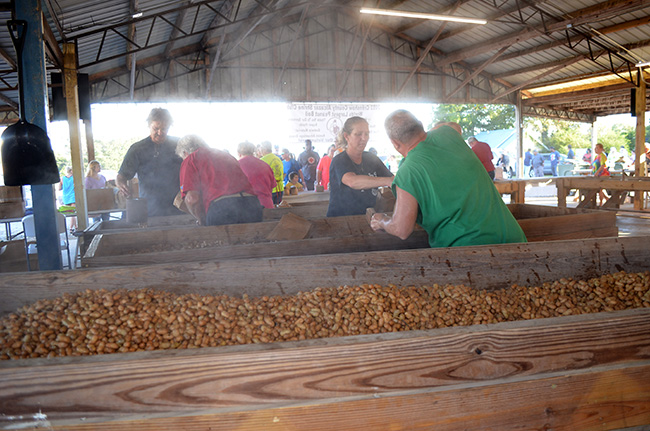 Jaine Treadwell | The Messenger The Crenshaw County Alcazar Shrine Club has been hosting the World’s Largest Peanut Boil since 1970.

Boiling peanuts, or goober peas, has been a folk culture practice in the Southern United States since the early 19th century.

And, if more peanuts have been boiled anywhere in world than in the “Friendliest City in the South,” Luverne, Alabama, let it be known.

Doubters need only to journey to Luverne anytime between the wee hours of the Wednesday morning before Labor Day until the sun sets on the September holiday.

And, more than likely, those who wait until Labor Day to go to the annual peanut boiling, will go home disappointed.

Just how many tons of peanuts have been boiled and sold, there’s no telling, Compton said.

“This year, we have 34 tons of peanuts for boiling and a ton and a half for parching,” he said.  And, the Shriners don’t expect a single peanut to be left in the “pot.”

Many of those who waited patiently in line on late Wednesday afternoon were from the City of Luverne or the surrounding areas.

“We’ve learned to come as soon as the first peanuts are boiled,” said Michelle Holley. “We don’t wait until the Labor Day beach traffic starts. If we did, we would probably go home disappointed.”

Holley has lived in Luverne all her life and, every year, since she can remember, she has gone to the peanut boil.

“The Shriners’ World’s Largest Peanut Boil is a hometown tradition,” she said. “I was raised here, so, it’s also a family tradition and a community tradition. It’s who we are.”

Holley, and the scores of those around her, expressed appreciation to the Crenshaw County Alcazar Shrine Club and the man volunteers for putting Luverne on the map with the World’s Largest Peanut Boil “and for boiling the best goobers in the land.”