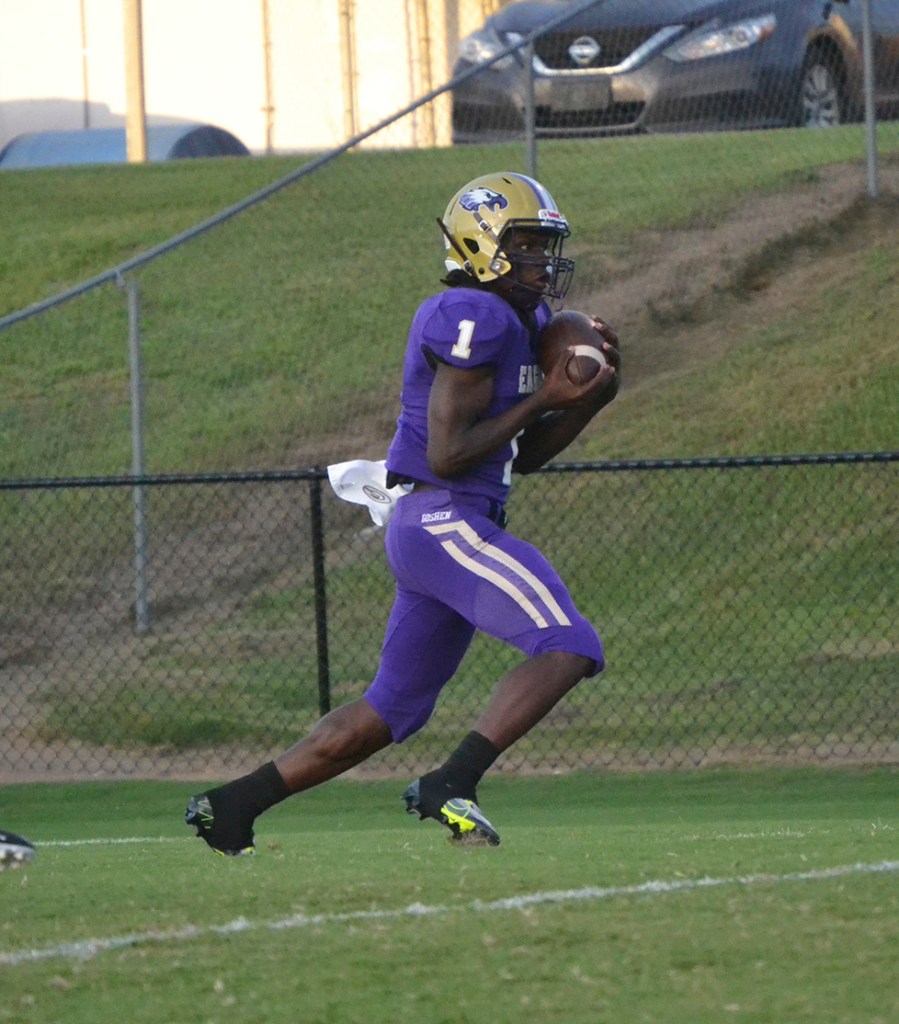 Goshen’s Jamari McClure (1) has been nearly unstoppable so far this season. (Photo by Josh Boutwell)

The Goshen Eagles (2-0) will look to remain undefeated this week as Class 2A, Region 2 play begins on the road against the Highland Home Flying Squadron (2-0) this Friday.

Goshen is coming off dominant wins over Daleville and Zion Chapel to begin the season, while Highland Home throttled Providence Christian in week one before narrowly besting Ariton 34-33 last week.

“We started off slow and sluggish (last week) but I told our kids that’s going to happen because we didn’t have a very good week of practice last week,” Goshen coach Don Moore said. “Zion Chapel is a lot better than they have been in the past and Coach (Cody) Keene is doing a really good job over there. I knew they would come after us and it took us awhile to settle in and start playing.”

Highland Home, the No. 2-ranked team in Class 2A this week, knocked off No. 4 Ariton last week with a two-point conversion in the fourth quarter. Highland Home boasts one of the more talented teams in the area with two Power-5 college prospects, including Florida State commit Keldric Faulk, who plays defensive end and receiver for Highland Home.

“They have athletes running all over the place over there,” Moore said of Highland Home. “Their quarterback is good, the Fulk brothers are good, KD (Shepherd) is good. Thye have a lot of really good players.

While the Eagles haven’t had to throw the ball much this season, senior quarterback Peyton Stamey has made sure his opportunities count. He’s attempted just nine passes in two games but has completed five of those attempts for 112 yards and three touchdowns with no interceptions. Tyler McLendon has been his favorite target, catching four passes for 87 yards and two touchdowns so far.

Region 2 is one of the toughest regions in Class 2A, so that makes every game a crucial one for the Eagles and Goshen and Highland Home have traditionally been evenly matched with a record of 29-29 all-time against one another. In recent years, though, Highland Home has had the edge. The Flying Squadron have won the last two matchups between the schools and four of the last five. The two sides haven’t met since 2019, however, when even the seniors on these teams were just ninth graders.

Moore said this week’s practices have been better for the Eagles and but his group will have their hands full this Friday.

Goshen has Reeltown and LaFayette in back-to-back weeks following the Highland Home matchup. The Eagles and Flying Squadron will kickoff at 7 p.m. from Clay Stadium in Highland Home on Sept. 2.