Patriots set for trip to the Sunshine State 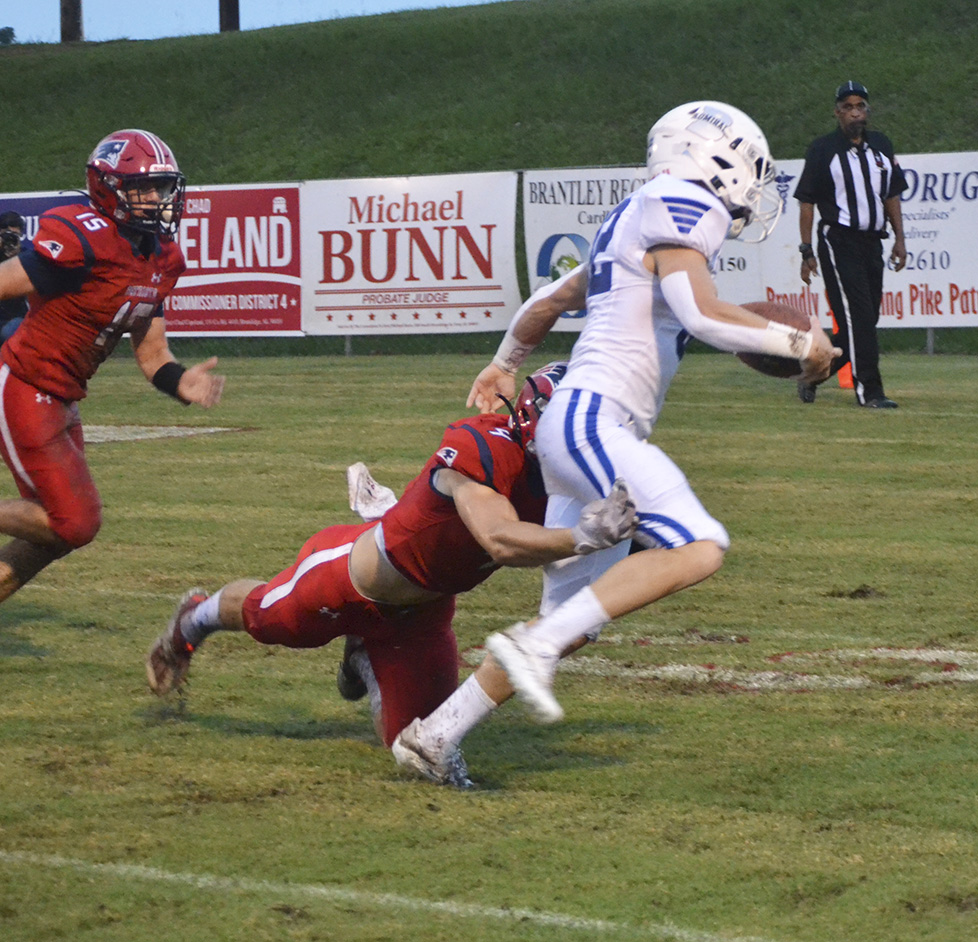 KC Bradford (4) had a big night on offense and defense last week. (Photo by Josh Boutwell)

The Pike Liberal Arts Patriots (0-2) will hit the road once again this week and start a two-game road trip to Florida, starting with a matchup with the Chipley Tigers (1-0) this Friday, Sept. 2.

Pike is coming off a 33-15 loss to Bayside Academy last week in a game that the Patriots led at halftime.

“I think we took major strides forward offensively and defensively but special teams put us in a bad spot a couple of times,” Pike coach Travis Baxley said. “We’re three plays away from being in that ball game with a chance to win.

“The takeaway from Friday is we’re not far away. It’s not about them, it’s about us and eliminating our mistakes and playing a clean football game. We’re within striking distance.”

PLAS sophomore quarterback Dawson Bradford had the best game of his young career thus far as he completed 9-of-16 pass attempts for 207 yards and two touchdowns with one interception. His brother KC Bradford caught four passes for 111 yards and a touchdown along with 22 yards on the ground. KC Bradford also earned six tackles and one tackle-for-loss on defense, while Pruitt Vaughn totaled 14 tackles, two tackles-for-loss and one sack on defense. Davis Kilcrease also had a big night with 11 tackles, three tackles-for-loss and one sack.

“Our kids are tough and play hard and fight hard and nine of our 11 guys are playing both sides of the ball and special teams,” Baxley said. “I’m always impressed with our effort, hustle and heart.

“So, that goes without saying but we’re trying to put that into opportunities to win the ball game. Playing hard is what we’re going to do here at Pike and the next step is to play hard and finish.”

Pike’s next challenge won’t be an easy one as the Patriots travel down to Chipley, Fla. to face one of the top teams in the State of Florida. Chipley is coming off a 2021 season in which the Tigers made it to the Florida Class 1A State Semifinals and beat traditional powerhouse Rutherford High School 41-0 in the season opener last week. Chipley also boasts one of the top skill players in the state in receiver Daquayvious Sorey, who committed to play college football at Auburn just last week.

“I see two really good wide receivers, they have a good quick passing game and a good vertical passing game,” Baxley said of Chipley. “They have a running back that looks athletic and fast, too. So, we’re going to get their best shot.”

One of the big problems last week for Pike was mistakes in the second half, which included turnovers and blocked punts. Baxley said that he wants to see his team limit some of the mistakes against Chipley and force that athletic offense to drive to score.

“We’re putting a plan in place to limit big plays and force them to drive on 10-play drives to score,” Baxley emphasized. “They’re an athletic football team. We had to play hard and finish. We need to limit those mistakes and play a clean football game and finish.”

Chipley and Pike will kickoff at 7 p.m. on Friday night at Philip Rountree Stadium in Chipley. The game will also stream live on the NFHSNetwork at https://tinyurl.com/yp2rx3ye.