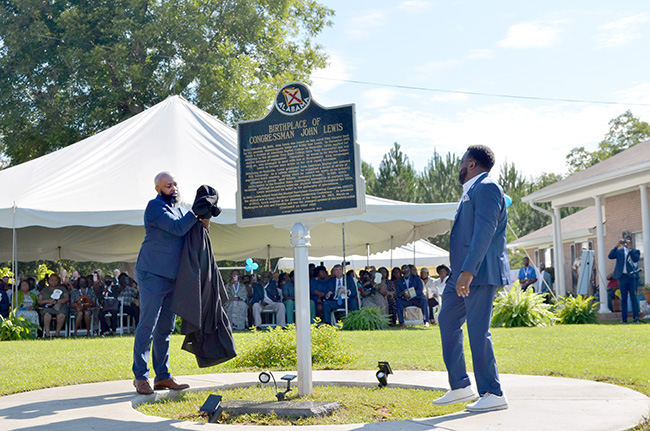 Jaine Treadwell | The Messenger Members of the family of the late Georgia Congressman John Lewis unveil a marker dedicated in his honor. The marker was placed at Lewis’ home place in the Dunn’s Chapel Community.

A marker ceremony and dedication in honor of the late Georgia Congressman John R. Lewis was held at his home place in the Dunn’s Chapel Community on Saturday, August 27, 2022. 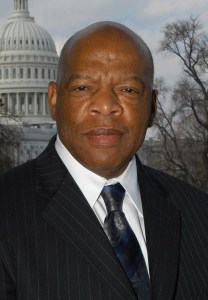 The Marker Ceremony and Dedication in Honor of Congressman John R. Lewis was attended by family members, friends, acquaintances and those who, perhaps, never met him.

Stories were shared about a young John Robert Lewis, who preached to chickens “and ate them,” about the family that supported him with love and prayers and about his lifelong journey to bring about social justice for all.

Troy Mayor Jason Reeves said, “I am so humbled (by all John Robert Lewis has done for human rights) that I don’t have words.”

The words that tell the story of Congressman Lewis are emblazoned on the historical marker that is dedicated in honor of his service to all mankind.

Born February 21,1940, John Lewis was raised on this rural Pike County land by his parents, sharecropper Eddie and Willie May Lewis. In December 1957 while a student at American Baptist college in Nashville, Lewis applied for admission to the all-white Troy State College (now Troy University) but was denied because of segregation. Thereafter, he wrote to Dr. Martin Luther King Jr, who arranged to meet with him in Montgomery. King encouraged Lewis to become more active in the civil rights movement.

Returning to Nashville, Lewis graduated from American Baptist and entered Fisk University. As a college student, he organized a series of sit-ins at segregated lunch counters, during which he coined his motto on an activist’s obligation to pursue “good trouble, necessary trouble.” In 1961, Lewis participated in the Freedom Rides challenging segregation at southern bus terminals. Although he endured numerous physic assaults throughout the 1960s, Lewis maintained his belief in the philosophy of nonviolence.

In 1963, Lewis helped found the Student Nonviolent Coordinating Committee (SNCC), the student arm of King’s Southern Christian Leadership Conference. As president of SNCC, Lewis assisted in the planning of the August 28, 1963 March on Washington for Jobs and Freedom and was the youngest speaker at the historic event.

On March 7, 1965, Lewis and Hosea Williams led more than 500 activists as they set out from Selma for a march to Montgomery determined to raise awareness of persistent inequality at the ballot box. The marchers were met at the foot of Selma’s Edmund Pettus Bridge by sheriff’s deputies and Alabama State Troopers assemble at the order f of Gov. George C. Wallace. The armed officers assaulted the peaceful crowd with nightsticks, bullwhips and tear gas. Dozens of participants were badly injured, including Lewis who suffered a skull fracture. Photographs and footage of the violent attack, which came to be known as “Bloody Sunday,” prompted federal protection for the marchers along their path to Alabama’s Capitol and led to congressional passage of the Voting Rights Act of 1965.

Lewis continued his civil rights work after the Selma march. In 1981, he won a seat on the Atlanta City Council. In 1986, he was elected to represent Georgia’s Fifth Congressional District, a position he held until his death on July 17, 2020. During his tenure in Washington, Congressman Lewis advocated for the causes of equality, nonviolence and justice and supported Africa American history initiatives. In recognition of his lifelong commitment to civil and human rights, fellow lawmakers remembered him as the “conscience of the Congress.