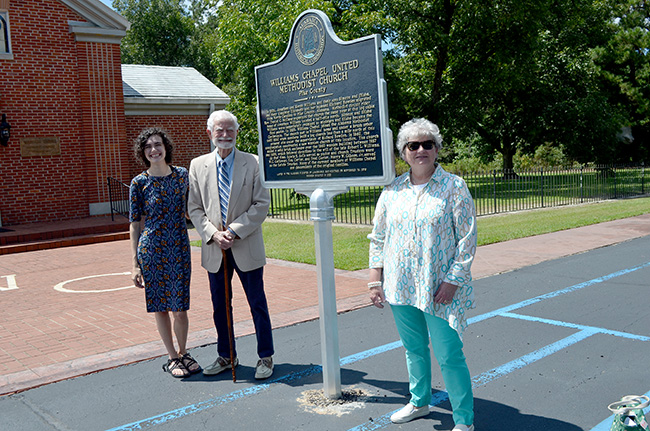 Lawrence Bowden, a fourth generation descendent of founder Jonathan Williams, who came with his wife, Sarah, and their family to Pike County in 1824, was instrumental in getting the application necessary for Williams Chapel to be listed on the Alabama Register of Landmarks and Heritage.

Bowden said Jonathan Williams was a soldier in the American Revolution. He enlisted at the age of 15. He later married and moved his family west, actually southwest, to Pike County, Alabama in 1824.  A Methodist circuit rider organized a church in the same year at the home of Jonathan Williams’ son and his wife, Simeon and Elisha. They were immediately ordained as ministers and Elisha became the first pastor.

In 1833, Williams Chapel joined the Alabama Methodist Conference. The church met in the Williams’ home and under a brush arbor until 1830 when members built a log church less than a mile north of the present church site. In 1869, the congregation constructed a new wooden church at the same location. The church added a solid brick enclosure over the 1860 wooden building between 1957 and 1959, which followed the will of the late Robert L. Williams, the

R.L. Williams, who was born in Brundidge, moved to Oklahoma where he was lawyer, judge and the third governor of the State of Oklahoma.