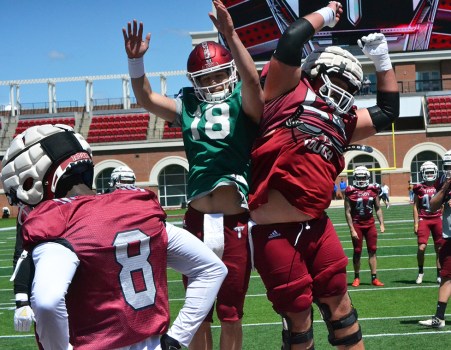 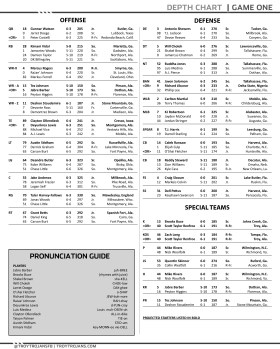 Watson competed in a quarterback competition from the spring until now and beat out Utah transfer Peter Costelli and Western Kentucky transfer Jarret Doege – along with sophomore Quayde Hawkins and freshman Tucker Kilcrease – for the starting spot.

“He has a lot of experience here at Troy and has been through a lot of situations, three quarterback competitions,” Troy coach Jon Sumrall said of Watson. “He’s been the most consistent all training camp.

“We’ll roll out with Gunnar to start the game but that doesn’t mean other guys won’t play. Gunnar has earned the opportunity to lead this team as the game one starter.”

While Sumrall said he and his coaches had already made the decision of whom the starter would be, he informed Watson and his teammates last week.

“Last week I sat down with Gunnar and all the quarterbacks one-on-one and let them know the direction we’re moving in,” Sumrall recalled. “We knew a week and a half ago really, but we wanted to make sure we were communicating it and were upfront with our players about any decision we make on the roster. We’re really excited about Gunnar and what he’s done since January until now pushing himself to get better. Gunnar has earned it, he put in the work and I think the team is behind him.”

Costelli brings ability to run the ball that no other quarterback on the Troy roster possess and when asked if he plans to use Costelli in certain packages, Sumrall was blunt.

As Sumrall mentioned, Watson has been involved in quarterback competitions in each of the last three seasons.

“It was pretty sweet,” Watson said of the moment he found out he was the starter. “I think I’ve worked for it and I was really happy when he told me.”

Turning his attention to the week one opponent, Ole Miss, Sumrall said his Trojans were excited about facing a Top 25 team to open the season.

“We’re really excited about the opportunity to be playing week one a really talented team in Ole Miss, there’s no easing into 2022 for us,” Sumrall said. “We get a Top 25 opponent right off the bat, which is exciting. It’s a great opportunity and a big challenge for us.

“It won’t be easy for us to go in there and get a win. We don’t shy away from that, I think that’s why you play the game. You want to play great teams in great environments like this and we’ll have that opportunity this Saturday in Ole Miss.”

Ole Miss is led by one of the top offensive minds in all of college football in head coach Lane Kiffin. Kiffin’s Ole Miss offense in 2021 ranked sixth in the country in total offense and Sumrall thinks the 2022 team may be even better.

“They have a really talented offense and Lane does a great job of calling plays and they have some really great playmakers,” Sumrall said. “There as explosive of an offense as you’ll see in college football. They have some new faces on (the offense) and lost a lot of production from last year but they may be improved in terms of talent.

“It starts with their tempo, they stress (your defense) with how fast they play the game. They do a really good job of play design and Lane is a really good play caller. I think he’s been a really good player caller for a long time and he’s adapted and puts you in some situations that are challenging and puts you in a bind schematically. They have really great players and even though they lost a lot they may be even more talented in terms of ability.”

“They’re good,” Wood flatly said. “They have a good scheme, they run a high-paced offense and get a lot of plays in.

“They’re an up-tempo team with a lot of really good football players coached by really good coaches. They’re a handful for sure, but we’re excited for the opportunity and our guys are working hard every day.”
Troy senior linebacker Carlton Martial also pointed to Ole Miss’ tempo as being a concern for defenses.

“They’re a tempo team, so it’s a lot about getting acclimated to the pace we’re going to have to play in this game,” Martial said. “I’m sure we’re up to it, though. You know you’ll be tired after (this game) and we want to make sure everyone’s conditioning is at a high level throughout the game.”

Troy and Ole Miss will kickoff at 3 p.m. on Saturday, Sept. 3, in a game that will be televised nationally on the SEC Network.