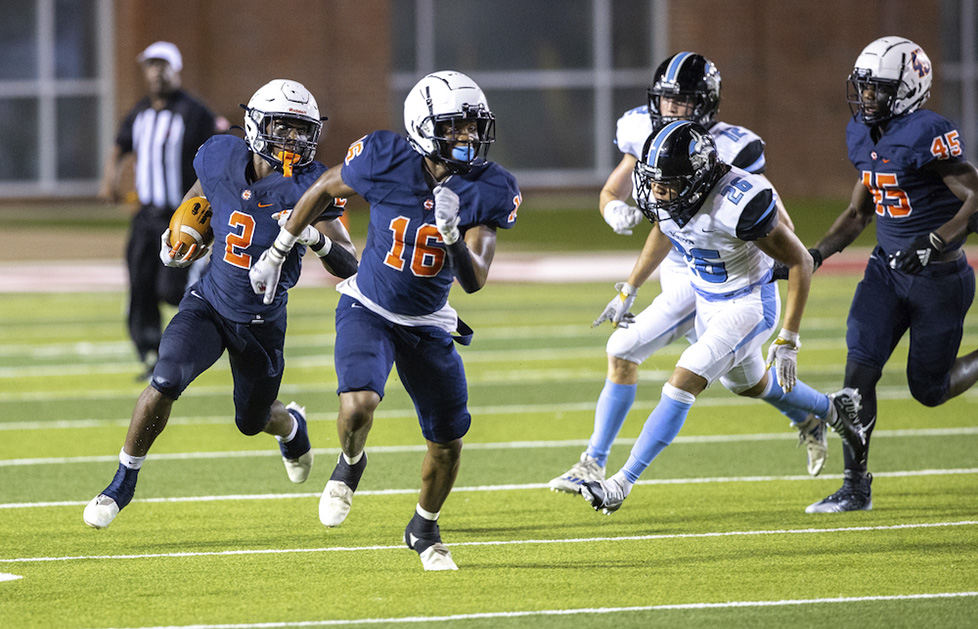 Charles Henderson High overcame a 14-3 halftime deficit with 21 second half points, including a 3-yard touchdown run by Jywon Boyd with 45 seconds left in the contest, en route to a 24-20 win over Mary Montgomery Friday night in Troy’s Veterans Memorial Stadium in the season opener for CHHS.

Improving to 1-0 on the season with the win, the Trojans got on the board to break a scoreless game to open the second quarter when Nik Peerson nailed a 26-yard field goal for a 3-0 lead with 10:13 to play in the half.

The Vikings, falling to 0-2 went up 6-3 on a 46-yard touchdown pass from Jared Hollins to Caleb Lynch, but the extra point was blocked by the Trojans.

Hollins and Lynch combined again for another touchdown with 6:33 to play in the first half for a 44-yard touchdown pass play, and Hollins ran the ball in for a two-point conversion for a 14-3 lead which was how the half ended.

CHHS junior quarterback Parker Adams found Boyd for a 52-yard touchdown pass reception with 9:02 remaining in the third quarter, the kick was wide, and the Trojans trailed 14-9.

The Vikings started at their own 20 on another deep kickoff into the end zone by Peerson, and on first down CHHS sophomore defensive end Zion Grady sacked Hollins for a 12-yard loss to the 8. A penalty moved them back to the 3, and on fourth down the punter’s knee touched the ground when he fielded the bad snap, giving the Trojans a safety, cutting the margin to 14-11.

Adams put the Trojans ahead 17-14 on their next possession following the kick by the Vikings to CHHS, when the quarterback connected with senior fullback Will Templin for a 19-yard pass reception and touchdown.

Mary Montgomery regained the lead at 20-17 with 7:28 to play in the game when Hollins ran it in for three yards and the touchdown, and the PAT was blocked by the Trojans.

On the ensuing kickoff the Trojans set up at their own 22 and marched 78 yards in 16 plays, with 15 of those being on the ground. Boyd, a junior, fought his way in from the three with 45 seconds remaining, and the extra point by Peerson was good for the 24-20 advantage.

The Trojan defense held the Vikings in the final minute to seal the victory.

Boyd finished the night to lead the Trojans with three touchdowns, 91 yards rushing – all in the second half – and 103 receiving yards for 194 total yards in unofficial stats.

CHHS is at home again next Friday when they host the Greenville Tigers in a Class 5A area matchup.