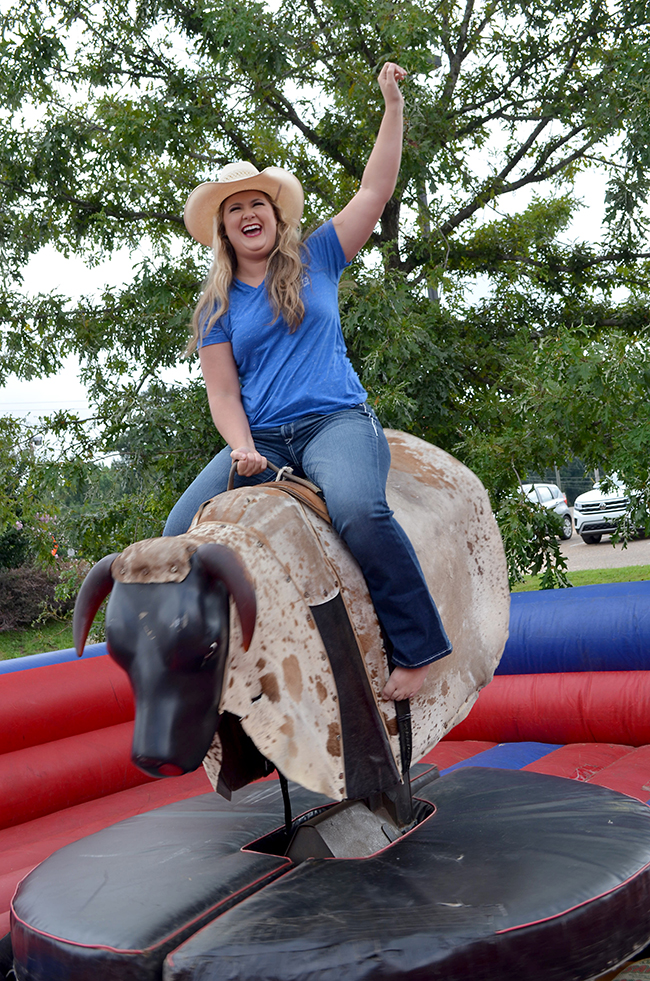 There’s no better way to get a rodeo off to a rip-roaring start, than with a bull riding competition among local greenhorn cowboys and cowgirls.

So, it was, Friday morning as a herd of Pike County VIPs waited nervously for the big bucking bull to stop pawing and snorting in anticipation of being mounted by the unsalted bunch.

The annual Mechanical Bull Ride was a preview as to what is coming at Cattlemen Park on the Pike County Cattlemen’s Annual Professional Cowboy Association Rodeo the last weekend in August.

When the action got underway, the professional cowboys and cowgirls who were set to ride and rope in the arena at Cattleman Park, would have “laughed their heads off,” emcee Ed Whatley said with a shake of his head.

The mechanical bull ride was a hee-haw kind of event for everyone except for those who rode and “bit the dust.”

The Reigning Pike County Queen of Mechanical Bull Riding Brenda Peacock was the odds-on favorite to reclaim her title. Peacock was sponsored and coached by Roger L. Rabbit, who also competed in the highly contest mechanical bull riding competition. Rabbit has little experience coaching or riding.

Emily Ledford, riding for Sisters Restaurant and, coached from the stands by Sister Pat Rogers, had a near flawless ride.

Roger L. Rabbit had a clean ride but said he does not have a competitive spirit and didn’t “carrot” too much that he was coaxed into participating,

Peacock, the reigning champion, could have been pressured by the success of Ledford’s ride, but showed the usual true grit in her ride.

Sherry Knighten rode for the Printing Press and, for a novice rider, the was impressive.

Mark Graham, who rode for the Pike County Cattlemen, was admittedly better at wrangling cows that mastering a bucking bull.

Ricky Free of Wiley Sanders was trucking right along until the bull decided to get him off its back with a wild leap and a forced hard landing.

Robbie Richburg, owner of Preston’s Restaurant, sponsor of the mechanical bull riding event, was the last to ride and probably would have mounted longer had customers not been waiting.

When the dust had settled, the riders with the three times longest rides were congratulated.

Emily Ledford of Sisters took first place honors with Ricky Free of Sanders in second place and Sherry Knighten with The Printing Press in third place.

B.B. Palmer organizer of the annual mechanical bull ride, congratulated all of the riders and Ed Whatley who was masterful emcee.

“The mechanical bull ride is always a friendly competition with a fun-loving galley,” Palmer said. “It was great way to kick off the Pike County Cattlemen’s weekend rodeo. We are looking for a great crowd both nights and a great fun Saturday afternoon with the kids at the Western Festival. The gates open at 4 p.m. and the Western Festival will get underway at 5 p.m. The Saturday night rodeo will begin at 7:30 p.m.