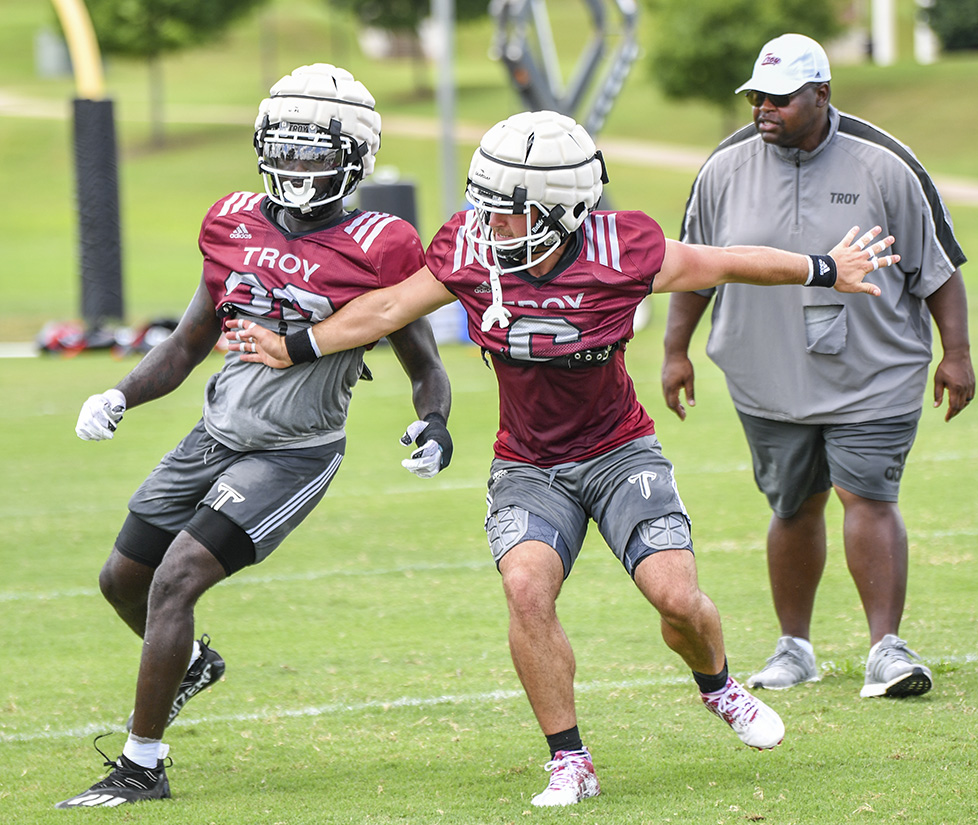 Kyle Coale (6) is working at defensive back during fall camp. (Photo courtesy of Troy University Athletics)

Longtime Troy University punter Kyle Coale has been practicing this fall not just as a specialist but also as a defensive back making him one of the more unique cases on the Trojan roster.

Troy’s roster officially lists Coale as an “athlete” this season and the California native made the move as a necessity. 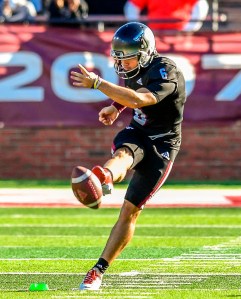 Kyle Coale (6) has been a punter and kickoff specialist at Troy. (Photo courtesy of Troy University Athletics)

“Kyle Coale has value that he brings to our team bigger than the position he plays,” Troy coach Jon Sumrall said. “He’s been a specialist here but in training camp you have to limit your roster spots and for him to get into training camp we weren’t going to be able to bring him as a specialist because of the numbers you’re allowed.

Coale’s move to defense may not be as much of a surprise as expected due to his competitive nature. Coale went from competing primarily against specialists in Troy’s offseason workout competition, “The Gauntlet,” but managed to talk his way into competing against All-Sun Belt defenders like Richard Jibunor and Carlton Martial.

“That’s been years in the making,” Coale said of moving to defense. “I compete with these guys every single day and it started off when we do our winter workouts in ‘The Gauntlet.’

“I convinced the strength coaches to give me a go at competing against guys like Richard Jibunor, Carlton, KJ (Robertson) and those guys instead of competing with just the specialists.”

“The Gauntlet” was the only way Coale felt he could compete against his teammates and form a bond before his move to defense.

“As a kicker that was the only way I could really compete with other players on the team,” he continued. “A lot of times as kickers we’re over on the side by ourselves. My mindset was, I was just trying to be more of a part of the team and grow more of a relationship with the guys on the team.”

Coale said he didn’t bat an eye when Sumrall asked him about moving to defense.

“It’s my last year and I came in thinking I would be kicking but I feel like I’m athletic enough I can compete with some of these guys out here,” Coale said. “They’ve been really good helping me learn the playbook and everything like that. I’m having a blast out there.”

Sumrall explained that Coale’s character has being something that was invaluable to the team. 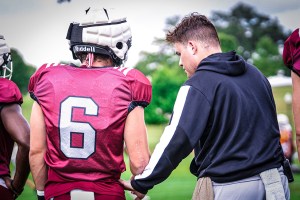 “He’s the kind of guy that brings so much value to your team because of his character and work ethic and what he’s all about. He’s a great teammate,” Sumrall emphasized.

Coale has even made some plays during practices in his new position, including earning interceptions in 7-on-7 drills.

“My dream of playing actual college football as a kid – not just as a kicker – is coming true right now,” Coale said. “I’m having a good time and I think the guys like having me out here.”

Coale’s move to defense comes despite having little to no experience at other positions at any level.

“I didn’t play a down of football (at another position) in high school,” said Coale. “My freshman year I played one snap at kick returner and I got hit on that and I was like, ‘I’m not doing that again.’ This has been my first time playing an actual position my entire life, so it’s fun.”