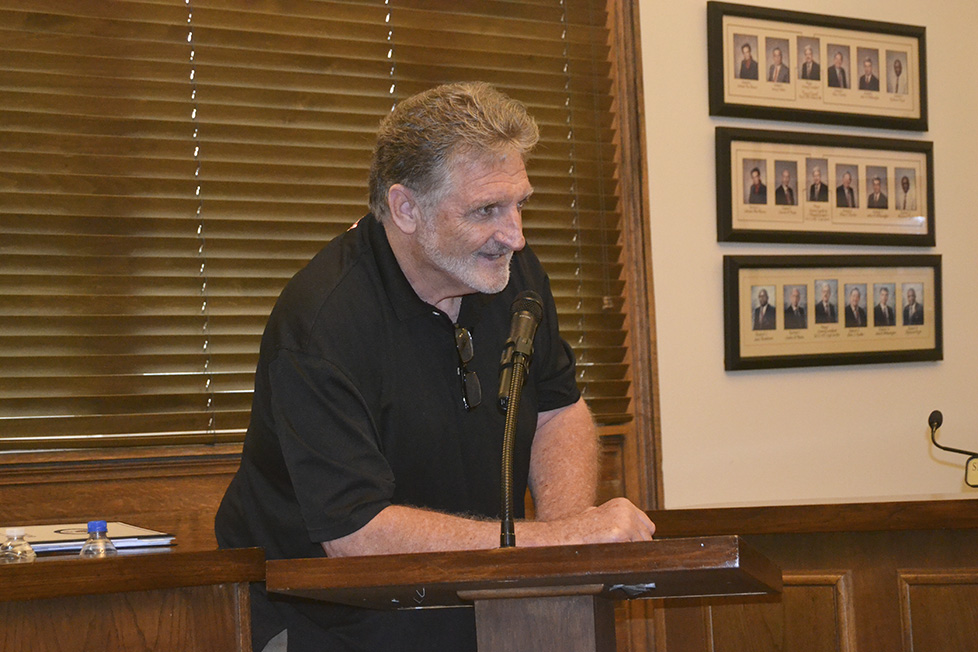 Bob Baumhower will be bringing his Baumhower’s Victory Grille to Troy in 2024. (Photo by Josh Boutwell)

At the Aug. 23 Troy City Council Meeting, the council approved a resolution to enter into a project development agreement for the construction of a Baumhower’s Victory Grille in the city.

The project is more than a year in the making and initially came to a stall due to the original developer pulling out. The entire project is an expected $4.6 million capital investment on the part of Baumhower’s of Troy.

The resolution the council approved enters the city into an agreement with Baumhower’s of Troy and Nowlin Development, which will see the city reimburse the development up to $127,000 for the construction of a public access road connecting the highway to the property, the land the project will be constructed on and construction of sewer and water lines.

Additionally, the city will reimburse Baumhower’s of Troy 1.5 percent of sales tax generated by the property for the next 15 years, based on an expected $4.5 million in projected sales per year. The amount that the city will reimburse Baumhower’s for sales tax is capped at $67,500 per year but is based on the amount of actual sales generated by the restaurant for anything under that amount. Meaning if the restaurant generates sales less than $4.5 million per year, the amount in sales tax rebates the property will receive lessens.

“When you talk about a $4.6 million capital investment (by Baumhower’s) and an expectation of $4.5 million in sales, that’s big,” Troy Mayor Jason Reeves said. “It’s about getting people to stop in Troy. We’ve got a Division I university and a four-lane U.S. Highway here, so there is a lot of cars that come through here.

“Having a restaurant with the reputation of Baumhower’s is a part of getting people to stop when they come through Troy.”

“We will be by far the smallest market they’ve ever come to, so I think that’s a huge vote of confidence for our community, our university and the traffic that comes through (Highway) 231,” Reeves said. “We believe this will help our entire area and will add on to a lot of the growth we’ve seen and that’s what we’re hopeful for. We believe a rising tide floats all boats. This is an opportunity to get people to stop in Troy, look at Troy and come to Troy and makes us more of a regional destination.”

Baumhower’s youngest son attends Troy University, which was part of what made the former NFL star think about coming to the city.

“I was coming up to see my son and when I was here he was bragging on Troy and Troy University and we ended up getting a little place up the road,” Baumhower said. “I want you all to know we don’t take all of your hard work for granted, we appreciate it. We’re going to work really, really hard to get a bunch of these folks going up and down that highway to stop and get some of that sales tax revenue back into your pockets.”