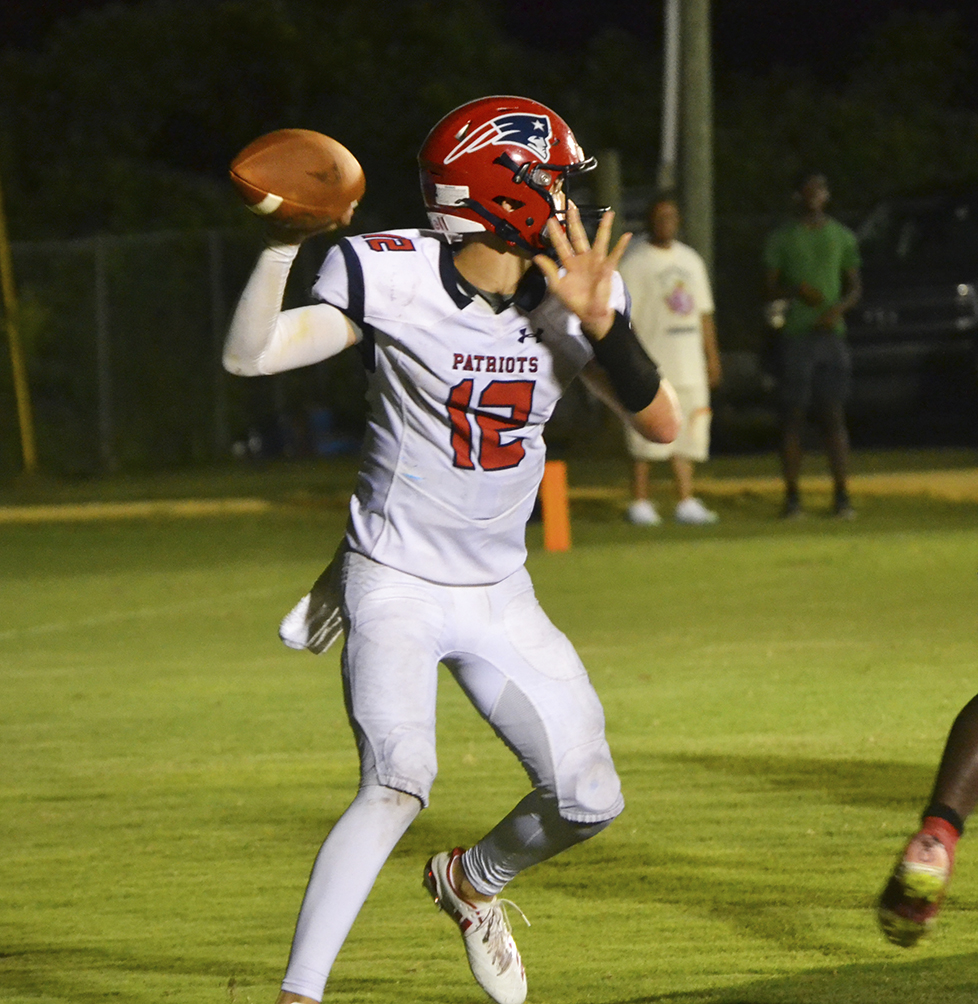 Dawson Bradford (12) and the Patriots will host Bayside Academy this Friday. (Photo by Josh Boutwell)

Like many of Pike’s games this season, the Bayside game will be a historic one for the program as it’s the first home game as a part of the Alabama High School Athletic Association (AHSAA). It’s also the first time that Bayside and Pike have ever played one another.

Bayside’s football program is only 21 years old, having started in 2001, but has been very successful in the past eight years. The Admirals have earned playoff appearances in each of the last three seasons in Class 3A and are coming off a 9-3 season in 2021.
Bayside is entering Class 4A for the first time this season and kicked it off with a 14-13 win over Class 5A’s Elberta last week. Bayside managed to pick up the win after stopping an Elberta two-point conversion attempt with just under two minutes left. Freshman running back Damien Tate leads Bayside’s rushing attack.

“Bayside is a pretty good football team,” Pike coach Travis Baxley said. “They are coming off a 14-13 win over Elberta last week and they looked like a disciplined and tough football team.

“They do some things offensively that will be problematic. There is some ‘Wing T’ (offense) sprinkled in there, which is always an issue to defend. We expect to see a really good football team coming in here Friday night.”

Pike is coming off its frustrating season opening loss to Mobile Christian last week in which the Patriots were forced to play with a pair of eighth graders on the offensive line.

“We handled it with toughness and class and I am proud, not just of the effort but our execution in some spots,” Baxley said. “I’m extremely proud of this group and their unflinching spirit. I want to see us clean up the mistakes we made from last week and I want to see more attention to detail and better execution, as well.”

After a long road trip to the Mobile area, the Patriots will be happy to be at home for the first time this season.

“It’s a heck of a road trip to Mobile,” said Baxley. “Those three hour road trips always take something out of you. We’re excited to be home and excited for the home crowd.

“We know this place will be packed out supporting our kids and I expect that to translate into a better on-field product.”

Pike and Bayside will kickoff at 7 p.m. at Delaney Kervin Stadium in Troy.