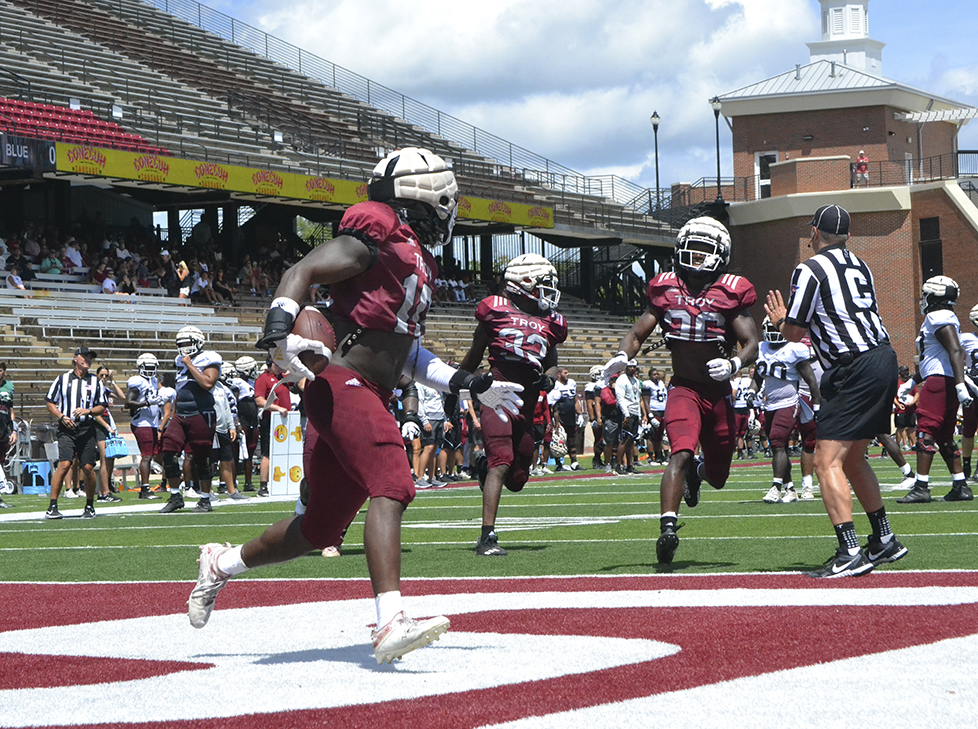 Like the last Troy scrimmage, both the offense and defense shined at different moments. Troy’s No. 1 offense scored touchdowns in two-minute drill situations and linebacker Jayden McDonald recovered two fumbles, one of which he returned for a touchdown.

“Once we put the ball in the middle of the field and did some two-minute and overtime type situations we were able to put the ball in the end-zone and the offense did some good things,” Troy coach Jon Sumrall said. “We still have a lot to clean up. There are some things I’m really, really frustrated about today that weren’t good enough. We have to do a better job of getting the snap between the center and quarterback.”

Speaking of quarterbacks, Western Kentucky transfer Jarret Doege made his first appearance in a scrimmage, while Gunnar Watson worked exclusively with the No. 1 offense and Peter Costelli worked with the No. 2 offense.

“I think all of those guys did some good things,” Sumrall said. “I think Gunnar has a good grasp right now of what we’re trying to do, so you can tell he’s (received) a lot of reps in what we’re doing.

“It’s still a lot of new stuff for Peter but he’s still making strides. I think you could see when Jarret got in there and got his shot he’s very natural and has played a lot of football and it shows. There’s not a whole lot he’s going to see across the line of scrimmage that he’s not seen before. There’s some guys I don’t want to get lost in the top end of this quarterback discussion, though. Tucker Kilcrease is going to be a really good football player and once Quayde Hawkins gets fully healthy I think he has a chance to be a really good player, too. We have good quarterbacks in that room but it’s just a matter of who gives us the best chance to win right now.”

While Sumrall said he may not announce publicly who the starting quarterback will be, the decision will be made this coming week as Troy begins to prepare for Ole Miss.

“We’ll ease into that this week probably but I don’t now if I’ll announce that publicly,” Sumrall said. “I have a pretty good idea of where I’m headed with that and I don’t think that’s very hard to figure out.”

Doege said he made his decision to enter the transfer portal after Western Kentucky coaches selected another player as the team’s starting quarterback.

“They went with a different guy but I felt like I put too much into the game to sit there and not play,” he said. “I know that coming here wasn’t really the most ideal situation either but I’m going to make the best of it and see what I can do for this team and try to make them better and try to learn the playbook as fast as I can to maybe give myself an opportunity down the road.”

Both offensive coordinator Joe Craddock and Doege said that he’s been coming into the football facility early and staying late trying to get caught up.

“It’s a really complex (offense),” said Doege. “I’m used to the ‘Air Raid’ style, really easy plays to learn, so it’s going to take me a while to learn the offense. I’m staying here late and meeting with Coach Craddock trying to get it down. I think it will allow me to learn faster if I ever make it to the next level, too.”

Doege has been impressed with the way his new teammates have embraced him. 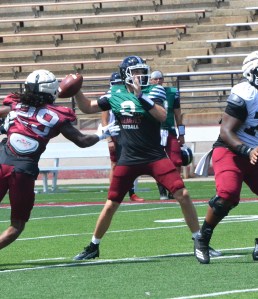 “They’ve been great at accepting me. There’s already good chemistry on this football team and they’re some great guys,” Doege said. “I’ve had no issues making friends and my next step is to create great relationships with these guys. It’s hard because it’s so late but I think over time we’ll create relationships with each other on and off the field.”

Another recent change to Troy’s roster is the move of South Carolina transfer Eric Shaw from receiver to “bandit” on defense.

“Early in training camp he was playing receiver but we would put him in for one-on-one pass rush some and it just looked like his best chance to get on the field this year was more than likely at bandit,” said Sumrall. “He has ideal length and athleticism to play that position and I think he may have found a home there because he definitely flashes a little bit when he gets in there. I think he has a really high ceiling for development.”

Troy will now turn its attention to Ole Miss, beginning on Monday. 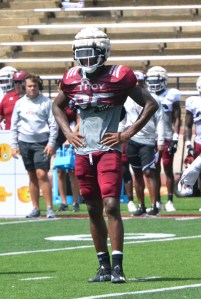 Eric Shaw has moved from receiver to bandit. (Photo by Josh Boutwell)

“We have to switch gears now,” Craddock said. “Some of the things we’ve seen on defense (during fall camp) is going to be completely different the next two weeks as we prepare for Ole Miss.

“We’ve been studying those guys all summer and we have a pretty good idea of what we’re going to do, but it’s tough to know because they have a new coordinator and new transfers. We’ll put the best plan together we can.”

Sumrall talked about how big of an opportunity the Ole Miss game is for his team but also emphasized the importance of cleaning up some of the mistakes before week one gets here.

“It’s why you play the game,” Sumrall emphasized. “We get to go play in a great environment against a really high quality opponent, a ranked opponent, and a team that has won a lot of games the last couple of years.

“We have our work cut out for us but we’re excited for the opportunity. We won’t beat anyone unless we don’t beat ourselves and take care of the things on our side of the ball and not worrying about them as much, though.”