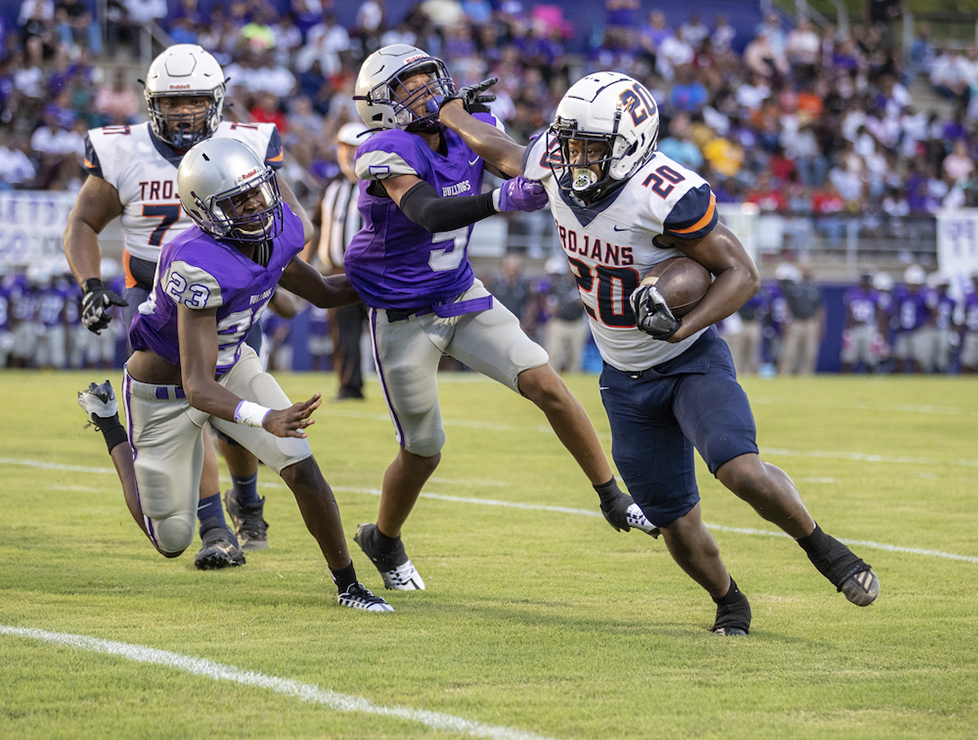 Bulldog Stadium in Brundidge returned to life Friday night when a capacity, standing-room only crowd watched two teams heading in strong directions stand toe-to-toe in a pre-season jamboree contest, with Charles Henderson High coming away with a 35-14 win over the Pike County High Bulldogs.

Entering his second season as head coach of CHHS, Quinn Hambrite led his team to a 21-8 halftime lead, while first-year head coach Mark Hurt of PCHS dressed out over 80 players in a show that the future for the Bulldogs is strong and heading in the right direction.

Coach Hambrite of CHHS was pleased with the overall performance, but knows his team needs to clean up some areas of play, including special teams.

“I was real pleased with our effort, they worked real hard,” said Coach Hambrite. “I’m proud of them and it was a good win for us. We have to really learn that special teams is a vital part of the game. It is more important than offense and defense.”

The Trojans got on the board on their first possession when junior quarterback Parker Adams threw to Jywon Body for a 4-yard TD pass play to cap a 36-yard scoring drive, and a 7-0 lead on the extra point by Nik Peerson.

The Bulldogs responded with a 94-yard kickoff return for the score when Ian Foster raced through the CHHS kickoff coverage squad, and quarterback Omari Barrow connected with Zay Carlile for a two-point conversion and an 8-6 lead in the first quarter.

CHHS got on the board again on their next series, set up by a 56-yard kickoff return by Boyd to the PCHS 29, and seven plays later Antonio Frazier bulled in from 1-yard out for the TD, and Peerson added the extra point to make it 14-8.

To open the second quarter, the Trojans started on their own 48 and Zach Coleman took it in seven plays later for a touchdown on a 1-yard carry for a 21-8 advantage.

PCHS drove to the CHHS 1-yard line late in the second quarter, but the CHHS defense held strong and the Bulldogs were unable to score on the goal-line stand by the Trojans.

In the fourth quarter CHHS started at the PCHS 42 and Frazier ended the drive on a 12-yard TD run to put the Trojans ahead 28-8 following the Peerson PAT.

PCHS was driving late in the fourth quarter but a fumble was recovered by Quay Grimes who scooped it up and ran it 88 yards for a touchdown and a 35-8 with 5:10 to play in the game.

The Bulldogs took the ensuing kickoff and Foster took the kickoff at his own 6 and took it 94 yards for a touchdown for what would be the 35-14 final.

Coach Hambrite of CHHS was impressed with the Bulldogs under Coach Hurt, and the direction that program is heading.

“PCHS has some guys back and they are going to do a good job this season,” said Coach

CHHS was led in rushing by Coleman with 55 yards, while quarterback Adams completed 12 of 16 passes for 99 total yards and one TD, in unofficial stats. Foster had both of Pike County’s big plays.

Coach Hurt saw progress in his program and was impressed with the visiting Trojans.