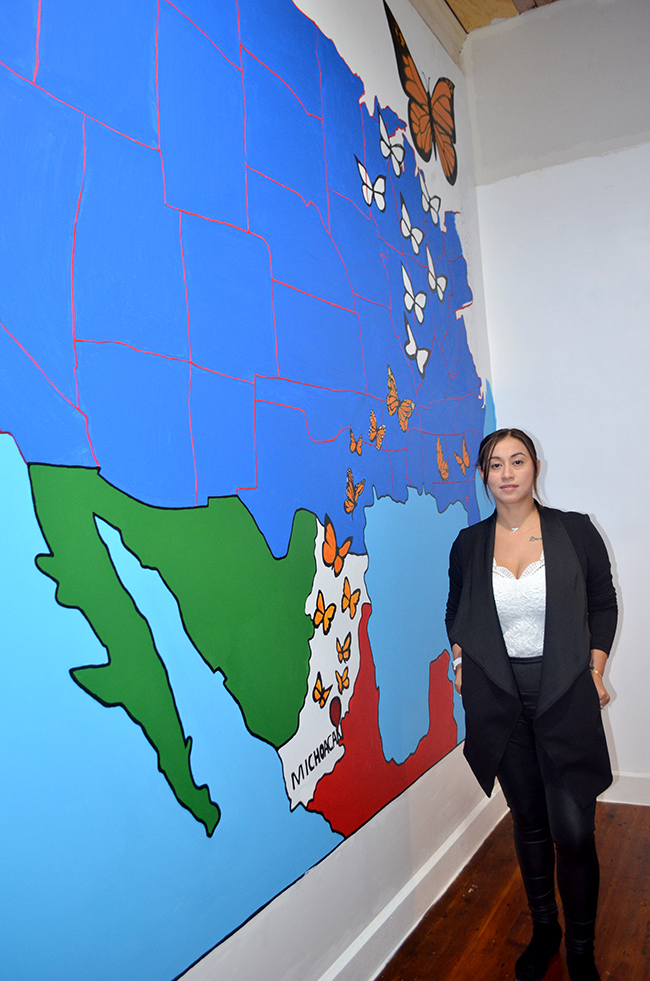 Jaine Treadwell | The Messenger Alejandra Esquivel had the idea of painting a mural that would brighten the kitchen area. She painted a mural with the migration route off the monarch butterfly, from which the restaurant gets its name.

When Alejandra Esquivel’s husband, Martin Esquivel, was in the process of opening a Monarcas Mexican Restaurant in Brundidge, she wanted to make a contribution to the new location.

“I wasn’t needed in the kitchen,” Alejandra said, with a smile. However, she had the idea of painting a mural that would brighten the kitchen area.

Monarca means monarch. So, Alejandra thought a mural tracing the migration of millions of monarch butterflies leaving Mexico in the summer for the United States and Canada, a journey of over 3,000 miles, would be a meaningful addition to the Monarcas Mexican Restaurant.

“It brightens the kitchen area and it has meaning,” Alejandra said.

The mural, although, not immediately visible from the dining area could spur interest in the plight of the monarch butterfly.

The iconic monarch butterfly can be found across almost all of North America but it faces threats from habitat destruction to climate change.

The monarch butterflies have officially been listed as an endangered species by the International Union of Conservation of Nature and are now on the brink of extinction.

Their numbers are down 90 percent of what they were in 1992. And the milkweed plant population, which is indispensable to the monarch, is also down 90 percent.

Milkweed plants are the only source of food for the monarch caterpillar. But these plants are rapidly disappearing due to the loss of habitat stemming from land development and the widespread spaying of weed killer on the field where they live.

Perhaps, Alejandra Esquivel’s mural will brighten the kitchen and bring light to the plight of the monarch butterfly.