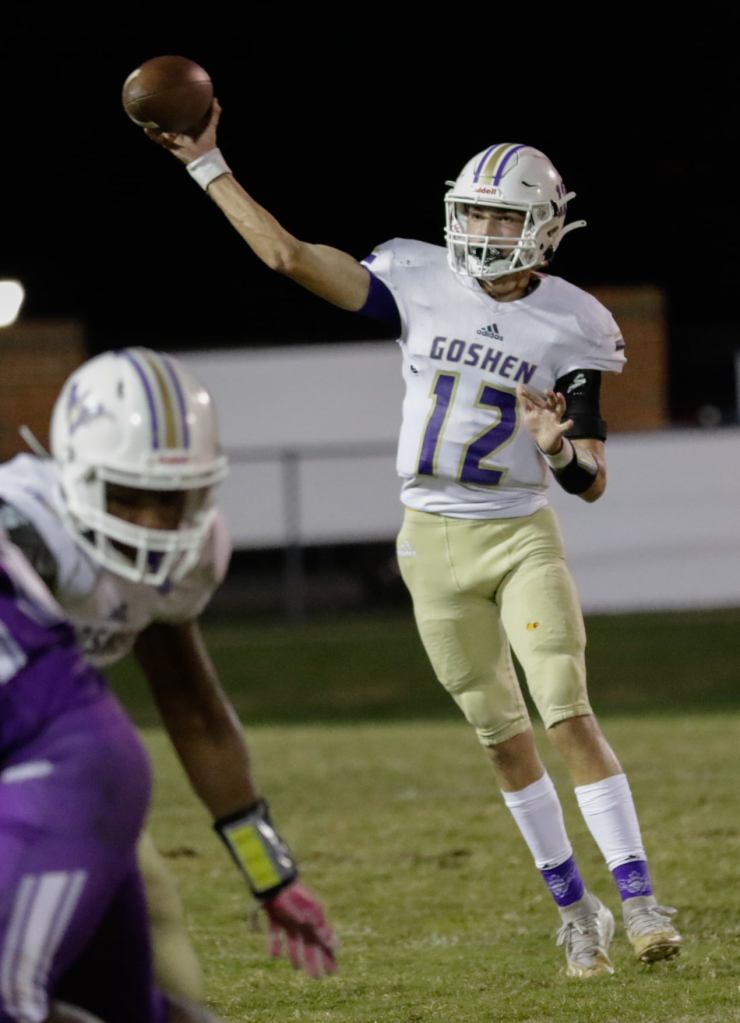 Goshen quarterback Peyton Stamey (12) and the Eagles will host Daleville this Friday. (Photo by Dan Smith)

The Goshen Eagles will open the 2022 football season this Friday, Aug. 19, at home against Class 3A’s Daleville Warhawks.

“They have a really good quarterback, a good running back and a big offensive line,” Goshen coach Don Moore said of Daleville. “I don’t really have much on them, I know they have a new offensive coordinator since the spring game and I think they’re going to be changing up some things on offense.

“I feel like they’ll do some zone-read stuff with that quarterback and running back they have. They’re quarterback is very elusive.” 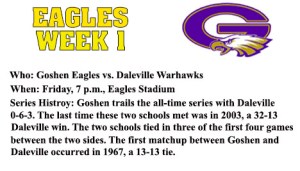 Daleville quarterback Omarion Pinckney completed 32-of-95 passes for 509 yards and four touchdowns with two interceptions but also rushed for 924 yards and eight touchdowns as a freshman last season. Daleville also boasts newcomer Anthony Wynn, who has transferred in at running back from Enterprise. Daleville also returns 6-foot-4-inch, 285-pound senior Jeremiah Moore at fullback/defensive end. Moore missed much of the 2021 season.

“Our numbers are up, we’re still young but we’re not as young in experience this season,” Daleville coach Will Garner said. “All of our guys went through the fire last year and we bring back nine starters on offense and nine starters on defense. Things are looking better but we don’t know how much better until we strap it up and play someone else.”

“We started out kind of slow and sluggish with it being the second week of fall camp, the kids didn’t really have (a game) to look forward to yet and it was just practice, practice, practice,” Moore said. “We had to kind of test them a little bit with the intensity and by the end of the week they really picked it up.”

Garner said he knows what to expect from the Eagles this week.

“I expect to see a good football team,” Garner said of Goshen. “I’ve known Coach Moore for awhile and he’s a really good football coach. He’s going to have those guys coached up and ready to play. I know they have a few more guys out from last year, so I expect we’ll see a well-coached, physical football team.”

That physicality is something Moore is looking for from his team.

Goshen and Daleville kickoff at 7 p.m. on Friday in Goshen.