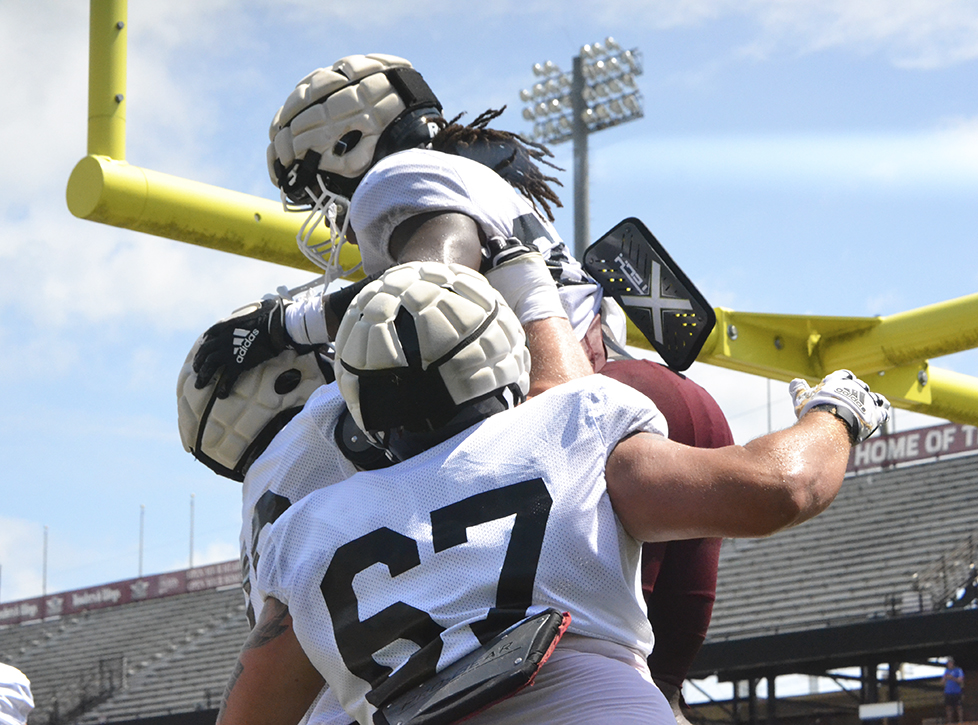 Troy running back Damien Taylor celebrates a touchdown with his offensive linemen during Saturday's scrimmage. (Photo by Josh Boutwell)

On Saturday morning, the Troy Trojans football team took to Veterans Memorial Stadium for the first scrimmage of fall practices.

During the 100-play scrimmage, the offense and defense slugged it out back-and-forth. The two sides battled in game-like situations, as well as working on red-zone offense/defense and special teams. While the defense dominated the early portions of the scrimmage, Quarterbacks Gunnar Watson, Peter Costelli and Tucker Kilcrease all led scoring drives during the day, especially during red-zone competition, as the offense picked things up.

“Out of all the scrimmages we’ve had since getting here, this was the best back-and-forth on both sides of the ball,” Troy coach Jon Sumrall said. “I thought the defense really came out and controlled the opening part of the scrimmage and we made some stops. As we moved the ball and the offense put the ball in the red-zone, they did a good job capitalizing on that and punching it in (for touchdowns) some.

“There were really positives on both sides. We left a couple of scrimmages in the spring and felt like the defense dominated the day but I thought there was some really good give and take on both sides today. A lot of positives and still a lot to clean up. I thought the kicking game was really nice to see, Scott Taylor Renfroe and Brooks Buce and all those guys banged it through on some field goals.”

Renfroe drilled 37-yard, 48-yard and 49-yard field goals during the day. Buce also converted multiple field goal attempts. While the quarterbacks have received all of the attention in regards to position battles, the competition between Renfroe and Buce has been a hot one in the fall.

“Brooks was unable to participate most of the spring with a lingering hip deal but he’s still a proven veteran player that has had a lot of success,” Sumrall said. “Scott Taylor Renfroe is probably our most improved guy in the special teams room from January until right now, without a question.

“Specialist wise, he’s the guy that has made the biggest jump, especially on field goals. He’s gotten better on kickoffs but his field goals have improved a ton.”

Watson was pleased with what he saw from the offense and special teams in the first scrimmage.

“I thought we started off a little slow but we got back up and I think around the third drive we had a really good drive, the line was moving really well and we had a guy just walk in for a touchdown,” he said. “On the kicking side, Scott hit a bunch of field goals, some long ones and short ones, he hit everything today. Brooks had a good day, too.”

Troy native Renfroe – a Pike Liberal Arts graduate – said that he made a concerted effort during the offseason to improve his game.

“I met with some of my kicking coaches and that really helped me out, they’ve given me some good help,” Renfroe said. “I had a meeting with (strength and conditioning coach Rusty) Witt and Coach Sumrall in the spring and they told me some things I needed to work on and one of those was that I need to get stronger and my desire to be great.

“That was one thing I really worked on in the summer. I set my goals and I did every single thing, every single day, to try and meet those goals, so that I have no regrets.”

Troy’s running backs all made plays during the scrimmage, as well. Kiminal Vidal, Damien Taylor and DK Billingsley all scored rushing touchdowns, while Charles Strong and Jamontez Woods also had big runs during the scrimmage. All eyes still remain on the quarterbacks, though, as they compete for the starting job going into week one.

“Some of it is decision making at the line of scrimmage, some of it is post snap stuff, but there was some good and bad for each guy,” Sumrall said of his quarterbacks. “All are doing good things, each guy in the mix has different strengths. It’s about how do you minimize what your weakness is?

“I thought all three of them had positive moments today. I think we’ll know where we’re headed in about a week. I’m not going to rush to make a fast, sloppy decision. We’ll be very thorough and detailed and evaluate all the way through next Saturday before we probably make a decision there.”

While Quayde Hawkins is still hobbled with an ankle injury, the other quarterbacks are still all in competition currently. Watson spent the majority of the scrimmage with the No. 1 offense and both Costelli and Kilcrease got reps with the No. 2 and No. 3 offenses. Sumrall, who has been high on Kilcrease since his arrival, said that people shouldn’t count the Brantley gunslinger out in the competition either.

“Everyone wants to talk about Gunnar and Peter but watch out for Tucker Kilcrease,” Sumrall emphasized. “I’m not saying his time is now, I don’t know yet, but he’s going to be a good player and I’m glad he’s on our team. He’s got something about him. All of those guys are still competing and it’s not over yet.”

Costelli pointed to tempo as being something the offense has to get better at moving forward.

“I thought it went good, I thought we had some good plays and we always have things to work on, especially with the tempo going from the huddle to getting the play off,” he said. “Overall, I thought we looked good.”

Sumrall said that it’s unquestionably how much improvement the offense line has made this fall.

“It’s night and day from the spring,” he flatly said. “When you aren’t very good in the spring it’s not very hard to look better, at least some by slight improvements, but they’re playing with better consistency and they’re playing the game with a better attitude and mindset.

“They’re all more physical and just more dialed in with the details they’re doing, and I think we’ve upgraded the room by making some personnel changes. We added three guys in that room from the transfer market that may play this year. That room is much improved. It’s not arrived yet, still a long way to go to where we want to be, but I’m confident we’re headed in the right direction.”

Senior linebacker Carlton Martial also sees the improvement in the offense he battles every day.

“They’ve taken a huge leap forward through this whole fall camp,” Martial emphasized. “They’re more competitive, those guys bring the energy every day and we know Gunnar is going to step up and be the leader that we need him to be.”

With Troy boasting one of the top returning defenses in the Sun Belt, Trojan center Jake Andrews said the offense is motivated to match the defense’s success, and a meeting between the offensive players has set the tone in camp.

“Our first few days we were good and then slowed down into a little lull,” said Andrews. “Halfway through we had a little offense only meeting and got into everybody and let them know what we’ve done in the past is not what we’re going to do now.

“We’re just really focused on changing, changing the culture, changing the game around here, especially on offense. We have a super stellar defense and everyone talks about them, but we want them to talk about the offense just as much as they talk about (the defense). That’s really our goal.”

Troy is back on the practice field on Monday and will hold the annual Fan Day Scrimmage at 11 a.m. next Saturday, Aug. 20, at Veterans Memorial Stadium. Fan Day will be open to the public and there will be food and free posters signed by the players available to fans.