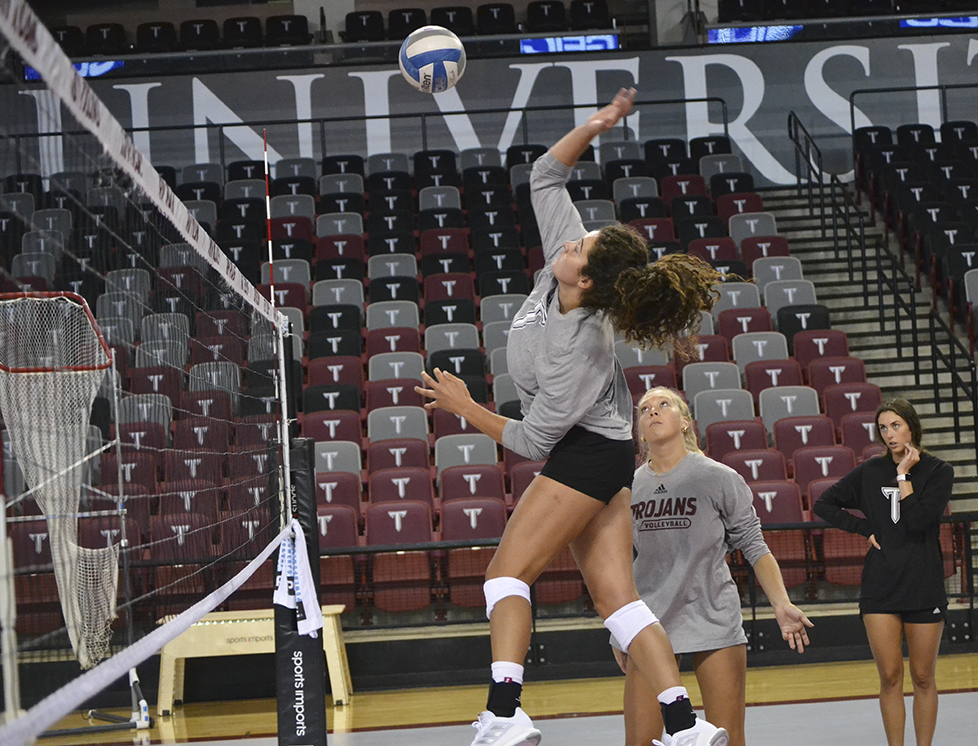 Troy junior Julia Brooks is one of the top returning players in the Sun Belt in 2022. (Photo by Josh Boutwell)

Earning a third consecutive winning season is a feat that hasn’t been accomplished by the Troy volleyball program since the 1990s and Troy is also coming off its second NIVC Tournament appearance in the last three years, as well.

Troy started fall practices this week and while volleyball is the only fall sport that the NCAA doesn’t allow summer team activities, Lauer was impressed with how his team worked out on their own.

“Our players are here in the summer and in the weight room and they were getting in the gym on their own and they did a really great job with that. I’m super proud of them,” Lauer said. “We’re just getting back from summer break to practices and it’s been good to knock some of the rust off and get back to work. The girls are working really hard.” 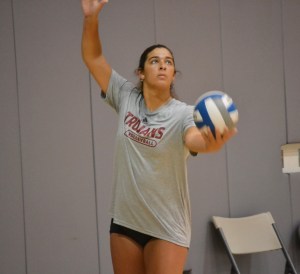 Middle hitter Jessica Lopresti and the Trojan volleyball team will welcome Samford to Trojan Arena next Monday for an exhibition game. (Photos by Josh Boutwell)

Troy returns a number of veteran players to the 2021 team including junior middle hitter Julia Brooks, senior setter Amara Anderson and senior right side hitter Halston Hillier. Brooks earned first-team All-Sun Belt honors in 2021 and was the only player in the Sun Belt to rank Top 10 in all statistical categories. She earned 353 kills and 27 solo blocks on the season. Anderson also earned second-team All-Sun Belt in 2021 and recorded 1,166 assists, which was her third straight season with over 1,000 assists. Hillier also earned 149 kills last season and sophomore Tori Hester also totaled 189 kills in 2021.

“I think our team has always been built on being aggressive offensively and keeping our big attackers involved, so Julia Brooks is a big part of our firepower,” Lauer said. “Tori Hester I think is going to have a breakout season, as well. We’re fortunate to have Amara Anderson back for a fifth year, she’s super experienced and one of the most talented setters in the conference.

“Halston Hillier also came back for her fifth year, so we have some really key spots that we have veteran experience at. We’ll build off that and fill in some new pieces, as well.”

There are also some new names that Troy fans will get used to hearing this season.

“(Junior) Ashley Guenveur is healthy this year, so that is exciting for her and the team,” Lauer said. “We also have some really talented freshmen. (Freshman Amiah) Butler will surprise some people and some others will find ways to contribute in different ways.”

“They’ve been great. We have six new freshmen and they’re all energetic,” Brooks said of her new teammates. “It’s nice to see the spark in their eyes as their getting their first experience in college volleyball. They’re competitive and being aggressive, which is great.” 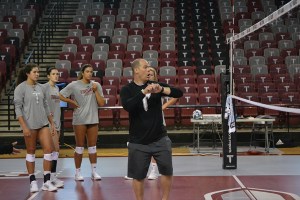 Troy coach Josh Lauer is entering his sixth year with the team and is looking to continue on the program’s recent success. (Photo by Josh Boutwell)

Troy’s schedule this season is a daunting one. Troy will start the first three weeks of the regular season on the road, with much of that in SEC Country. The Trojans have games against Georgia, LSU, Penn State, Iowa State, Auburn and others during three tournament appearances before the home schedule finally begins on Sept. 15.

“We have a really challenging schedule this year, so we’re concentrated on keeping our heads on straight and focusing on the goal and the reason the schedule was built this way,” Lauer said. “We want to be the best team we can be come November. These first three weeks are to help build up our armor and prepare us to compete with the top of our conference when it comes time for the Sun Belt Tournament.”

The Sun Belt, which is already one of the top volleyball conferences in the Group of Five, only gets tougher this season with additions of James Madison, Southern Miss, Old Dominion and Marshall.

“We didn’t add slouches, that’s for sure,” Lauer said of the new Sun Belt teams. “Volleyball is really, really strong in the Sun Belt and I know that in our region sometimes volleyball is a sport that people don’t even know what season we play in but our conference is very strong.

“We have to get battle tested and for us to do that we have to go on the road and play big time schools. You don’t get opportunities for big wins unless you challenge yourself and take some risks.”

It didn’t take Brooks long to say what Troy’s main goal is this season when asked.

“We definitely want to win a championship in our conference, that’s one of our big goals,” Brooks emphasized. “We just need to be consistent all the way through the season and try not to roller-coaster in games and just be consistent no matter who we play.”

Lauer echoed his player’s sentiments on the ultimate goal for 2022.

“I think our goal this year is to compete for the conference championship once we get to the tournament,” he said. “Texas State has eliminated us the last three years in a row, they’re a great team, so we know where we need to be to win the Sun Belt.

“You have to be a Top 50 team in the country to win the conference. It’s very akin to what’s going on in softball, baseball, basketball and football in the Sun Belt. Volleyball (in the Sun Belt) is competing at a very high level on the national stage. That’s exciting and fun but it’s a challenge, there is no doubt about that.”

Troy will get the season started with a preseason exhibition game at home on Monday, Aug. 15, at 2 p.m. in Trojan Arena against Samford. Troy’s regular season home schedule begins on Thursday, Sept. 15, with the Trojan Invitational. Troy will welcome Alabama State, Gardner-Webb and Jacksonville into Trojan Arena over that weekend. All admission to Troy volleyball games is free this season, as well.