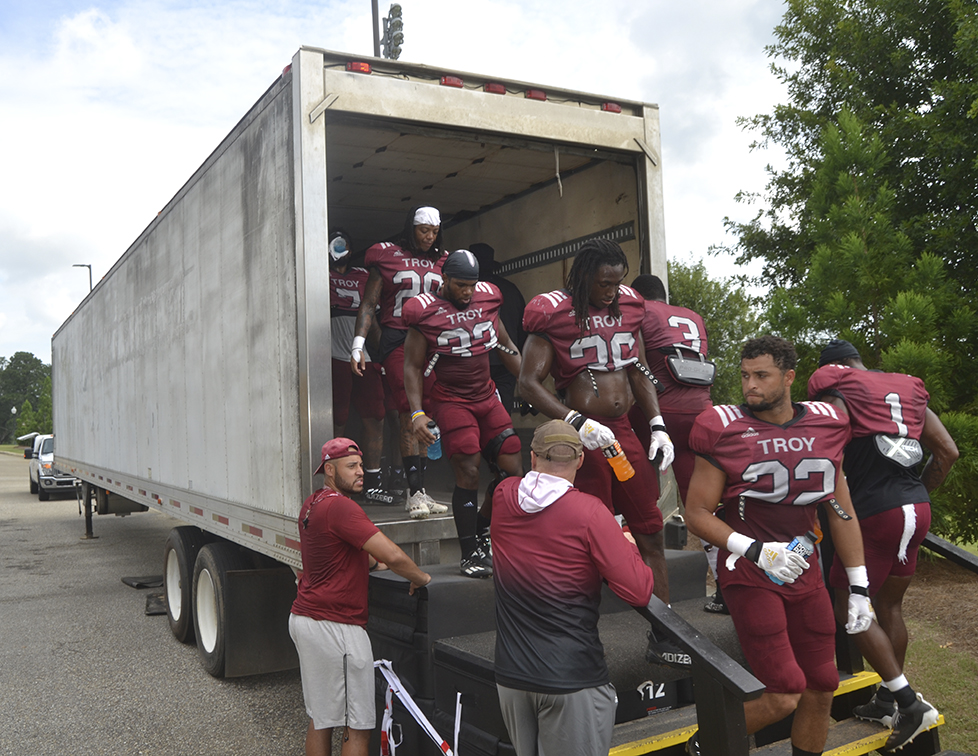 Troy football players pass through the refrigerated trailer next to the practice fields. (Photo by Josh Boutwell)

Fighting the summer heat is always a difficult task for college football teams across the country but those in Alabama truly know the battle with humidity, and Troy coach Jon Sumrall has found a unique way of combating the heat. 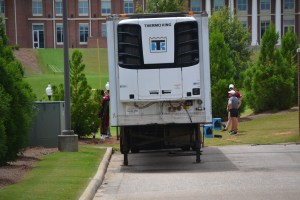 Sitting next to Trojan Arena, just up a small hill from Troy’s football practice fields, is a sight that very few people would think twice about; a refrigerated trailer. The trailers, known as “reefer trailers” by truck drivers, can be seen driving down any highway in the country, used typically to haul groceries that need to stay cool. This trailer, however, is being used to keep football players cool.

“We’re in Southeast Alabama and it can get pretty hot. Temperatures haven’t been awful yet but that humidity has been pretty legit,” Sumrall said. “For us, we can drop that trailer down anywhere from 20 degrees to zero degrees and run the entire team through there and let everyone get in there and get their body temperature brought back down a little.”

Trojan players, maybe even a nosy reporter or two, make their way through the trailer in a line – after drying sweat off – twice per practice. 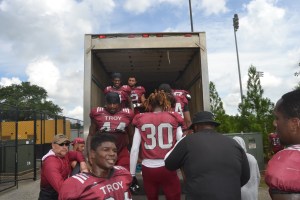 “The guys love it and on day one I got more compliments about that being here than anything else. A lot of the guys were excited about that and I may have gone in a few times myself, just to see to make sure it’s working,” Sumrall said with a smile. “When you’re wearing a helmet that adds to your body temperature and when you add shoulder pads that adds even more. The longer we practice we’ll take two breaks and for the shorter practice, we’ll run the whole team through there once. I think it’s definitely helped us avoid some heat related issues.”

While Sumrall said this isn’t a tactic that the Kentucky staff he was on used, it’s something he’s seen other teams use in the past and his staff felt like it would be beneficial for the Trojans.

“I think a lot of people around the country are doing it,” he said. “(Athletic Trainer) Elias Levanway and (strength and conditioning coach) Rusty Whitt and I talked about the concept and I think it’s something people throughout the Southeast are using for the humidity as much as anything else.

After an off day on Wednesday, Troy is back to work at 9:45 a.m. on Thursday morning.