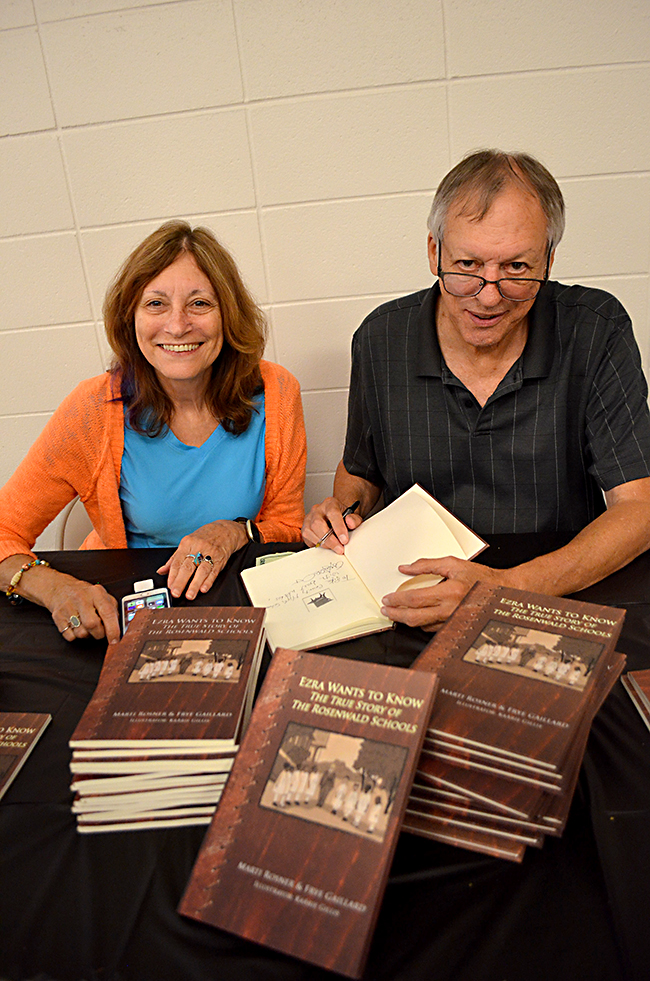 Jaine Treadwell | The Messenger The authors of “Ezra Wants to Know,” Frye Gaillard, right, and Marti Rosner, presented the program on Rosenwald School at the PCHS Art Building on Sunday afternoon. The program was hosted by the Tupper Lightfoot Memorial Library.

The Tupper Lightfoot Memorial Library in Brundidge hosted “Ezra Wants to Know: The True Story of the Rosenwald Schools” on Sunday afternoon at the Pike County Art Building.

The schools were named for Julius Rosenwald, president and later chairman of Sears Roebuck & Company. Rosenwald was creator of the Philanthropic Rosenwald Fund which provided matching funds for the schools. Nearly 5,000 new schools were built in 19 states between 1917 and 1932.

After multiple interviews and extensive research, Gaillard and Rosner tell the story through the eager questions of Ezra, a curious little boy inspired by Rosner’s own mixed race grandchildren.

Gaillard said “Ezra Wants to Know” is a history of hope in a difficult time and a time that should not be forgotten.

Rosner, whose family is from Russia, said there have always been injustices, such as the Jewish people endured. But, also, among the injustices, there always has been the hope of something better.

The Rosenwald schools offered an opportunity for something better for the African American children, as did the Underground Railroad.

The presenters said it is not common knowledge that the Underground also offered a way to freedom by the way of Mobile.

Fewer than 400 Rosenwald Schools were constructed in Alabama, one, they said, was in Brundidge.

According to the Pike County Board of Education’s website, the Pike County Elementary School had its beginning as a Rosenwald School with classrooms and four teachers. As time passed, the county board of education resumed the financial and administrative responsibilities for the school. The original structure was destroyed by fire but was replaced with a five-room structure which became known as Brundidge Junior High School. Several years later, the second building was also destroyed by fire. In 1934, a new six-room building was erected and became known as Pike County Training School.

Theresa Trawick, Tupper Lightfoot Memorial Library, director, said that she has been told a Rosenwald School was also constructed at Tennille. The school building stands today as a Masonic Lodge.