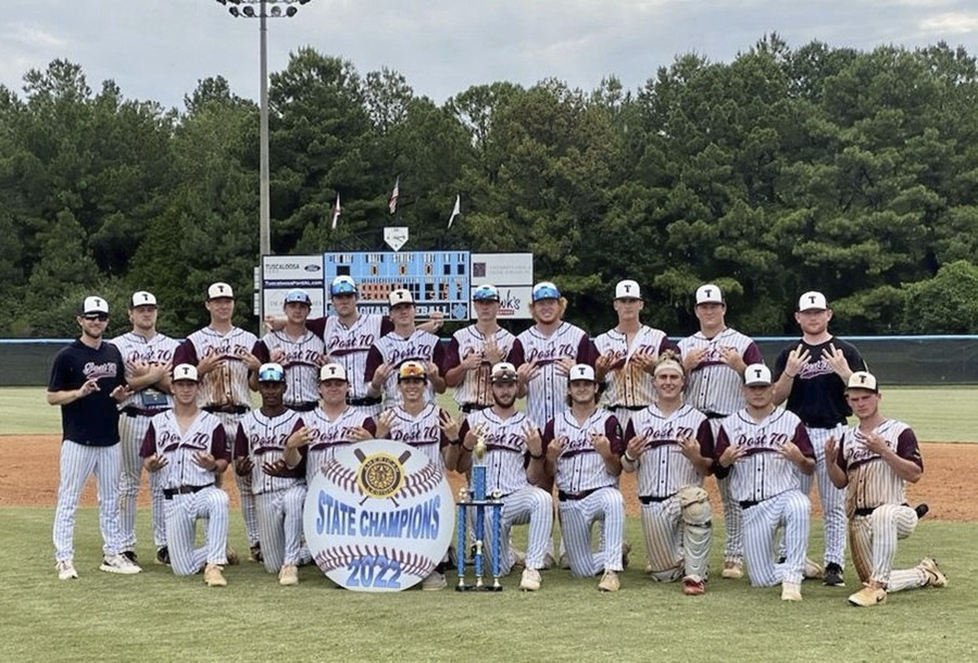 Post 70 traveled to Pelham to compete in the Mid-South Regionals and went 4-1 on the week. Post 70 opened the tournament with three straight wins over St. Joseph Post 11 on Wednesday, Jeff City Post 5 on Thursday and the Tupelo 49ers on Friday. Post 70 then dropped its only game of the tournament to Gonzales Post 81 from Louisiana by a score of 5-3 on Saturday.

Troy and Gonzales rematched in the championship game on Aug. 7 and Post 70 rebounded to win 6-2 and capture the title.

In the championship, Pike Lib’s Darryl Lee blasted a solo home run, while Todd Clay went 3-for-4 at the plate with two doubles, an RBI and a run. Troy signee Brooks Bryan went 2-for-3 with an RBI, a triple and a run, as well. Tucker Jackson pitched six innings and mowed down 10 batters, while giving up just two hits and two earned runs on the afternoon.

For the entire tournament, Bryan – who will be a Troy Trojan in the spring of 2023 – went 8-for-15 at the plate with a home run, a triple, two doubles, nine RBIs and four runs. Lee went 5-for-15 at the plate with two homers, five RBIs, seven runs and a double. New Brockton’s Drew Cashin – who will play at Enterprise State this coming spring – pitched a no-hitter and struck out a pair of batters in his lone appearance on the mound. Pike Lib’s Press Jefcoat also struck out three batters and gave up just two hits and no runs in his only appearance on the mound for Post 70.

The World Series appearance will be Post 70’s first in program history.

“That’s what we’ve been working for, for a really long time,” Hixon emphasized. “We’ve had some teams in the past we felt like could go and win our regional and go on to compete in the World Series, but it just never happened.

“We’ve had a lot of really good college and high school players that have come through here, so it just shows the level of competition you face, it’s really hard to get to this point.”

With Post 70 finally reaching this milestone, Hixon’s players also understand how historic it is for the program.

“It’s kind of like a weight has been lifted off your shoulders,” Hixon said of making it to the World Series. “This is the reason you play ‘Legion Ball.’ So, to win the regional and get to the World Series is really special for our guys on the team and they understand the history they’ve made by doing that.”

Troy Post 70 is one of just eight teams from across the entire country that will advance and play in the American Legion World Series in Shelby, NC. Teams from Texas, South Carolina, Nebraska, Massachusetts, Michigan, Virginia and Idaho will be joining Post 70 in the World Series. While Post 70 wants to bring home a national championship, Hixon doesn’t want his players to be so wound up they forget to have fun.

“I feel like if we play like we did in regionals we’ll have a good chance to compete but I just want our guys to have fun,” Hixon emphasized. “I think this is an experience a lot of them will remember for a long period of time and the main thing I want them to do is to live in the moment and be where their feet are and soak it all in and just have fun with it. I feel like if they do that, and play like we did this past week, we’ll have a good chance to win it.”

The World Series begins on Aug. 11 and games will broadcast both on ESPN and stream on ESPN+.