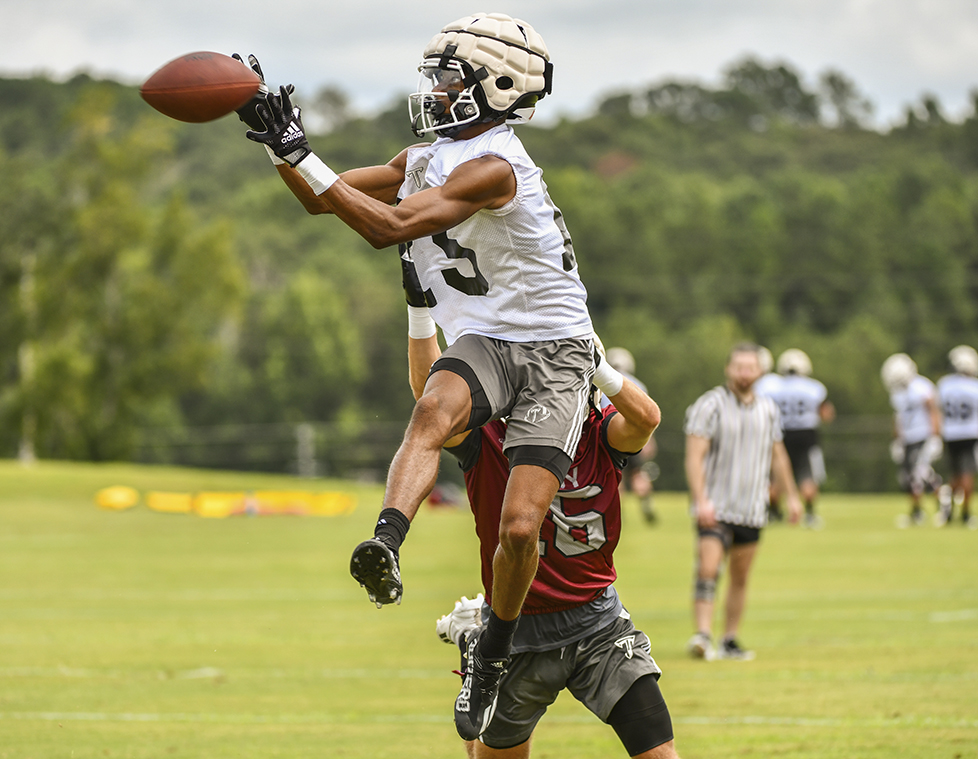 Tez Jonson (15) makes a grab during the first day of Fall Camp on Wednesday. (Photo courtesy of Troy University Athletics)

The Troy Trojans strapped on shoulder pads in practice for the first time in fall camp on Friday as the team continues work towards the season opener.

“The guys were excited,” Troy coach Jon Sumrall said about putting on pads. “In the first period maybe we were a little too excited about having pads on, but I would much rather have to tell our guys, ‘Whoa, whoa, whoa’ than ‘Giddy up.’ I think they’re ready to be more physical after playing the last two days in shirts. I thought the physicality started off the right way for us today.”

Running back Kimani Vidal welcomed the added contact in practice.

“It’s been pretty good,” Vidal said of fall camp. “It’s been really hot but today was a good first day in pads. As a running back, it was good to see the blocks getting set up and being able to run through the hole and kind of get hit a little.”

Defensive end Javon Solomon has seen the tempo pick up at practice already since day one.

“The thing about fall camp is day one is always going to be kind of slow and it was for us, but day three you can already see the tempo picking up,” he said. “I really love that from our team. That’s what’s so special, we take our mistakes and we don’t just get down about it. We actually capitalize on it and change it to help us make plays next time.”

While Friday’s practice was a bit shorter than most practices will be during camp, Saturday’s will be a little longer. Still, Sumrall is concentrated on making sure his Trojans stay healthy through the physicality.

“Like I said yesterday, the best ability anyone has is availability,” he emphasized. “So, our practice plan and model is to build up and make sure we’re taking care of our guys and recovering and not running ourselves into the ground.

“We want to make sure we’re protecting the players’ bodies and making sure they’re hydrated and eating and sleeping the right amount. We’re going to get our work in, we won’t back off too much, but we’re going to make sure when we need to that we’re taking care of our recovery.” 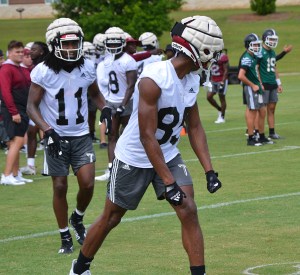 Troy newcomer Eric Shaw (85) is learning the offense at Troy but may get a shot at defense at some point, too. (Photo by Josh Boutwell)

“He’s a very, very versatile, athletic player with a long body and he’s a good kid,” Sumrall said of Shaw. “He’s still very raw from a development standpoint. He didn’t come here proven, in terms of production, from his time at South Carolina, but you can see those raw athletic traits there.”

While Shaw said that he’s getting the offense down, he knows there is still plenty for him to learn.

“The offense is coming to me pretty easy because it’s a lot of the same things we did at South Carolina, just a lot of different terminology,” Shaw said. “I feel like I have most of it down right now, I just have to keep working on the small details.

“I feel like consistency is something I have to improve on and a lot of those small details from the playbook to my routes.”

Since Shaw’s commitment to Troy, Sumrall has suggested the fact that Shaw may have the ability to play on defense.

“Right now he’s working mainly on offense but there might be some things we do with him on defense at times,” said Sumrall. “We’re going to figure out what he can handle but right now he’s predominantly on offense. He’s done some good things on special teams, too. We’re really excited about having him on our team.”

Shaw seems to welcome the possibility of playing defense with open arms. When asked about whether he wanted a chance to play defense he didn’t hesitate.

“Most definitely,” Shaw said with a grin. “If you watch my high school highlights, I played middle linebacker. I’m a football player, I just love playing football whether it’s on offense or defense it doesn’t matter.

“You could put me at kicker and I’ll have the best time of my life. I’d definitely love to get on defense, though.”