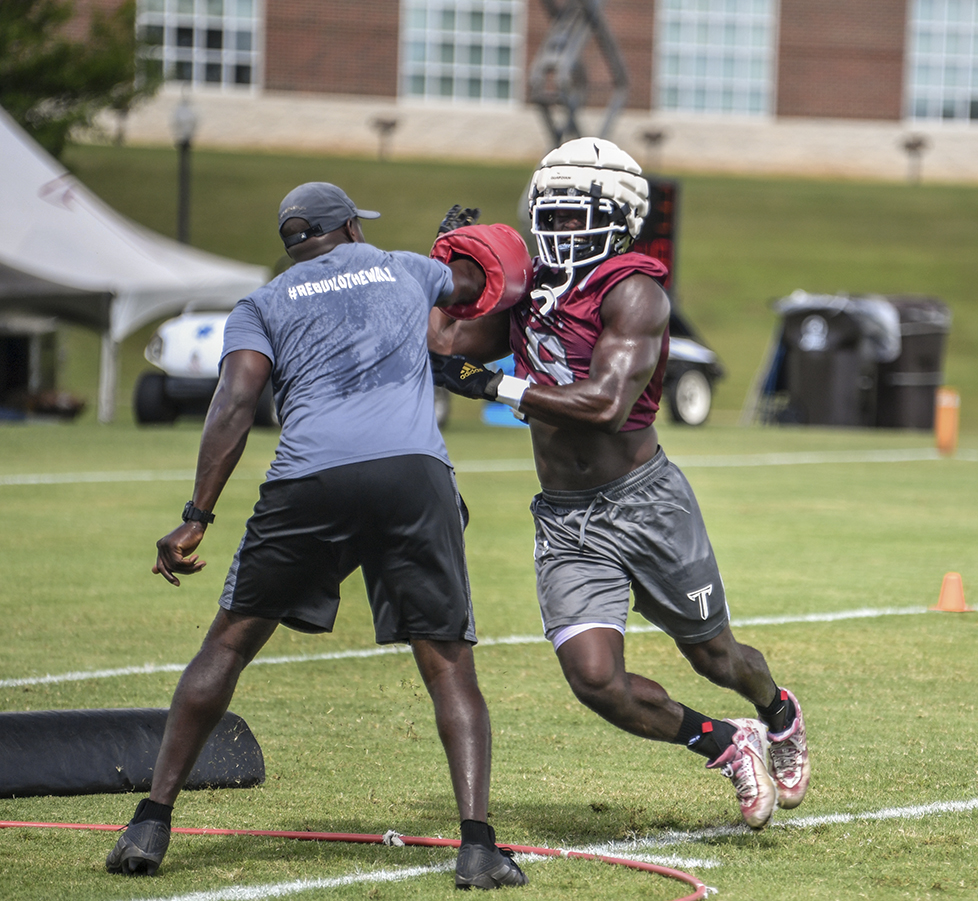 After an up and down start to fall camp, the Troy Trojans football team were able to come through with a more consistent practice on day two on Thursday.

Troy coach Jon Sumrall was more pleased with the way his whole team performed in day two compared to the first day.

“I thought it was a much better practice as a whole today,” said Sumrall. “Yesterday we started really fast and didn’t finish as strong or as clean. Today there was a lot less lulls (in practice) and it was really a lot crisper, sharp practice as a whole on both sides of the ball and in the kicking game.”

Troy center Jake Andrews said he felt like day two was the complete opposite of day one.

“We started off slow, which is kind of the inverse of yesterday,” he said. “We did a good job of protecting the football and I feel like as an offensive line, we did a good job of communicating in that first group. We had a lot of fun out there, too.”

While Troy can’t strap on the pads just yet, there is still plenty of work that can be done in shorts and helmets, especially in the pass game.

“We got a lot done today and I’m encouraged in our passing game. I think we’re in the right direction throwing the football.”

Troy defensive end Javon Solomon said that the players on Troy’s veteran defense feel like brothers and that shines on the field.

“It’s all about what we do out here on our own time and how we spend our own time. We all strive to get better and we stick together,” Solomon said. “We keep a brotherhood on the defensive side of the football. We want to show that on the field.”

That sort of brotherhood is what allows both Solomon and defensive end Richard Jibunor to be so successful despite playing the same position on the same side of the field.

“We work through it and talk about it all the time,” Solomon said about sharing snaps with one another. “Hopefully we’ll get more time to play together on the field (at the same time), but it’s never a problem sharing (snaps) with my brother.”

Andrews said that the offensive line is showing that same form of brotherhood to the numerous new faces in the group.

“We treat everyone like family and that’s how it’s always been since I got here,” Andrews said. “That’s how we’re treating all the new guys, whether it’s the (junior college transfers) or freshmen. We want to make them feel at home. Everyone is trying to learn as much as we can in this camp period.”

This season Troy gets a chance to have nearly two weeks of fall practices before school reconvenes and the NCAA also allowed two extra days of pre-season practice this season, as well. The Trojans will be making a concerted effort to stay healthy with those extra days, while remaining physical.

“Hopefully it allows us to have a couple of max load days and then a recovery day,” Sumrall said. “That way we could really stay healthy and protect our guys. Your best ability is availability.

“Our goal is make sure we’re getting a lot of really god hard work in but at the same time making sure we’re staying healthy and hydrated and getting enough food in our body and taking in enough sleep.”

Troy is back on the practice field Friday morning at 9:30 a.m.