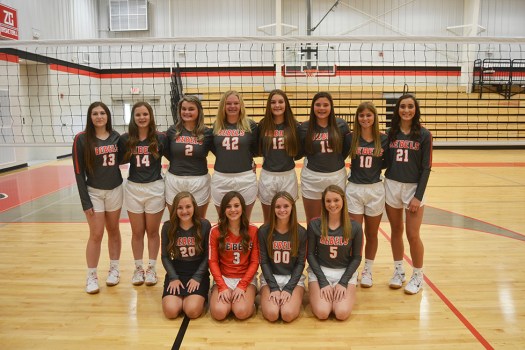 The Zion Chapel Lady Rebels start the season on Aug. 18 against Kinston. (Photo by Josh Boutwell) 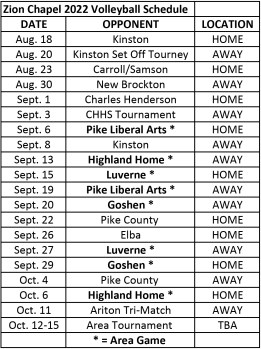 The Zion Chapel Lady Rebels will jump start the first year under new head volleyball coach Chelbie Mobley on Aug. 18 and are currently hard at work getting ready for the season.

Mobley was a volleyball and softball star at her alma mater Kinston and earned a softball scholarship to Enterprise State Community College. She also attended and graduated from Troy University. Former Troy softball star Kaylee (Hussey) Stewart – who played both softball and volleyball at Enterprise High School – will serve as Mobley’s assistant coach.

Mobley said that her first summer with the volleyball team has gone well.

“It’s gone fabulous,” Mobley emphatically said. “We did all of our workouts in the mornings and came back here to touch up on volleyball in general. I think our girls are very excited.” 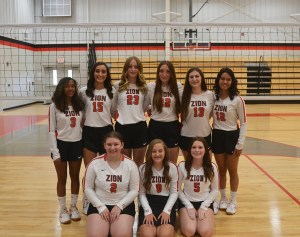 The Zion Chapel JV team opens the season on Aug. 18 against Kinston. (Photo by Josh Boutwell)

Mobley said that the Lady Rebs have to work on their mindset more than anything else before the fall season begins.

“Athletic ability isn’t a problem, it’s a mindset of ‘You’re not going to beat me.’ We haven’t necessarily had that mindset here but we need to develop it,” said Mobley.

Mobley will be looking to veteran Riley Bannon and New Brockton transfer Madison Meeks to lead her group of young Lady Rebels this season.

“Madison Meeks is very knowledgeable of the game,” Mobley said. “She’s very much so a leader for us and we’ll also be looking to some of the younger girls for leadership.

“Riley Bannon is another player we’ll look to that has played Zion Chapel volleyball that can lead the new girls that have never played varsity volleyball before.”

The Lady Rebels have high goals for 2022 but more than anything want to improve on last season.

“I’ve told everyone that what I want is improvement,” Mobley emphasized. “I want to win a state championship, without a doubt, but as long as we improve this year from where we started this summer that’s all I can ask for. I want to see us improve every year.

Zion Chapel will get to work on some of those goals as the season starts against Mobley’s alma mater Kinston. The Class 1A powerhouse Kinston is coming off yet another successful season last year in which the Lady Bulldogs made it to the Class 1A Elite 8. Zion Chapel hosts Kinston on Aug. 18 to start the season and then heads to Kinston for tournament action on Aug. 20. 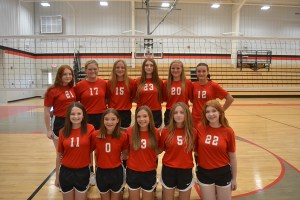 The Lady Rebels will host a tri-match with Carroll and Samson on Aug. 23 and close the opening month against county foe New Brockton on the road on Aug. 30.

The Lady Rebs will host Pike County on Sept. 22 and Elba on Sept. 26 before finishing off September with a pair of area games. Zion Chapel faces Luverne on Sept. 27 on the road and hosts Goshen on Sept. 29. The Lady Rebels open up October on the road at Pike County but host Highland Home in the final regular season area match on Oct. 6. Zion Chapel wraps up the regular season on Oct. 11 in Ariton for a tri-match before the area tournament begins on Oct. 12.