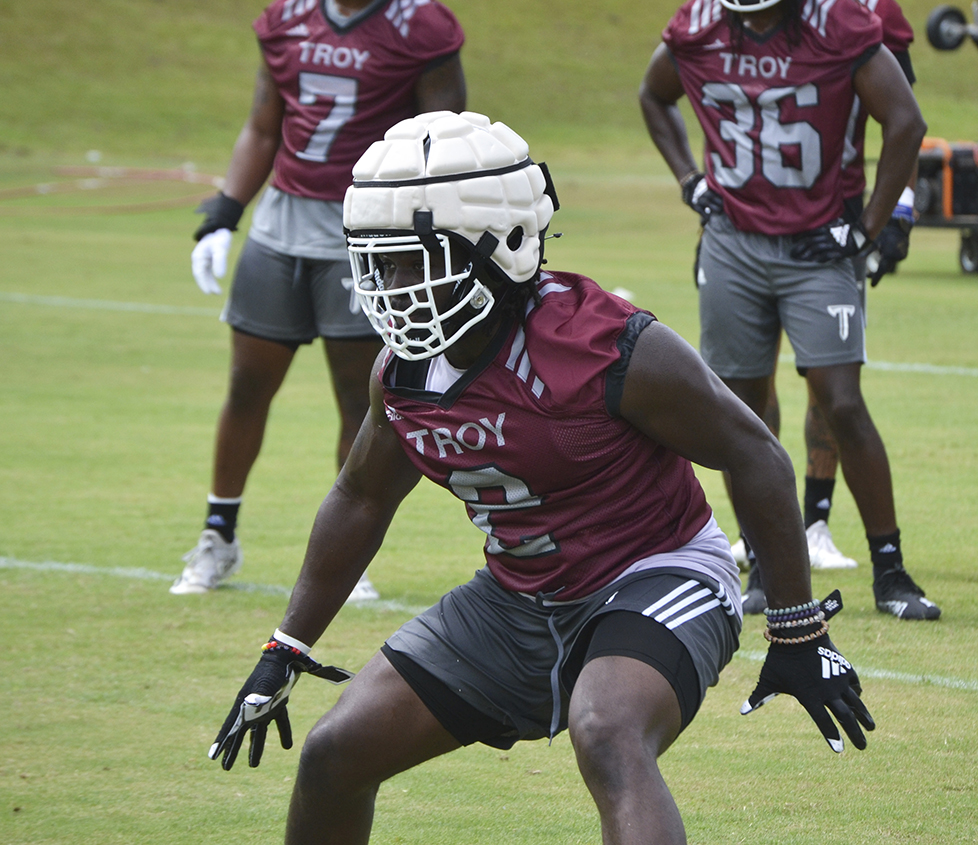 Troy head football coach Jon Sumrall said that his best recruiting job since arriving on campus was convincing sixth-year senior Carlton Martial to stay for his last year of eligibility.

There is very little left for the Mobile native to prove since arriving on campus in 2017. The 5-foot-9-inch linebacker arrived as an all-state linebacker from McGill-Toolen without any FBS scholarship offers. Martial earned Freshman All-American honors as a redshirt freshman in 2018 and with that earned himself a scholarship, as well. Since that time he’s been one of the most highly decorated – and most productive – players in all of college football.

Going into 2022, Martial is on the verge of breaking numerous FBS, NCAA, Sun Belt and Troy records and he’s on the Watch List for prestigious awards like the Chuck Bednarick Award, Butkus Award and Bronko Nagurski Award. 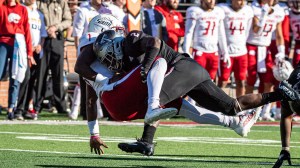 With a list of accolades as long as anyone else in Troy history, Martial had options after the 2021 season, lots of them. There is no question that schools around the country would have been clamoring for an All-American linebacker to jump into the Transfer Portal and the pull of the NFL Draft was also there. So, why did he return?

“A lot of people have asked me if it was for the records or for this or that, but it’s not for any of that,” Martial emphasized. “These past few years I kind of put it on my shoulders how it didn’t end how we wanted it to.

“We need a better voice as a leader on the team that can bring everyone together and be that voice to get everyone going when it’s time to go. I feel like I dropped the ball on that the last few years. I want to grow as a person and a football player and be a better leader for these guys. I also see something special with his team, so I’m excited to be here and excited to be back.”

While Martial is taking responsibility for some of the disappointments for Troy football over the past few years, he goes into 2022 as part of one of the most veteran defenses in college football and a unit that returns other All-Sun Belt players like Javon Solomon, Richard Jibunor, TJ Harris, Will Choloh and a number of other veterans. The familiarity of this group will give the Trojan defense an unquestionable advantage in 2022.

“Familiarity is a nice thing to have out there when you’re returning seven or more starters on defense,” Martial said. “That’s nice having everyone back out there. It’s nice having a guy like Choloh knowing what I’m going to do before I do it and fitting off him and stuff like that.”

Choloh expressed the same appreciation for the veterans on the defense.

“We all started starting the same year, maybe Carlton a year before, and we’ve been in every single fight, every single war together,” Choloh said. “It’s amazing that we can all go out with a bang together.”

Martial pointed to the energy that Sumrall and his staff are bringing to the team as welcome but not surprising.

“It’s no surprise for me,” he flatly said. “I came here when Sumrall was first here. Coming back it’s sort of a familiar feeling with him and I love the new energy he’s bringing. It’s not just him, though.

“It’s the whole coaching staff. I think (inside linebackers) have the most energetic coach there is, Coach (Tayler) Polk, he’s full tilt the whole time going 100 MPH. We’re loving it and we have to put in the work to go along with that.”

After day one of fall practice, Martial is optimistic about the defense but knows there’s plenty of work left to do before traveling to Ole Miss on Sept. 3.

“I feel like it went pretty good for the most part,” said Martial. “Some guys are shaking off some rust but it feels good to get back out there and get our feet wet. I know we still have work to do, though.”