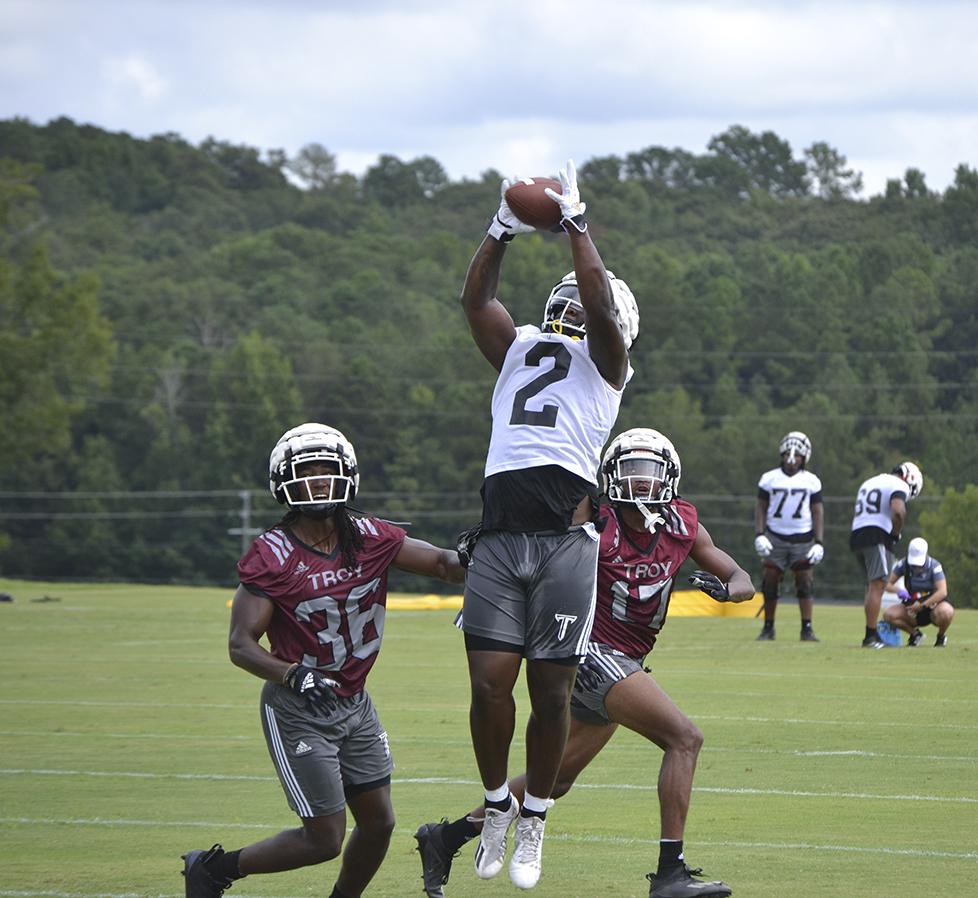 The Troy University football team got fall camp started on Wednesday morning for the first of 11 practices before school starts back.

“I thought early the offense threw (the ball) pretty good, especially during our play action period,” Troy coach Jon Sumrall said. “We got some shots behind the defense, which I thought was good to see.

“I thought we threw the ball as a group better early than maybe sometimes in the spring. That lacked in consistency later in the practice but it was nice to see.”

Both quarterbacks Gunnar Watson and Peter Costelli agreed with their coach’s assessment on the way things went in practice on day one. 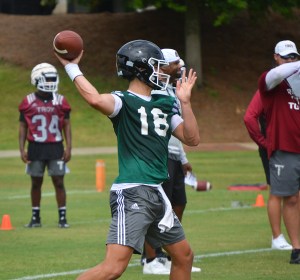 “I thought we started off really strong,” Watson said “We completed a few balls – all the quarterbacks – and I felt like we got tired. It kind of messed up some of our assignment stuff but we’ll get better at that. It was the first day, so I’m excited about what we have going.”

With the arrival of Costelli, all eyes are on the quarterback room once again this fall as competition at the position heats up.

“I’m used to it, it’s been like that for three years now,” Watson said of competing for the staring job in fall camp. “It’s nice to have someone to compete with. You don’t get lackadaisical; you’re always out here competing. So, I’m ready for it.

“We’ve gotten better in the weight room and we watch film together, (Costelli) is definitely going to make us better as a whole and make me better. We’ll continue to make each other better.”

Costelli, who transferred from Utah during the summer, said that Watson has been a big help to him since arriving in Troy.

“Gunnar is a really good quarterback and I think our whole quarterback room is very solid,” said Costelli. “It’s not really about competing against each other, we’re competing with each other. We’re always helping each other and I’m always asking him questions. He’s teaching me a lot and it’s great competing and we’re all doing our best out there.”

Sumrall has already seen improvement from both Watson and Costelli. 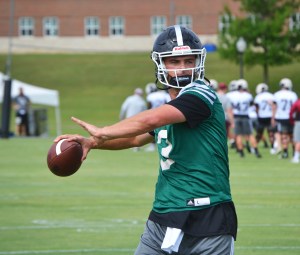 Peter Costelli (3) transferred to Troy from Utah during the summer. (Photo by Josh Boutwell)

“I think Gunnar has improved his body as a whole and his arm has gotten a little bit better, as well,” he said. “Peter I think is throwing it good but the thing that he does that probably jumps out is he can run. From a mobility standpoint he shows he can do some different things for us.”

With the offense struggling much of spring, the Troy coaching staff made a concerted effort to improve that side of the ball, especially in terms of depth, in the offseason and Sumrall can already see the difference.

“I think at quarterback, receiver and offensive line we look a lot different right now than we did in March,” Sumrall emphasized. “I think that there may be still some clear guys that are ahead and some that are behind but I think top to bottom the competition in those rooms is great and there is more guys that are capable of pushing the envelop on winning a job.”

Junior Jake Andrews has fully made the switch to center and is embracing it.

“I think last year (Andrews) was just able to go out and play and Dylan (Bradshaw) ran the show,” said Sumrall. “I think Jake has really embraced him becoming a smarter football player from a football IQ standpoint and he’s embracing that role (at center).”

Andrews was one of four returning starters on the offensive line with center being the only hole on the Troy offensive line. With Andrews moving over to center, it leaves an open spot at offensive guard, where United Kingdom native and junior college transfer Tyler Harvey-Fallows and sophomore Daniel King both took reps with the first team today.

“The way we’ll be recruiting the offensive line is there maybe guys that are tackles or inside players but they also have to have some versatility and flexibility to play other spots,” said Sumrall. “You’re seeing a lot of different guys get reps in there. Tyler Harvey-Fallows got reps with the ones and Daniel King got some reps. He rolled around a bunch of different spots in the spring and all of those guys are getting work in.

“Once the pads come on in a couple of days you’ll start to see who separates and who can move people. There is a lot of new faces in there, especially at that one guard spot and in the second group.”

The rest of fall camp is going to be about seeing what players step up and can grab starting and supporting roles going into the season.

“It’s going to be about who are the guys that can make plays and produce and how do we put them in a position to be successful, and what are our strengths and weaknesses,” Sumrall said. “Lets offset our weaknesses and lets play to our strengths and identify what our guys can function at a high level doing. At the end of the day it’s about players. It’s a players game and it’s about figuring out what players we need to get on the field in certain packages and groups to have success.”