Ring a bell for the joy of life 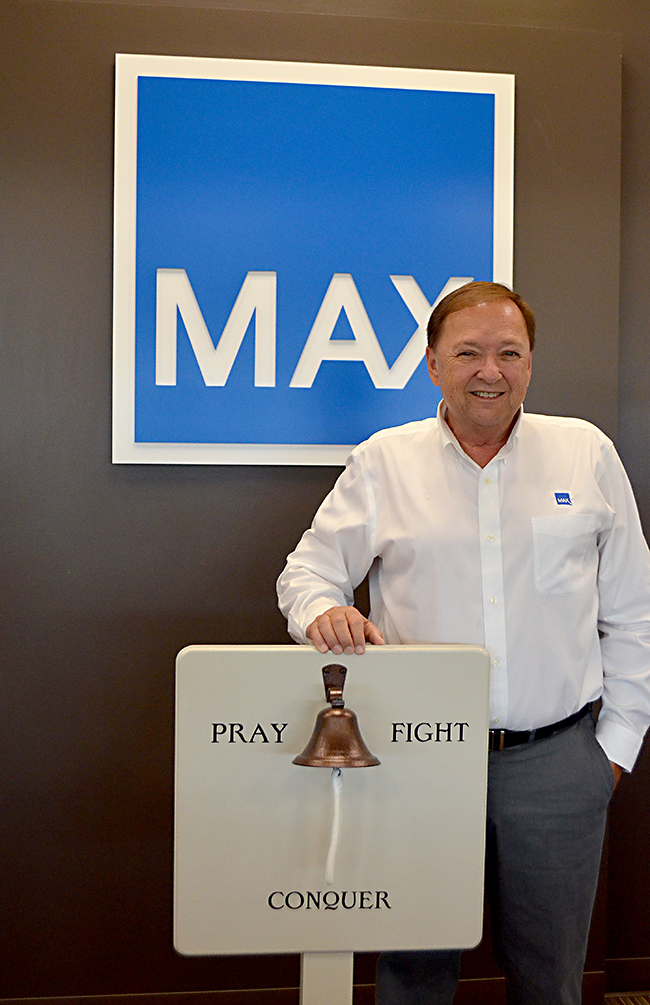 Jaine Treadwell | The Messenger Cancer invaded Pete Jordan’s life and he has fought a long, tough battle. His hope and prayer is that his November doctor’s appointment will be a bell-ringer signaling that he is cancer free. Jordan has a bell in his office at MAX Credit Union for that day. The bell is available for cancer survivors to ring in celebration of a cancer-free diagnosis.

Pete Jordan cannot remember the last time he rang a bell. But, come November, for him, the sound of a ringing bell will signal praise, thankfulness and unbridled joy.

Jordan has completed treatments for a cancer diagnosis of Large B Cell non-Hodgkin Lymphoma in January 2021.

“I had been having stomach problems and Drs. Ben Smith and Rick Gill quickly realized that it was serious and jumped right on it,” Jordan said. “

The diagnosis was too extensive for treatment at the Montgomery Cancer Center so Jordan was referred him to Dr. McDaniels in Birmingham who consulted with Dr. Amitkumar N. Mehta, a specialist in Large B cell non-Hodgkin Lymphoma at the University of Alabama at Birmingham Hospital.

“Dr. Mehta didn’t hesitate,” Jordan said. “He told me how serious the diagnosis was. He didn’t tell me that he could cure me but he said there was a strong chance for a cure but we had to jump on it ‘right now’ before the cancer went to my brain.”

“Jumping on it” meant a treatment of seven chemo-cocktails, Jordan said. “The first was to begin right then.

“The cocktails were administered continuously, 24-hours a day for seven days,” Jordan said. “That was tough lying there day and night but the cocktails were my chance, probably my only chance.”

Jordan said the cocktails caused sores to form in his mouth and he could hardly talk or swallow.

“I never knew how slow time could pass,” he said. “After a week, I was off the chemo cocktail for two weeks.  Pasty and I had moved to Birmingham because, during those two weeks, I had to go back to the hospital for bloodwork and to make sure I had the necessary fluids to keep my system up and going. I still could barely talk or eat and Pasty had to push me around.  Cancer is not an individual fight; it’s a family affair.”

Jordan had a total of seven chemo-cocktail cycles of one week on and two weeks off. One of the cycles was broken when a rest was required before Jordan could cycle again.

“Prayer,” he said. “So many people were praying for me and I could feel those prayers. The cards, phone calls, Facebook messages were encouraging and helped me keep going, helped me endure. It was hard but I never gave up. Not one time. I kept praying and believing.  I wanted to live. I never hollered ‘uncle.’”

Jordan’s faith and his confidence in his doctor’s ability to administer the necessary treatment gave him the strength needed to fight the cancer that had invaded his body.

Pete Jordan ‘s bout with cancer began in January 2021. His prayer is that, in November, 2022, he will have the joy, the blessing, of ringing the bell signaling that he is cancer free.

“At probably many cancer centers, there is a bell that those who have been blessed to be cancer –free can ring in celebration.

“I have a bell that that I am praying to ring in celebration,” Jordan said. “Ray and Bonnie Dansby made the stand, my aunt and uncle, Pat and Paul Floyd, did the lettering and my daughters, Melissa Howard and Tizzy Howard, got the bell.”

The bell is in Jordan’s office at MAX Credit Union in Troy, where he is regional vice president. The bell is available to those who are blessed to cancer free and want to celebrate by ringing the bell.

The bell is there waiting at MAX Credit Union to be rung. For Pete Jordan, it’s a daily reminder of how blessed he has been to come this far. His prayer is that in November, he may ring the bell in celebration of and thankfulness of life.