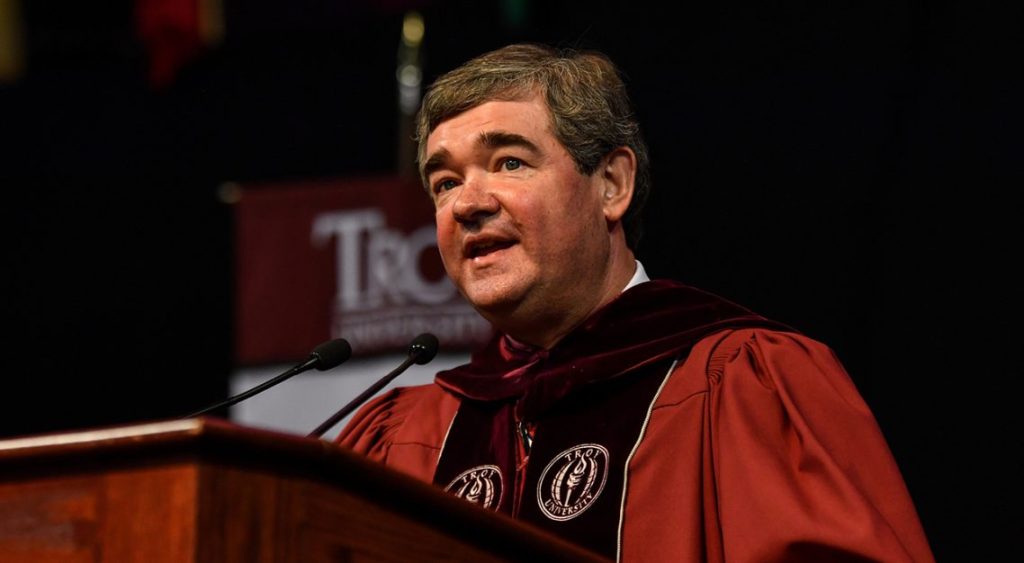 Alumnus, former Student Government Association President and Troy Mayor Jason Reeves on Friday encouraged Troy University graduates to be people of integrity and to nurture themselves and others.

Reeves, who has served as Troy’s mayor since 2012, addressed the nearly 500 graduates who took part in the summer commencement ceremony inside Trojan Arena on the Troy Campus. Recalling the University’s founding motto, “Educate the mind to think, the heart to feel and the body to act,” Reeves focused his remarks on an acronym for the first component of that mission – “Think.”

“The T in think stands for Time,” he said. “Time is the greatest resource you have ever been given. I encourage you to invest your time in the things that are important to you and things that will enable you to make a difference.”

The second word Reeves pointed to was home.

“I want you to consider Troy and this University as a second home forever,” he said. “Regardless of whether you came from a wonderful home or a home where things weren’t so wonderful, you can build your home, that place of refuge for you and for those you care about.”

The third word Reeves emphasized was integrity, encouraging graduates to invest their time wisely to build their integrity.

Reeves also stressed the importance of being “nurturing.”

Finally, Reeves used the K in “Think” to remind graduates of the importance of being life-long learners.

“The K in ‘Think’ stands for knowledge. While we often think of commencement ceremonies representing the completion of your degree, this is just the beginning. Embracing knowledge and becoming a life-long learner is what is going to carry your through in so many ways throughout your lifetime. As you seek that knowledge, think about what to do with it. Use that knowledge to build your home life, to build your integrity, and to nurture yourself, your community and your world.”

Friday’s commencement ceremony included graduates from 28 U.S. states, one territory and the District of Columbia, as well as nine countries outside the United States.