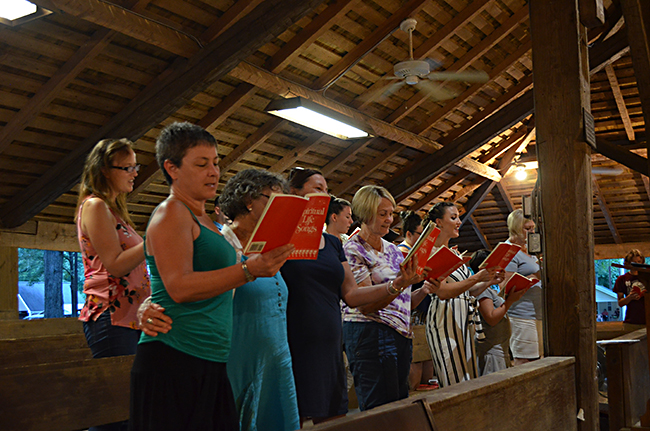 Jaine Treadwell | The Messenger Singing of the old time hymns is the tradition at Pleasant Hill Camp Meeting for worshipers of all ages.

It is the home of a week-long gathering that occurs once a year in July called “campmeeting.”  The grounds are also the home of the historic Pleasant Grove United Methodist Church which has regular Sunday worship services all year long.

Each year, much in pilgrimage fashion, those whose family histories are tied to the camp meeting ground, make their way from all across America, “home” to Pleasant Grove.

The first camp meeting was held at Pleasant Grove in October 1829 under a brush arbor. A few months later, the people decided to build a campground on the spot. When the area was cleared, it was so beautiful, it was called Pleasant Grove.

Prior to the Civil War there were more than 200 tents on the grounds.  Most of them were built of poles and hewed logs. They had chimneys built of poles or boards, and the cooking was done in fireplaces. The lights were candles made by the women.

Today, the 89 “tents,” that were, for a time, canvas, are wooden structures, some rather rustic, others more up to date. Either way, the tents are steeped in history and strong in spirit.

Karen Purser, a resident of Union County, North Carolina, has been going to camp meetings at Pleasant Grove Campground for nearly 70 years.

“My great-great grandfather was one of the early campers, around 1929,” Purser said. “The board of trustees owns the land and the campers own the tents, 89 of them; there is no space for more. The tents, as they are called, are handed down through the generations. Families just don’t sell the tents. They are passed down through the generations. It’s family tradition.”

Purser said campers come from all across the country, from the Pacific coast to the Atlantic, from north to south.

“Back years ago, families stayed close around this area,” Purser said. “Today, they are scattered all around, so the annual camp meeting is like a big family reunion – a family of believers and of one heart.”

Purser said the cabins are called tents and many of them remain much as they were when they were built.

“Some have been remodeled and some have been recently built where the tents first stood,” she said. “The stories that have been told are that, during the earlier years, the tents were actually canvas tents. The campers brought cows along for milk and chickens for eggs and meat.

“A couple of free-flowing springs supplied the water for drinking, cooking and bathing. There was an ice wagon that came around the campground. The ice was chipped off big blocks to keep food cool and people too, when the sun was so hot.”

Outhouses were important structures but, too often, were too far and in-between.

“Of course, today, we have the many of the conveniences of home but the spirit of the ‘campmeeting’ is the same,” Purser said. I can’t put into words the sprit that is here, whether it’s the singing, the preaching of the word, the fellowship, the laughter of the children or just the quietness of early morning and the beauty of nightfall. Pleasant Grove. It’s the spirit of the Lord.”

David Boyce of Wesley Chapel, North Carolina said the campmeeting is a gathering of kindred spirits intertwined with the history of the Pleasant Grove Campground.

“You hear the adage Back to Basics a lot’ but that is what ‘campmeeting’ is for me – a time to get back to the basics of faith, family, and friendships,” Boyce said. “Faith plays a huge part in our campmeeting week. I dedicated my life to Jesus Christ at Pleasant Grove when I was 13 years old. And it excites me to see our kids and grandkids know that when the bell rings, it’s time to go to the arbor and worship. Not only is ‘campmeeting’ a time for spiritual renewal for us, but it also gives us a chance to renew relationships with family and friends. I’ve been attending Pleasant Grove Campmeeting since I was born. It is the highlight of each and every year.”