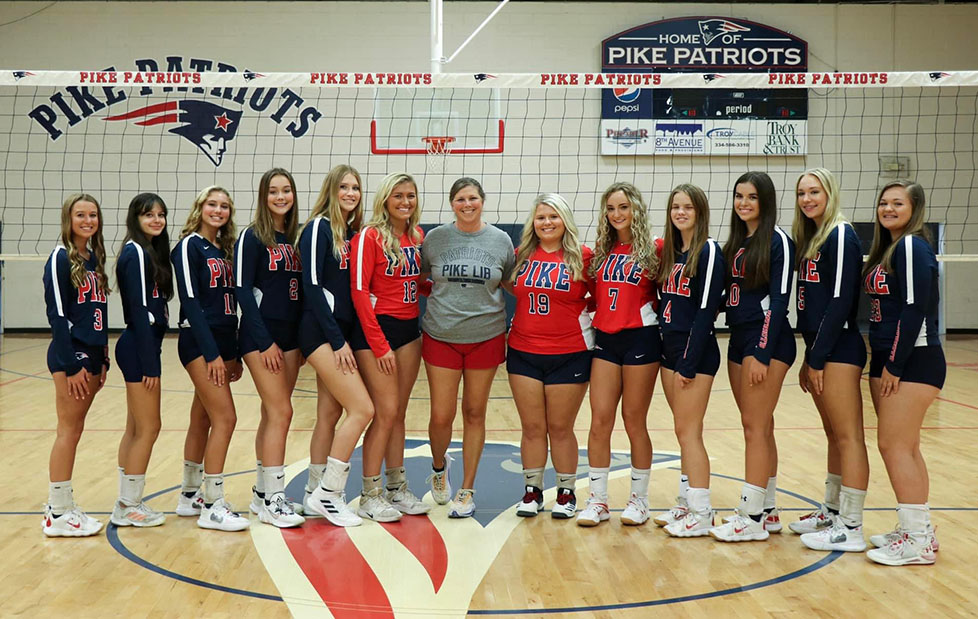 Pike Lib went 3-0 against all Pike County schools in a “play date” this week. (Submitted photo)

The Pike Liberal Arts Lady Patriots are just a few weeks away from the school’s inaugural volleyball season in the Alabama High School Athletic Association.

This week, Pike got a sneak peak of what life in the AHSAA will be like in a four-way county “play date” alongside Charles Henderson, Goshen and Pike County. The Lady Pats varsity squad went 3-0 on the day, picking up wins against all of their county foes.

“I thought they did really well,” Pike Lib coach Lara Lee Jones said. “I was really concerned going in because I always feel like we’re not prepared, that’s just me, and we have a really young team.

“They did well, though, and overcame all the obstacles and it was a good showing for us and a good time showing them the public school side of things isn’t any different than what we’ve seen before.”

Jones said that she would be leaning on her veterans like seniors Emily Bryan and Mari Grace Brooks along with juniors Addi Renfroe and Emma Baker to lead the way this season. Jones said communication will be keep for the Lady Pats this season.

“We have to keep our communication and teamwork going, those are the important things to make sure we move forward,” Jones emphasized. “I am big on being supportive of each other, so I need that on the court so that we aren’t individual players out there but a whole team.

“We can’t get down on each other and we have to raise ach other up no matter how things are going. As long as we have that core togetherness and teamwork, we’ll be fine.”

Jones said that her only goal for this season is for her players to see they can have success in the AHSAA.

“I know people think I’m crazy but I feel like coming out of the AISA we have seen some of the better volleyball on a more consistent basis in our area,” Jones said. “I just want the girls to be successful and to see they can compete no matter the level of play and that they don’t get too worked up about it. So many of them are nervous about being in public school ball and to be successful would help them realize they can compete with anyone. That’s what I want to see.”

Pike will open the season on Aug. 29 on the road at Elba before opening up area play at home on Aug. 30 against Luverne. The Lady Patriots then travel to Goshen and Zion Chapel for back-to-back area games on Sept. 1 and Sept. 6.

On Sept. 8, Pike will host Charles Henderson for a battle of the two Troy squads for the first time in school history. Pike Lib hosts Carroll on Sept. 12 and travels to Barbour County on Sept. 13.

Pike will play its first tri-match of the season against McKenzie and Luverne on the road on Sept. 20 before heading to Highland Home for an area game on Sept. 22. The Lady Patriots head to Ozark for a tournament at Carroll on Sept. 24 and then close out September with two straight home games against Highland Home and Barbour County.

The Lady Pats will finish off the regular season against Goshen at home on Oct. 3 and Charles Henderson on the road on Oct. 4.