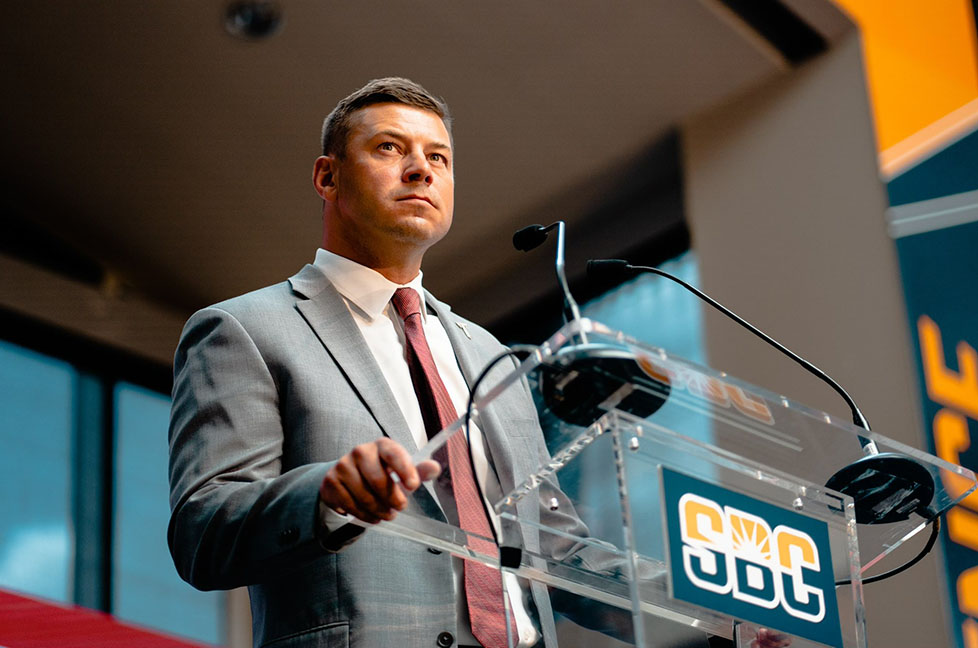 The trio took the main stage on Wednesday morning to preview the upcoming season as the team gears up for the start of fall camp in August.

“Since showing back up on campus full-time in Troy on Jan. 4, we have been hard at work establishing the daily standards, core values and culture of what our program is going to look like,” Sumrall said in his opening statement. “Credit to the young men in our program because they have fully bought in. I am grateful of what we have in our locker room and the makeup of our team. When new coaches come in, they say, ‘Give them a few years to get their guys in.’ Well, these are my guys, whether I recruited them or not.”

Sumrall applauded both Martial and Stidham for their accomplishments at Troy on and off the field. Sumrall said that when he arrived at Troy, his biggest recruiting job was Martial himself, who Athletic Director Brent Jones said on Tuesday had informed the school he would be leaving Troy before Sumrall’s arrival.

“When I got the job my biggest recruit was Carlton Martial, not a high school kid,” Sumrall said. 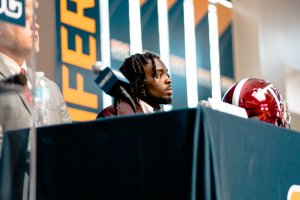 Both Stidham and Martial talked about the change in culture in the locker room that has happened since Sumrall’s arrival.

Stidham said the shift has also been a result of he, Martial and other veterans on the team.

“We’ve had a cultural shift within our locker room and it’s being led by internal leadership and I think that is something our team has been missing,” Stidham emphasized. “We’re making strives every day to push the culture, keep the integrity high and keep the competition high and I think that will make us very competitive football team come the fall.”

In regards to recruiting, Sumrall said that Troy has historically benefited from the junior college system and says that is something he believes Troy can continue to utilize, especially with the NCAA Transfer Portal becoming such a huge part of recruiting.

“The JUCO system has always been good to Troy and it’s good for the Sun Belt. We actually took more kids from the JUCO system than we did the Transfer Portal this year,” Sumrall said. “We’re going to start (recruiting) within our home base in the State of Alabama and recruit out from there. The JUCO ranks, especially probably right now, has been a good fit for us because of the Transfer Portal. I think there are some really undervalued JUCO prospects out there that can help us.

“One of the (JUCO players) we signed actually grew up in England, so I’m not afraid to take a player from anywhere in the world and we’ll recruit globally if we need to.”

When talking about Martial and the talented Troy defense, Stidham said that playing opposite of those guys only benefits the offense. 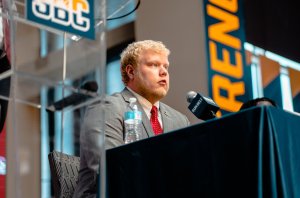 “Having guys like Carlton Martial on the other side of the ball does nothing but breed competition and makes you a better player for it,” said Stidham. “Our offense will benefit greatly from the competition that comes from our defense.”

Turning the attention to the 2022 season, Stidham stressed that Troy will be fired up for the season opener against the SEC’s Ole Miss.

“I don’t like it when guys say, ‘It’s just another game,’ because it’s not,” Stidham flatly said. “It’s an opportunity for us not just to represent Troy but to represent the Sun Belt Conference in a positive manner and show how competitive our conference is. We’re going to be fired up for this game and we’ll be ready to go.”

The Trojans will report back to campus on Aug. 2 before fall camp begins on Aug. 3.