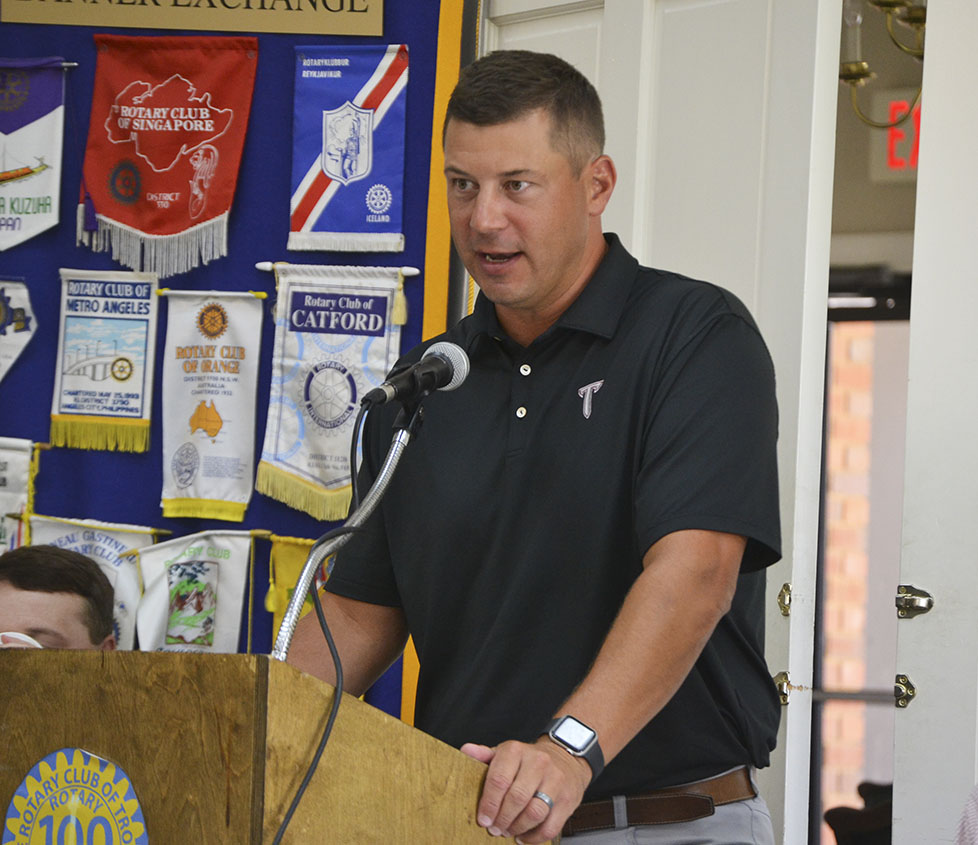 Troy University Athletic Director Brent Jones and Head Football Coach Jon Sumrall stopped by the Troy Rotary Club’s meeting at the Troy Country Club on Tuesday to speak ahead of their appearance at Sun Belt Media Days in New Orleans, LA on July 27.

Jones discussed the facility upgrades and the additions on the coaching staff throughout the athletic programs and how that has driven excitement at Troy in recent months.

“The new seats are being installed in a week and a half or so,” Jones said of the upgrades being done at Riddle-Pace Field. “That’s going to be special. It will be the gem of the Sun Belt Conference. This is the best group of coaches, administrators and student-athletes we have ever had and it’s exciting.”

Jones also said that the Athletic Department has raised over $250,000 in a two-month period from donors and also set the benchmark of 1,887 total donors, up from just 1,000 a year and a half ago. Troy has also sold more than 1,000 football season tickets since announcing the “Pack the Vet” campaign, as well. Jones also pointed to the growth in the Sun Belt itself. 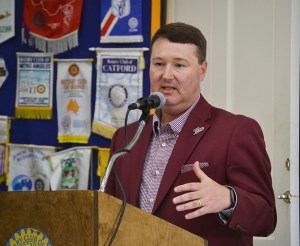 “Eight years ago the Sun Belt was left for dead,” Jones said. “All the national pundits were saying the conference would fold. To see how strong we are now and the schools that we have added is simply outstanding.

“Outside of one other conference – the SEC – the Sun Belt is seen as having handled conference expansion the best. We wanted commonality, regionality and like-minded academic institutions that also play at a very, very high level.”

Troy is also offering student-athletes the opportunity to study abroad once every four years, an experience the men’s basketball team will be enjoying later this week when they head to Costa Rica.

“Every single student-athlete is going to have the opportunity to study abroad either as at team or individually,” Jones said. “No other university is doing that.”

Sumrall called the month of July “talking season” in college football and said that he’s had a message for his players during this time.

“I have been really glad that we haven’t been picked first (in the conference) by anyone because we don’t deserve that yet. We want to get to that point where we force people to list us up there but we haven’t earned it yet. We have the ability to prove them right or wrong this season and we are hard at work to do just that.”

Sumrall said that he can feel the excitement growing in the football program as the season draws nearer.

“There is an excitement in our program. Our young men have been hard at work all summer long,” he emphasized. “They put in the hours and I challenge them everyday that working hard doesn’t guarantee you anything other than an opportunity to be successful when those opportunities come on game day.

Following the spring, Sumrall pointed to a number of areas he wanted to add depth to the football team and he was pleased with those additions that have been made.

“Everything that was done was very strategic,” Sumrall said. “I don’t believe in just acting on feelings. One of the core values of our program is ‘Love.’

“I define ‘Love’ as not a feeling but as an action. We sat down and identified where we needed to add some pieces on this team. A lot of the pieces we brought in will make plays for us in the fall and will add depth to our team and drive that competition amongst the team.”

One place the Trojans attacked was adding depth across the offensive line, bringing in a number of junior college transfers.

“The depth was not there (before), so we brought in several transfers and I had the opportunity to watch those guys the last few weeks,” Sumrall continued. “I can tell you our depth has gotten better on the offensive line. I don’t know if we will be the best offensive line in the league yet but we will be eventually. We have vastly improved the overall landscape of what that (offensive line) room looks like.”

The headliners of the incoming transfers were former Utah quarterback Peter Costelli and South Carolina receiver Eric Shaw. While Sumrall said he can’t tell anyone whether Costelli will win the starting job just yet, he’s already improved the position.

“We upgraded at quarterback in terms of depth,” Sumrall emphasized. “Whether that means Peter is going to be the starter or not will be determined through fall camp.

“I’ve had the chance to watch him throw and run and he ran over 21 MPH on our speed machine, which is basically saying he runs as fast as an NFL receiver. Peter has a very, very high upside.”

“Bringing Peter in has helped make Gunnar better,” Sumrall said. “Gunnar has done good things for this program but when I got here in December I watched him work out and he kind of looked like a soft-bodied kid.
“I said, ‘You’re too grown and mature in this program to look like that. It looks like you don’t lift weights.’ I went into the weight room and he could only do one pull up. A few weeks ago he was cranking out like 9, 10, 11 pull-ups with weighted chains around his neck. He’s committed himself. Any time there is competition that makes it harder to be “the guy” it forces you to take your game up a little bit more.”

While Shaw was recruited to South Carolina to play receiver, he was also one of the top rated defensive players in the State of Alabama coming out of high school. That versatility gives Troy a number of options.

“Eric Shaw is a really talented kid that played tight end and receiver (at South Carolina) and he’s someone I think could be a really talented defensive player, too. We brought him in as an “athlete” when we brought him in,” Sumrall said. “When I was at Kentucky we had him ranked as one of the Top 5 outside linebackers in the country coming out of high school. Shaw has a really high upside, too.”

Sumrall, along with Carlton Martial and Austin Stidham, will be speaking at Sun Belt Media Days at 10:30 a.m. on ESPN+ on Wednesday.