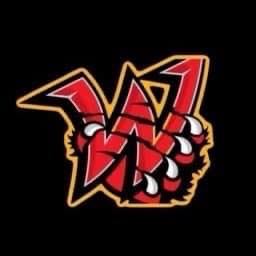 A new “adult football” team coming into the area has launched and is actively searching for athletes to play in the inaugural season of the Wiregrass Wolverines.

The team was co-founded by veteran football coach – and military veteran – Will Love of Ozark and Elba native Summer Stricklin this summer. Love graduated from Carroll High School and fell into coaching during his military career. Since then he’s been a part of two championships with other adult football teams and coached a youth football team to a championship in Goshen recently.

“We came up with the idea of trying to get the talent in this area from Pike County, Coffee County, Dale County, Covington County and all the surrounding areas and give them an opportunity,” Love said of forming the team. “We know there is a lot of talent in this area but there really isn’t anything after high school unless you’re able to get a scholarship or able to walk on somewhere. We wanted to bring more attention to the athletes in this area.” 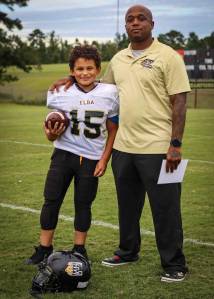 Will Love, right, has coached at both the youth football and adult football level for a number of years. (Submitted photo)

“We want to give that exposure to our players,” he said. “We’ll have people keeping stats on both offense and defense and we can help them with their film and that’s the ultimate goal, to get these guys seen.

“Even if no one gets a scholarship but we manage to help a few of these kids walk-on somewhere, that’s a win-win situation for us. This can be a second shot to do something they love and possibly continue on playing.”

The Wolverines was founded as a non-profit organization, as well, with the goal of helping out the community, especially with youth football teams. The Wolverines have already run one fundraiser to help provide equipment for area youth teams.

“If you’ve ever had a kid in athletics you know how expensive it can get,” Love said. “We wanted to do our part in the community.”

Love’s previous experience with what is typically coined as semi-pro football has led to his decision to refer to the Wolverines as “adult football” instead.

“When people think of semi-pro it gives them a bad taste in their mouth, that’s one of the hurdles we’ve had to overcome,” said Love. “When someone says semi-pro that automatically turns them off. So, we don’t use that term. We use “adult football,” which has gotten a response of 50 players planning to show up for our player combine.”

Following the collapse of the team that Love was helping coach in Montgomery, he and Stricklin decided to launch their own team at home.

“A lot of things ran that team into the ground and it really just never kicked off like it should have,” Love recalled. “That’s what brought us the idea of starting a team down here. You can’t do it on your own so I called 13 other people, those people are more than friends to me, I would say they’re more like family members.

“We formed a committee that we call Ground Zero. We all come from different walks of life but one thing we have in common is we love football. There are people that own their own businesses, we have players, we have some of the coaches as a part of it, too. Everyone has good ideas and we try to use everyone’s ideas, so that we can be effective and do things the right way.”

Stricklin is handling much of the day-to-day aspects of the team and organization.

When running a non-profit, money will always be an obstacle, especially while also trying to run a football team. Along with doing fundraisers to help out with youth sports in the area, the Wolverines are accepting sponsorships and donations to help with running the team and providing for things like equipment. One local school has already helped in that area.

“Marc Sieving from Elba High School really helped us out and donated some shoulder pads to us,” said Love. “That’s big for us, so we want to give a big shout out to Coach Sieving and Elba High School, the Wolverines really appreciate that.” 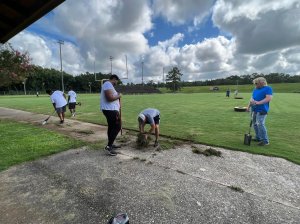 The Wolverines will begin playing in February of 2023 as a part of the Amateur to Professional Developmental League competing against teams from Alabama, Mississippi, Florida and Louisiana. The season will span from February through June and the Wolverines will play their home games at Miller Memorial Stadium, also known as “Foggy Bottom,” in Elba. In fact, the Wolverines recently hosted a successful “community clean up” day at the historic stadium that has seen its share of playoff games in the past.

“We’re looking at some stiff competition, which is what we want,” Love emphasized. “We want to be challenged and we want to beat the best. We’ll be up for the challenge when the season starts.”

The final hurdle that the Wolverines have to overcome is talent, in terms of players and coaches. When a team is completely non-profit, meaning no one gets paid, that will also always be a hurdle, but Love has already landed a number of coaches on his staff. Some of the coaches that Love has reached out to includes former Elba all-state receiver Joshua Caldwell, who also played in the Canadian Football League. Goshen native Justin Kilpatrick, who coached a youth team in Goshen alongside Love previously, has also joined the staff along with longtime track and field coach Antonio Starks and others. Love said that he hopes to add two more coaches to the staff before practices officially begin.

So far, more than 50 players have also signed up for the Wolverines’ upcoming football combine in August. Among the players already a part of the team is Brundidge native Ethan Sessions. Sessions is a graduate of Pike County High School.

The Wiregrass Wolverines will hold their Football Combine on Aug. 6 at Miller Memorial Stadium in Elba beginning at 7:30 a.m. for any players that wish to try out for the team. Anyone interested in signing up for the combine can contact (334) 470-6310 or E-mail at wgwolverines22@gmail.com.