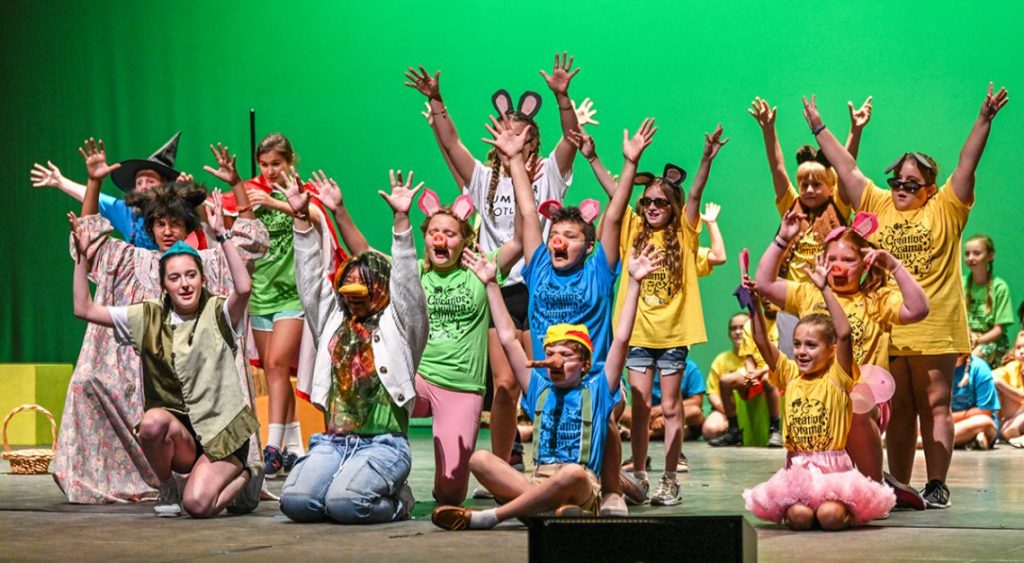 Troy University Children from across the southeast and beyond took part in the annual Summer Spotlight Creative Drama Camp from July 11-15.

Gabbie Reeves, a 2022 Troy graduate, served as the Head of Technology and worked with the students on costumes, sounds and lights, props and stage crafts. Over the course of the week, she taught the kids theatre vocabulary—like strike, which means to break down the stage and put everything away—and taught two students how to work the light and sound board for the Showcase.

“One of the students in my group also got to be my costume assistant, which was really cool,” she said. “I always try to get them into actual theatre roles for the Showcase. I really enjoy the amount of creativity the kids leave with. They leave so different from when they got here.”

This year’s production, “Jack and the Bead Stalk,” written by Theatre and Dance lecturer Jenny Meadows, alluded to the overall theme of this year’s Spotlight.

“She wrote an incredibly perfect script for summer spotlight,” said Sharon Carroll, Director of Production and a Troy alum. “It was very encouraging and uplifting. It’s so much fun, but it represents the culmination of a wonderful week of rehearsing and learning. There are a lot of cheers, but there’s also a lot of tears.”

Students performed The Greatest Showman as the finale.

“I have a lot of fun doing theatre, but I wasn’t expecting to get the lead role,” she said. “It was amazing, but I also really liked singing ‘The Greatest Show’ for the finale.”

Emaleigh, 10, of Troy, Ala. has been attending various Summer Spotlight camps for the last five years and said she looks forward to “everything.”

“I have a passion for being on stage, I love the costumes and the designs,” she said. “The camp really opens kids up to being sociable to other kids. It’s good for especially only children or homeschooled students to get comfortable acting around other kids.”

Gigi Carroll, 13, from Panama City, Fla. and Ethan, 14, from Savannah, Ga., became friends seven years ago at their first Spotlight camp. This year, they both served as apprentice counselors for the younger children.

“I get to see a lot of my friends, and I really like to help out the younger kids around the camp,” Ethan said. “I just like being able to be involved.”

Gigi also had a role as one of the blind mice in the final performance of “The Greatest Show.” When asked what advice she would give to those considering coming to the camp, she said to take the leap and do it.

“The people here are really welcoming, and you feel really comfortable around them,” she said. “It’s a great learning experience.”

Carroll, who just finished her seventh year as production director, said the welcoming atmosphere is what brings kids back year after year.

“These are their people. They all feel like they belong here and that’s such a gift,” she said. “It’s just a bunch of creative kids who feel like they’ve found their place in the world.”