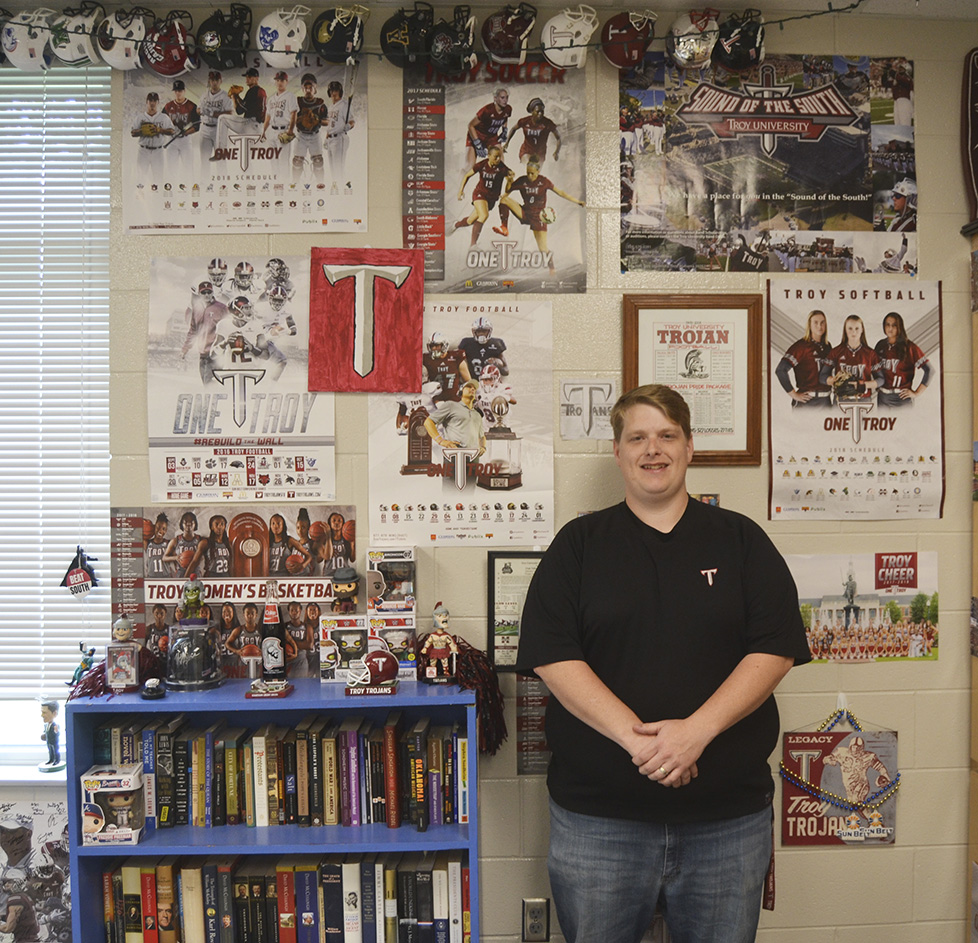 When you’re talking about football “super fans” a lot of wild stories will come to mind, but Troy University alumnus – and teacher – Ben Whitehead chooses to share his fandom with his students in positive ways.

Whitehead grew up in Headland and wasn’t initially a Trojan supporter at all. Troy fans shouldn’t pick up the pitchforks just yet, though, as he quickly switched his allegiance.

“I grew up an Alabama fan,” Whitehead says. “I didn’t go to my first (Troy) game until the final Jacksonville State game (in 2001). I was mad about it because that was Iron Bowl week and my dad was taking us to see Troy State.

“I was like, ‘I don’t want to go to Troy State!’ We went and had fun and then the next week we went to the North Texas game and after that it was pretty much a lock for me. We always went to Troy games.”

In high school, Whitehead was already thinking about attending Troy but the 2004 upset of Missouri is one of the reasons that locked it in for him.

“It was an insane game and we were already down 14-0 by the time we got there,” Whitehead recalled. “We’re walking across Tailgate Terrace and I could see the scoreboard and I was like ‘We’re done.’

Then, finally we had that legendary play with Junior (Louissaint) and everything turned. I had only been going (to Troy games) for four years at that point but I had never heard ‘The Vet’ as loud as it was. I thought if this is what it is now, just imagine what it will be like later. I was just hooked. Plus, they told me I could get into games for free with my student ID, so there was really no other choice for me.”

After graduating from Troy, Whitehead started writing for a local newspaper but after his wife, Anna, got pregnant with their first child he decided to turn to teaching for a more stable paycheck.

“I didn’t even want to get into education to begin with,” Whitehead emphasized. “We both decided to pivot to education. I was still apprehensive and nervous about it but I got into my first classroom and it completely blew my mind. I realized this is actually what I’m meant to do.”

Whitehead began his teaching career in Florida and has been a teacher at Rehobeth High School for the past five years. Whitehead’s Troy fandom spilled over into his classroom when he began to decorate his class with Troy merchandise.

“It was thanks to (former Troy Athletic Director) Jeremy McClain,” Whitehead said. “He helped get me some Troy posters to put in my room because I had realized I had nothing representing Troy.”

Along with decorating his classroom in Troy gear, he also had begun collecting Troy mini helmets. That hobby then swelled by accident.

“I thought team pennants would be cool, so I started writing schools to ask them if they would donate pennants for my classroom,” he remembered. “I don’t really remember what started it but I started asking schools if they had any mini helmets they could donate and it started to grow from there.” 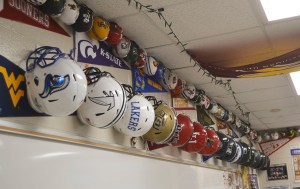 Whitehead has more than 190 mini helmets and dozens of full-size helmets. (Photo by Josh Boutwell)

“It started with an idea that I just wanted full sized helmets of the schools I worked at,” he said. “I never really thought about it for colleges until I had written Nevada and their equipment manager was like, ‘I would love to help but I don’t have any mini helmets, would a full size helmet work?’

“From there, I figured a lot of these colleges have to go through reconditioning with their helmets and if they can’t be used anymore they are useless. So, I decided to try and reach out to schools to see if they were willing to donate those helmets they couldn’t use anymore.”

Whitehead’s helmet obsession even led to him helping design a new helmet for Montclair State University. During COVID-19, Whitehead started a Twitter thread featuring his favorite helmet design from each FBS team. At that point, an assistant coach from Montclair State reached out to him.

“I had never even heard of Montclair State in my life,” Whitehead said with a smile. “He said that they were trying to revamp their helmets and get a new identity and that he liked my style and wanted to do know if I would help him out with that. 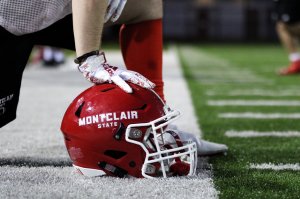 “We messaged back and forth and he sent me designs and I sent him designs I thought about. I suggested a classic look with just their name and a single stripe down the helmet, similar to Southern Miss’ helmet and they went for it.”

Despite the dozens of helmets lining his classroom, Whitehead said the one he hasn’t gotten his hands on is the one he wants the most.

“As far as helmets goes, my (holy) grail is getting a Troy full-sized helmet,” he said. “That’s the one thing I haven’t gotten yet.” 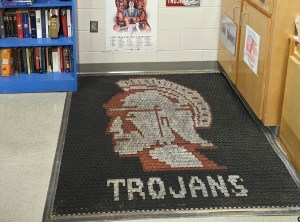 His Troy memorabilia has continued to swell along with his helmet collection, as well. Whitehead has added numerous classic football programs to his collection along with a genuine Trojan doormat from the old Troy State Fieldhouse, donated to him by longtime Troy athletic trainer Chuck Ash’s son.

Whitehead says he’s been able to acquire much of his memorabilia from Facebook Marketplace finds and EBay. He’s even gotten his hands on programs from the 1948 Paper Bowl and the 1968 and 1987 National Championship games.

“My holy grail with programs is I have never even seen the 1984 (National Championship) program and that is my dream to get it,” Whitehead said.

While sharing his love for Troy and football helmets is part of why he decorated his classroom that way, he said it’s also about making his students feel comfortable.

“The kids really enjoy it and my idea initially was to have something where kids feel comfortable,” he emphasized. “One of my kids that just graduated sent me a message and said, ‘I just want to thank you for always giving us a place where we can feel comfortable and be ourselves.’ That’s the whole idea.”

Returning to his Troy fandom, Whitehead said picking the greatest player of all time for Troy would be like picking which of his daughters, Katie Claire and Laura Beth, is his favorite. It just can’t be done.

“I can’t answer you who the GOAT is because that’s too hard,” he continued. “I can give you my Mount Rushmore of Troy, though. My four best Trojan players would be DeMarcus Ware, Sim Byrd, Jerrel Jernigan and Bear Woods.

“DeMarcus is probably the greatest Trojan player ever in terms of all of his accolades, but I think Carlton Martial is going to get into that echelon by the time he’s done this year. I truly do not think we are talking about Troy the same way we do now without Sim Byrd and all of those guys from those late 1960s teams because they helped build such a great foundation. Jernigan is still one of the best receivers I’ve ever seen play. It was so much fun to be at Troy the same time that he was because him on the offensive side of the ball was just electric. Bear didn’t have the stats that I think get associated with a great player but I’ve never seen anyone become the heart of a defense quite like him.”