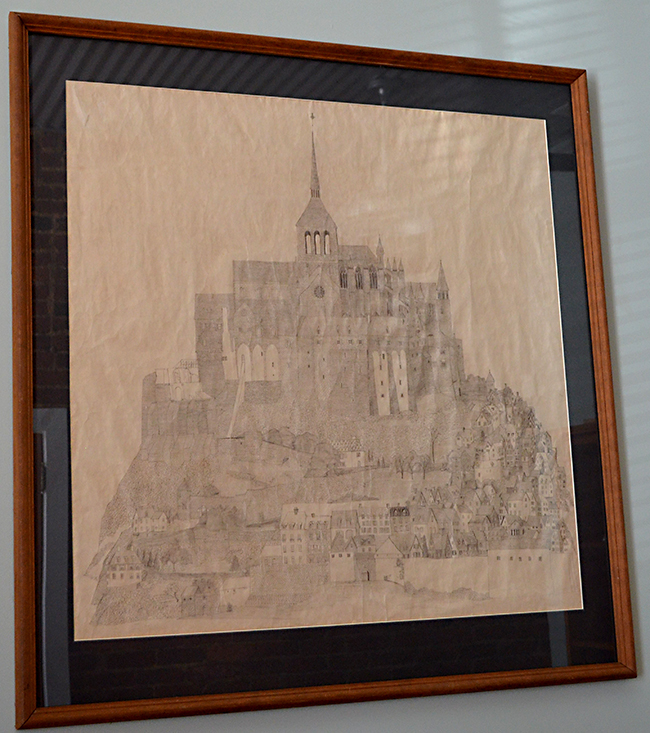 When The Messenger moved from South Brundidge Street to Troy’s downtown square, along came many of the comforts of home, including a framed graphite drawing of an obscure castle that had hung in the newspaper’s conference room for who knows how long.

What it is? Who did it? Why does the Messenger have it?

Duke, a longtime member of the Troy Arts Council, didn’t hesitate to share her best remembrance.

The best way to publically exhibit the large collection of artwork was to display it at local businesses. So, the TAC Permanent Art Collection was ‘framed out,” so to speak.

“That’s how Tim’s graphite drawing of the castle came to hang in The Messenger office,” Duke said, adding that her best recollection is that the drawing was from an early art show, Festival in the Park, held at Troy’s Murphree Park around 1982.

“It was probably a purchaser’s award,” Duke said. “For a time, the drawing was either lost or stored at the old Troy High School. It resurfaced around 1999.”

Tim Vaught’s castle with buildings in the foreground was probably drawn on shelf or rock paper and is preserved under glass and with a wood frame, Duke said and is of Abbey of Mont-Saint-Michel in Normandy, France. The site is an island topped by a gravity-defying abbey. The Mont-Saint-Michel and its bay are among France’s most stunning sights and has, for centuries, been one of Europe’s major pilgrimage destinations.

Vaught, now a professional artist who resides in Monroeville, laughingly, said he doesn’t remember much about the drawing.

“I was an art student at Charles Henderson High School and I was about 15 years old when I entered the student art show at Murphree Park,” Vaught said. “That was back in 1981. I didn’t know what happened to the drawing.”

The drawing is 42X50 inches and done with countless pencil strokes.

“I don’t know why I entered the student art show but I was pleased to have received an art award,” Vaught said. “I judged an art show in Troy a couple of years ago and enjoyed being back.”

After a 20-year career in architecture, Vaught put down the drafting mouse and picked up the paint brush. Vaught uses oil and paints almost exclusively in plein air and studio settings.