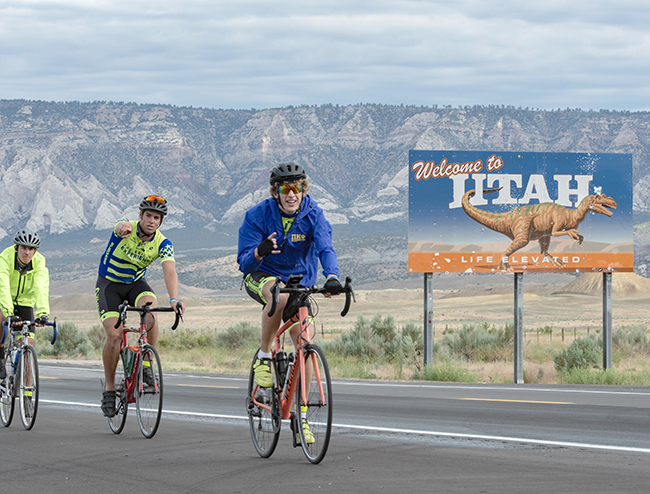 Contributed Photo What lies ahead: The Journey of Hope 2022 cyclists will now bike through Iowa, Wisconsin, Illinois, Indiana, Michigan, Ohio, Pennsylvania and Maryland before finishing the 3,735-mile journey in Washington, DC on August 13. Russ Oliver of Troy, front) is picturing leaving Utah and Colorado bound.

Editor’s Note: Russ Oliver of Troy is on a 3,735-mile bicycle Journey of Hope across America. He left Troy on June 9 and today, July 16, he will complete 2,185 miles of the Pi Kappa Phi philanthropy in Des Moines Iowa, where the bikers will have a day off the road.  Russ continues to share his experiences with the Troy Messenger. His journey will be completed on Saturday, August 13, in Washington, DC.

For the most part, Russ said all of the bikers have gotten very conditioned to riding every day. A lot of days there is not even any pain unless there is a lot of climbing with long distances of (80 to 100-plus miles.)

“Some days our butts will hurt and other days they won’t. It’s pretty random but that is really the only bad thing,” Russ said. “Our legs and mental got conditioned a long time ago. Honestly, the hardest part of every day is waking up early, getting ready, and getting on the bike. Once we are on the bikes though, it’s always a great day.”

In the last update, the Journey of Hope 2022 bikers had made it through California and Nevada.

“Now, after tomorrow, after two weeks of being in Utah and Colorado, we will be in Nebraska where we will see nothing but corn for a week. I’m still excited to see new terrain though. One positive thing is that we are done climbing mountains until we hit the Appalachians in Pennsylvania,” Russ said. “Utah was extremely beautiful, especially Salt Lake City and Park City. I was blown away by the beauty of the terrain. I was expecting Colorado to be beautiful but, when we crossed over, it was not what I expected. The hills and scenery were bare, it was cloudy, and we cycled through rolling hills for 125 miles to gain a total of 6,000 elevation, which was honestly much worse than doing a long climb with a big descent. However, the next day we went into Steamboat Springs, and then the next into Winter Park.  I was amazed by the beauty of the mountains and nature. My favorite part of Colorado was probably climbing up to the Continental Divide on the way to Golden, which was the highest point of the trip, 11,307 feet. I see why Colorado gets the love it gets.

“When we were in Salt Lake we got to meet a young teen named Travis Carpenter who has Neurofibromatosis, a condition that causes tumors to form in the brain, spinal cord, and nerves. We got to tour the state of the art Shriners Children’s Hospital where he has spent a lot of time over the years. What stuck out to me is that he made the decision at age 12 to amputate his leg because it kept breaking due to his condition. He is a true inspiration to all of us.

“We also got to attend a charity event in Denver called Pedal for Pennies where Special Olympic athletes race on bikes. We got to be their racing partners. I had the privilege to ride with a lady named Hanna who has Down syndrome. She was an amazing cyclist and we ended up winning first place. She has also been written up multiple times in Lady Gaga’s book, ‘Channel Kindness.’

“As we go further down the road, whether through pretty or bare terrain, the trip continues to amaze me and gets even better than it was the day before. I can’t wait to experience the Friendship visits and scenery that lies ahead.”