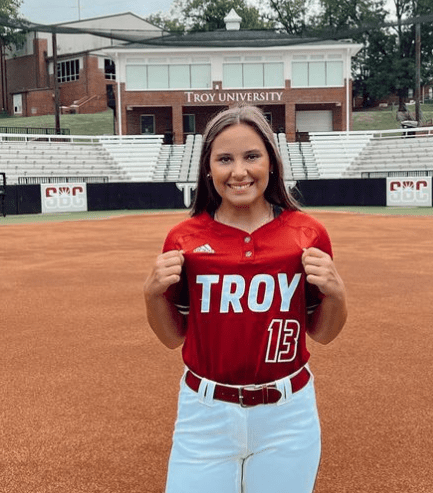 After originally signing with the University of Auburn-Montgomery (AUM) as a senior, Enterprise High School catcher Emma Faulk announced on Thursday her intention to begin her college career at Troy University instead.

Faulk was a big part of Enterprise’s success over the past four years from her catcher position and as a senior, she earned a .368 batting average with 14 doubles, two home runs, 31 RBIs and 13 runs scored. She also boasted a .988 fielding percentage on defense. For her Lady Cat career, Faulk held a .329 batting average with 58 RBIs, 19 doubles, three triples, eight homers and a .476 on-base percentage.

In June, Troy hired AUM coach Eric Newell to serve as the school’s new head coach, bringing his National Championship experienced to Troy with him. Newell was a key reason that Faulk originally signed with AUM and his decision to come to Troy, made her think about pursuing an opportunity to join him.

“Coach Newell is at Troy now and, while AUM is a great place, I wanted to play for him from the start,” Faulk said. “I loved AUM from the start but Coach Newell was one of the main reasons I decided to go there. When he moved to Troy I was like, ‘That opens another door for something else for me.’ I think Troy is a great opportunity for me. It’s a Division I school, so when he asked me to come I was all for it.” 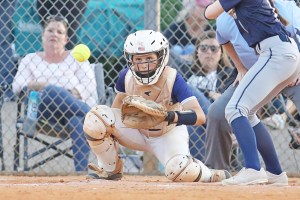 Recently, Faulk was a part of the Wiregrass All-Star Team that faced off against the Australian National Softball Team. Nearly 2,000 fans packed into Dothan’s Westgate Park to watch Faulk and her teammates compete with the Aussie Spirits ahead of the Sprits’ appearance in the World Games in Birmingham this month.

“It was one of the craziest experiences of my life because so many people came,” Faulk remembered. “All of us girls had never been a part of something so big, with so much support, and it was one of the most incredible experiences. All the Aussies were nice and such great ball players, so it was a great thing for us to experience.”

The Aussie Spirits went on to finish in fourth place in the World Games, falling to Chinese Taipei (Taiwan) in the Bronze Medal game.

Now, Faulk sets her attention to getting on the field at Troy next spring.

“Obviously, I want to get a good education and better myself as a person (at Troy) but I really want to be a big part of the team and help win a championship.”