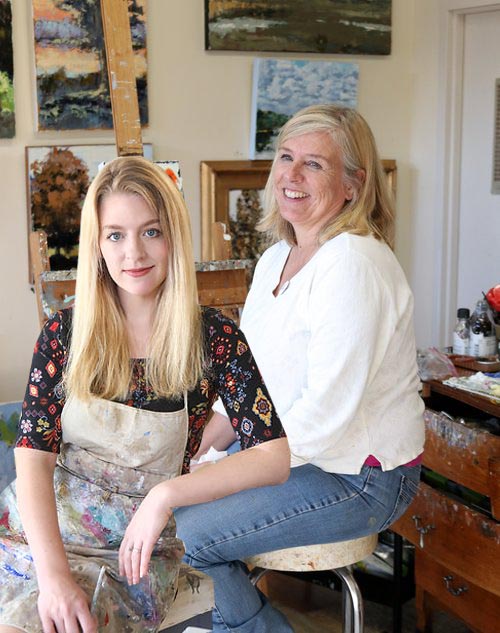 Contributed Photo Lorrie and  Liz Lane are an amazing mother/daughter duo who have teamed up for “The Art That Follows” now at the Jonson Center for the Arts.

After a very successful exhibition of mother and daughter’s artwork; Ann Strand, Ann Catherine Reeves and Ann Smith Reeves; the Johnson Center for the Arts is once again featuring a mother/daughter artists duo in the summer exhibition, “The Art That Follows.”

Alabama artists, Lorri Lane and her daughter, Liz Lane, are the artists whose exhibit is already receiving rave reviews from Brenda Campbell, JCA director,  her staff and those who have scurried to be among the first to view “The Art That Follows.”

The mother/daughter exhibition will close on August 4 with a reception honoring Lori Lane and Liz Lane. Everyone is invite to come meet the artists and learn more about their artwork and their passion for the arts.

Lori Lane quickly captures the attention of her viewers with a rather bash statement. “I (do) it my way and then I read the directions.”

Campbell said Lorri Lane’s way is better than any directions she could have read or received.

“Lorri is a self-taught improvisational realist oil painter,” Campbell said. “She began painting as a child in upstate New York.  After attaining a degree in English from Smith College, Lorri had planned on becoming a writer.”

But In the mid-eighties, she found her Southern roots in Alabama where she has been working as a professional artist ever since.

“There are periods of time when poetry and petite narratives still flow out of Lorri but, nonetheless, she is an artist every day and in most every way,” Campbell said.

Those who view Lorri Lane’s artwork, whether those who crate art or those who just enjoy and appreciate art, don’t forget her name or her art.

Lorrie’s recent projects include teaching mural classes with the Alabama Prison Art and Education Project and curating rotating exhibits at the Betak/Frangoulis Gallery at Canterbury Chapel and Tuscaloosa Juvenile Court Lobby.  Her exhibitions include the Kentuck Studio Artists at the University of Alabama gallery, the Dinah Washington Cultural Arts Center and  a solo exhibit of paintings at Tuscaloosa’s Hotel Indigo through August. She is represented by her daughter’s gallery, Liz Lane Gallery in Birmingham.

Liz Lane is a nationally known painter and chief executive officer of Liz Lane Gallery, a contemporary art gallery in Homewood with a second location in Asheville, North Carolina to open soon. Her studios are located inside her galleries. Liz Lane also represents a carefully curated collection of other emerging and well known artists, including her mother.

Campbell said each piece Liz Lane creates pulls from the moment it is created. Therefore, each piece is unique in inspiration and thought.

“Liz Lane’s brush, it has been said, performs a dance on canvas,” Campbell said. “It is expressive, powerful and unhindered by rules, much as her mother’s is by direction.”

Liz Lane said her work and philosophy have been deepened by the birth of her two daughters and a strong call to leave the world a better place for them to thrive in. She said there is urgency to protecting the changing climate and believes environmental reform must take place now.

Liz Lane has hosted events benefiting  environmental groups including organizations that fight for clean air and waterways in the state of Alabama. She is open to ideas and collaborations with environmental groups whose mission is to protect and serve the next generation.

She is also a proud sponsor of the arts in local, under served communities. She donates supplies to art educators to working with limited budgets in public schools.

“A society that does not value the arts has lost its humanity,” Liz Lane said.

As a second generation female artist, Liz Lane is aware of the lack of exposure and resources given to women in the arts. She has chosen to have a female majority of artists in her galleries.

She curates work from artists, male or female, who celebrate the strength of femininity.