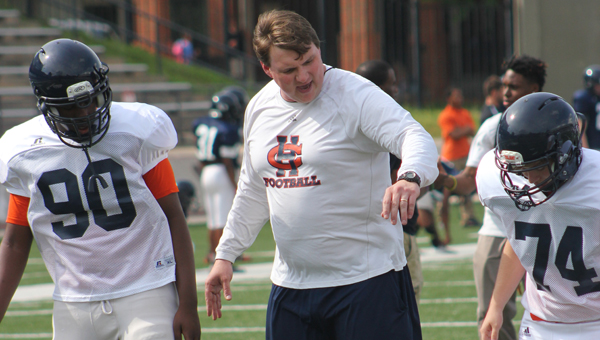 Editor’s note: This is the first part in a series featuring former local high school and Troy University football players that have gone into coaching.

The Satsuma job is Jordan’s first head coaching gig but the Goshen native has been involved in coaching since his playing days ended. Jordan grew up in Goshen and was both Alabama Sports Writers Association (ASWA) and Birmingham News All-State honorable mention as an offensive lineman in 1997 with Goshen High School.

His playing career continued at Troy State University, where he played under legendary head coach Larry Blakeney in college, as well. At Troy, Jordan was a member of the team when the Trojans transitioned from FCS (Division I-AA) to FBS (Division I-A) and was a part of a Southland Conference Championship in 1999.

“Us making the transition from the FCS to FBS would be the biggest memory of my time at Troy,” Jordan recalled. “My signing class was the first class they signed after making that announcement that the school was moving to FBS. We were juniors when Troy finally made that move (in 2001).”

Jordan also pointed to the expansion of Veteran’s Memorial Stadium as a big memory for him. 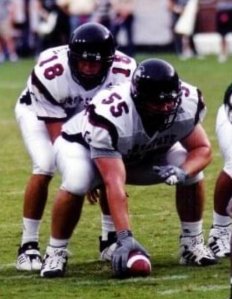 Jordan was an offensive lineman at Troy State. (Submitted photo)

“That first summer before my freshman year they started building the upper deck on the home side. Being from Goshen, I remember when that stadium sat just 12,500 people in Division II games,” Jordan said. “That upper deck to me was a big deal. That made it feel like a big time atmosphere. To go from when I was a child seeing that stadium to my freshman year was so great. Also, my last game as a Trojan was against Utah State in 2002 when they were rebuilding the visitor side and the whole field was like a big ‘Mud Bowl’ for that last game because they had filled in where the visitor’s stands were with dirt.”

Troy University got its start as a school for teachers, so it’s fitting that Jordan – a part of a teaching family – played in college at Troy. Not only did he become a coach –a form of teaching – but he earned five different teaching certifications, as well. Jordan said that his future occupation was never in question to him.

“Troy was a teacher’s school and my grandmother, my mom and my sister were all teachers,” Jordan said. “I knew I wanted to be a coach from the time I was a small child, so I never questioned it.”

Following his playing days, Jordan began his coaching career in Georgia for three years at Northwest Whitfield High School in Tunnel Hill, GA when legendary Troy player and former assistant coach, Mike Turk, helped him get a job at the school. Jordan then joined the staff at Mary G. Montgomery in 2006 as offensive line coach and joined the staff at Alma Bryant in 2010.

In the spring of 2012, Troy University played another part in Jordan’s future even if he wasn’t aware of it just yet. Troy hired Chanda Rigby to coach the women’s basketball team and as a result her husband, Ed Rigby, joined the staff at Goshen High School as the school’s offensive coordinator. Rigby was a successful veteran high school and junior college football coach that had most recently led Tate High School in Pensacola. Jordan also returned to his alma mater that summer as offensive line coach.

“I made the decision to move closer to my parents and both of us took assistant coaching jobs at Goshen at the same time,” Jordan remembered. “There were a lot of things we had in common and we struck a friendship there.”

After one year at Goshen, Rigby accepted the head coaching job at Elba and Jordan became offensive coordinator at Charles Henderson High School for three years. During his time at CHHS, twice Jordan served as interim head coach between head coaching hires, as well. Jordan joined Rigby’s staff at Elba  and then followed Rigby to Eufaula when he was hired there. Jordan held the titles of offensive coordinator, strength and conditioning coach and assistant head coach at Eufaula. 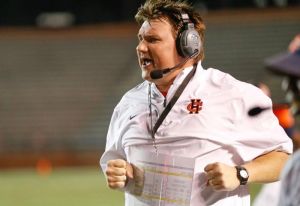 Jordan has been an assistant coach at a number of schools including Charles Henderson, Goshen, Elba and Eufaula. (Submitted photo)

“The thing about Rodney is he’s a student of the game of football,” Rigby emphasized. “Every one will say that about people but he is the ‘Real McCoy.’ There isn’t a day that goes by in his life that he doesn’t think or do something pertaining to the sport of football; that is him.

“There is no high school coordinator in the State of Alabama that spent more time on perfecting and being prepared than him. He could work at any (Division I) institution and would fit right in right now with the amount of preparation for games and for practices. It’s wild the amount of effort he puts into it and being that prepared trickles down to the players.”

From the coaches he played for, like Julius Head and Johnny Dunn at Goshen and Larry Blakeney, Mike Turk and Greg Adkins at Troy, to the coaches he’s worked for, Jordan said they all had an impact on his career. Rigby, though, had the biggest.

“Everyone has had an impact on me dating back to high school and every head coach I’ve worked for I took things from but I took the most from Coach Rigby overall,” Jordan said. “I’ve told people that I felt like Coach Rigby was more of a finishing school for me as a coach. He’s good with the schematics and all of that but how he deals with people and how he runs the weight room and everything in the program is really what I learned.

“I was used to being a part of programs that practiced for long hours but every practice we had (with Rigby) was for 90 minutes. We didn’t take it easy but we were super organized and didn’t waste any time. I was able to learn the basics of keeping your players legs fresh, so they’re ready on game night and that really opened my eyes. I’m a totally different coach as far as learning not to over do your players, so they can be fresh for the game.”

Once Rigby took the Pike Road job this offseason, Jordan began looking to take on a head-coaching role and was ultimately hired at Satsuma for his first job as the head man.

“He will be very successful,” Rigby flatly said of Jordan. “No. 1, you won’t outwork him or out prepare him, that is a fact. As he grows that program and the kids get to know him and his passion for this game and they see the development of the players they will fall in love with him.

“It will take time but he will set that district on fire. It’s all about patience, I say this all a time but how do you eat an elephant? One bit at a time, it takes patience. He will be very patient because I know him and he will build that program the right way. I’m so excited for him and so happy for him, because I know what he brings to the table as a head coach, but also because I know what it means to him and I know the effort he has put into being a great high school football coach and he’s very deserving of this opportunity.”

Jordan inherits a program at Satsuma that won just one game in 2021 and has made the playoffs just once in the past five years, and just twice in the past 15 years. Jordan said getting to the playoffs is the ultimate goal and pointed to convincing athletes at Satsuma that may play other sports to give football a chance as being another goal for him.

“I want to make this program a consistent playoff program,” Jordan emphatically said. “There’s kids in the hallways in this school that play a sport but may not play multiple sports. What I’m selling to these kids is stories from my experience as a coach of young people that made that decision to play multiple sports and how that benefited them.

“At Eufaula, Hess Horne was a baseball player in the ninth grade that was a baseball first guy but he played football and ended up becoming our starting quarterback his sophomore year. He decided that he enjoyed football and felt like he could be a Division I quarterback. I decided I would do everything in my control to help him reach that goal and now he’s a quarterback at Missouri State under Bobby Petrino. We want to talk about changing kids’ lives and helping them create opportunities for themselves, that’s what I’m selling.”