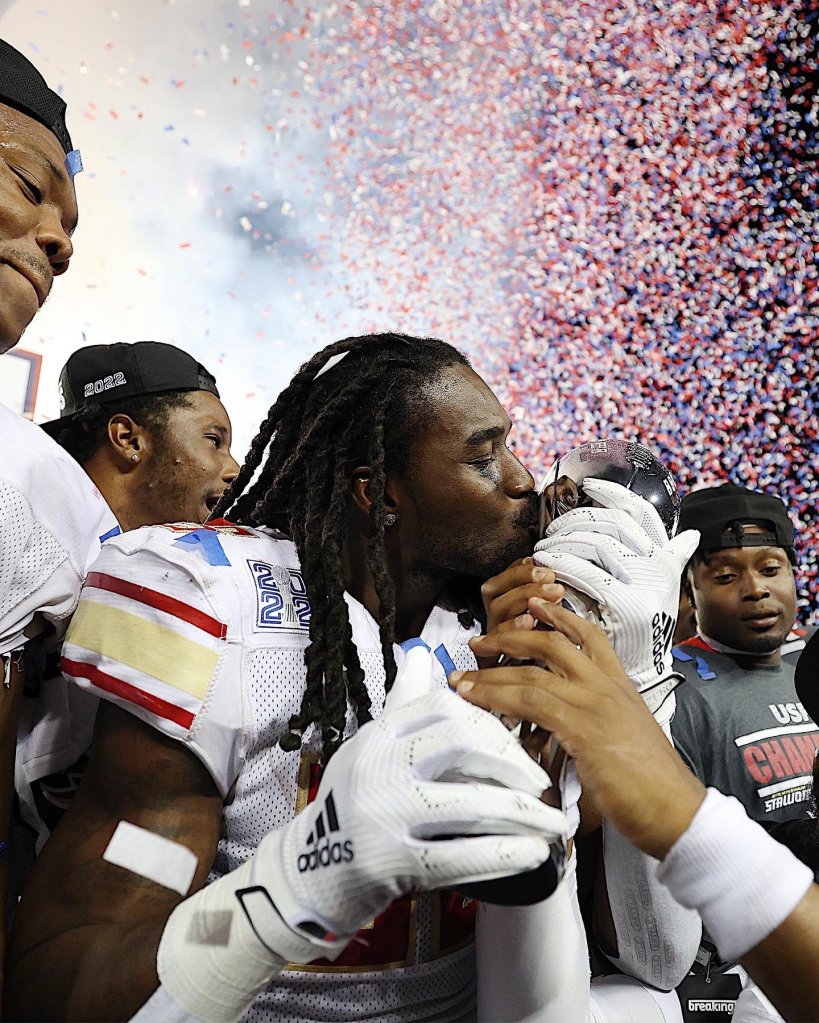 The Birmingham Stallions (11-1) capped off the inaugural season of the rebirth of the United States Football League on Sunday with an exciting 33-30 win over the Philadelphia Stars (7-5) to win the 2022 USFL Championship.

Despite both teams suffering a rash of injuries throughout the game – including both starting quarterbacks leaving the game in the second half – the championship featured a number of momentum swings and big plays, none bigger than Birmingham linebacker Scooby Wright’s interception return for a touchdown that gave the Stallions a 33-23 lead with just over three minutes remaining.

Wright intercepted Philadelphia backup quarterback KJ Costello and raced 46 yards for the score. The Stars weren’t ready to pack it in just yet, however. Costello – a former Mississippi State quarterback – drove the Stars right down the field and threw a 12-yard touchdown pass with 1:47 left to cut the Stallion lead to 33-30.

In the USFL, teams can attempt to keep the ball after scoring by going for a 4th-and-12 at the spot where a kickoff would occur – the 33-yard line – and the Stars attempted the conversion only for Stallion defender Tae Hayes to bat the ball down.

Birmingham faced a fourth down with just under a minute remaining but All-USFL kicker Brandon Aubrey had missed two field goal attempts and a PAT during the game, so Birmingham coach Skip Holtz opted to punt instead.

Birmingham’s J’Mar Smith heaved a 41-yard touchdown pass to wide-open Mobile native Marlon Williams with 7:22 left in the half to extend the Stallion lead to 17-9. Scarbrough then rattled off an eye-popping 70-yard run that led to a 28-yard field goal from Aubrey to give Birmingham a 20-9 lead at halftime.

Philadelphia began to heat up in the second half. The Stars cut the Birmingham lead to 20-15 on a 4-yard touchdown pass from Cookus. Philly attempted a two-point try but the Stallion defense held. Aubrey then missed a 38-yard field goal and a few plays later, Cookus threw a 12-yard touchdown pass to put the Stars up 21-20. Cookus converted a two-point try to extend the lead to three points with 11:24 left in the game.

Both Cookus and Smith suffered injuries in the second half that took them out of the remainder of the game. Birmingham retook the lead 26-23 on an 8-yard touchdown pass from Alex McGough to Victor Bolden Jr. with 3:16 left. The PAT was no good, however. Wright’s pick six occurred just 13 seconds later.

Birmingham’s championship brings a professional championship back to the State of Alabama for the first time since the Birmingham Americans won the 1974 World Bowl in the World Football League.