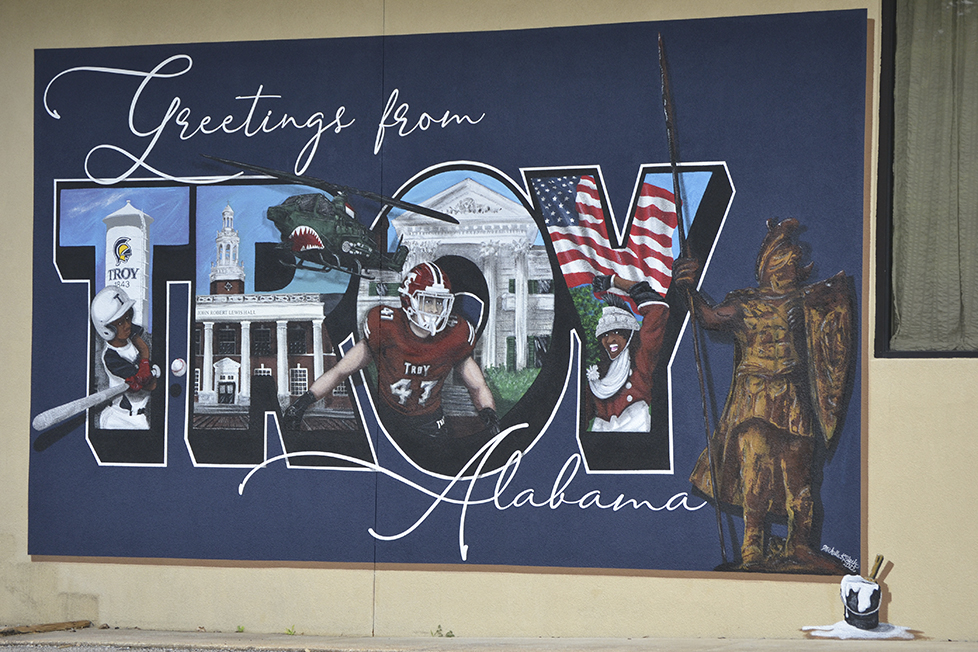 The new postcard style mural in Troy was painted by Georgiana artist Michelle Black of A Color Affair Murals. (Photo by Josh Boutwell)

A new city mural in downtown Troy was recently completed bringing some more color to the downtown area.

The completion of the mural is the culmination of a yearlong collaboration between the City of Troy, the Keep Troy Beautiful organization and Black. According to Keep Troy Beautiful, Premier Chrysler, Dodge, Jeep, Ram of Troy sponsored the mural and Lindsay Darrnell of Hazel’s Gifts and Engraving allowed the city to use the side of their building for the painting, as well.

“They had an idea of what they wanted and we went back and forth designing and redesigning until we got it right,” Black said. “They sent me their ideas and I put it on paper to show them what it would look like and we could change and rearrange things from there.”

As Black was able to finally get started on the project in May, the weather had different ideas for a mural that was expected to take less than two weeks to complete.

“It took a long time to paint it because of the rain situation,” she said. “It only took about 10 actual full days to complete it but we were getting rain almost every day, so that delayed it some. I should have been done with it within two weeks but it took about a month because of the weather.”

Despite the frustration of the uncooperative weather, Black said she was pleased with the final product. 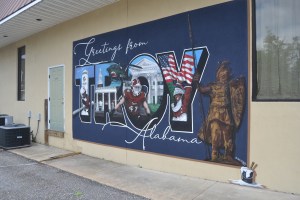 The new Troy mural depicts landmarks from around the city. (Photo by Josh Boutwell)

“I liked it,” she flatly said. “It’s powerful for four little letters. It’s the shortest word I’ve ever painted so far but they wanted it to look like a postcard and I think it came out really well.”

Black has painted murals for a number of cities and towns, including for Luverne, Greenville and her hometown of Monroe, GA. She also recently completed window paintings for businesses in both Brundidge and Troy. Ironically enough, her business started by accident.

“I painted my son’s name on his wall and put a basketball, football and baseball on it,” she recalled. “My husband told me I should take a picture of it and put it on Craigslist to see if anyone wanted me to paint their kid’s name. That’s how it happened.

Black’s A Color Affair and Old School Studios can be found in Georgiana, specializing in custom banners, decals, flyers and vinyl signs along with the mural and window art.

The new postcard mural is now one of a number of murals scattered across downtown Troy. Anyone looking to take a selfie with the new mural or anyone that just wants to check it out, can do so by going to Hazel’s Gifts and Engraving at 101 West Elm St. in Troy. A list of the other downtown murals can also be found at troy.al/downtownmurals.