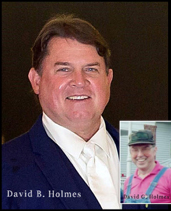 David Bruce Holmes, age 61 of Mobile, AL, was called home to the Lord on Sunday, March 6, 2022. A graveside service will be held at Lakeview Cemetery, Brundidge, AL on Friday, July 1, 2022 at 10:30 AM officiated by Reverend Louis Johnson. In lieu of flowers, donations may be made to Brundidge Public Library.

The inurnment will be honoring both David Bruce and his father, David Grover Holmes. David G. Holmes was born August 21, 1938 and passed May 4, 2007. His parents were Roy and Bama Irene Holmes; siblings, Juanita Bush and Betty Botts; and children, David B. (Susan) Holmes, Brent Holmes, and Heather (Rex) Alexander.