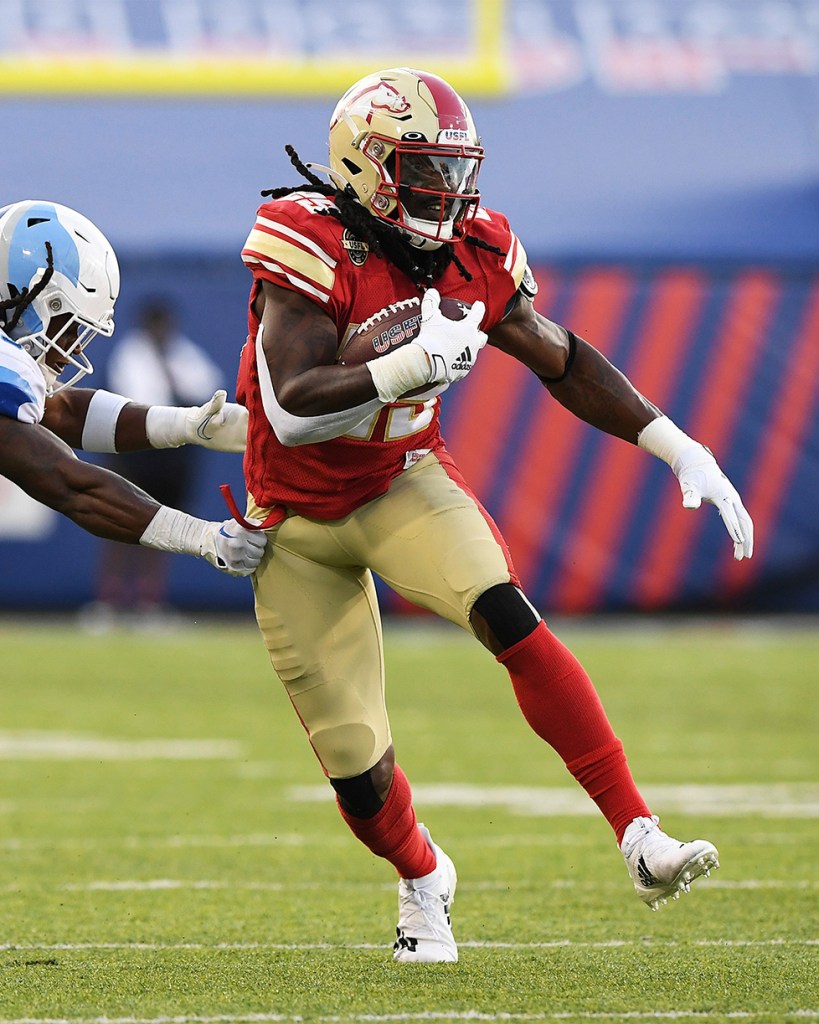 Bo Scarbrough and the Birmingham Stallions will face the Philadelphia Stars in the USFL Championship this weekend. (Photo courtesy of the USFL)

The Birmingham Stallions (9-1) knocked off the New Orleans Breakers (6-4) by a score of 31-17 in the USFL South Division Championship game to advance to the USFL Championship.

Against the Breakers, the Stallions fell behind 7-0 in the first quarter before Birmingham’s J’Mar Smith found a wide open Osirus Mitchell for a 23-yard touchdown pass with 14:55 left in the first half to tie the score. A few plays later, Stallion linebacker DeMarquis Gates intercepted New Orleans quarterback Kyle Sloter’s pass and returned it 71 yards for a touchdown to give the Stallions a 14-7 lead.

With just 1:15 left in the first half, Sloter threw a 35-yard touchdown pass to Jordan Ellis to tie the score but the Stallions came stampeding back when All-USFL kick returner Victor Bolden Jr. returned the ensuing kickoff 90 yards for a touchdown to put Birmingham up 21-14 just before halftime.

In the third quarter, the Breakers cut the lead to 21-17 with a 23-yard field goal but Birmingham extended it right back to 24-17 with a 38-yard field goal to open the fourth quarter. Birmingham had just two drives in the fourth quarter, both scoring drives and both 15-play drives, that bled the clock. On the Stallions’ final drive of the game, Smith capped it off with a 2-yard touchdown plunge with just 45 seconds remains to secure the 31-17 win.

Birmingham now advances to the USFL Championship against the Philadelphia Stars from Ohio’s Tom Benson Hall of Fame Stadium on Sunday, July 3, at 6:30 p.m. on FOX.